With focus on policing failures, how can the system better respond to mental-health crises? 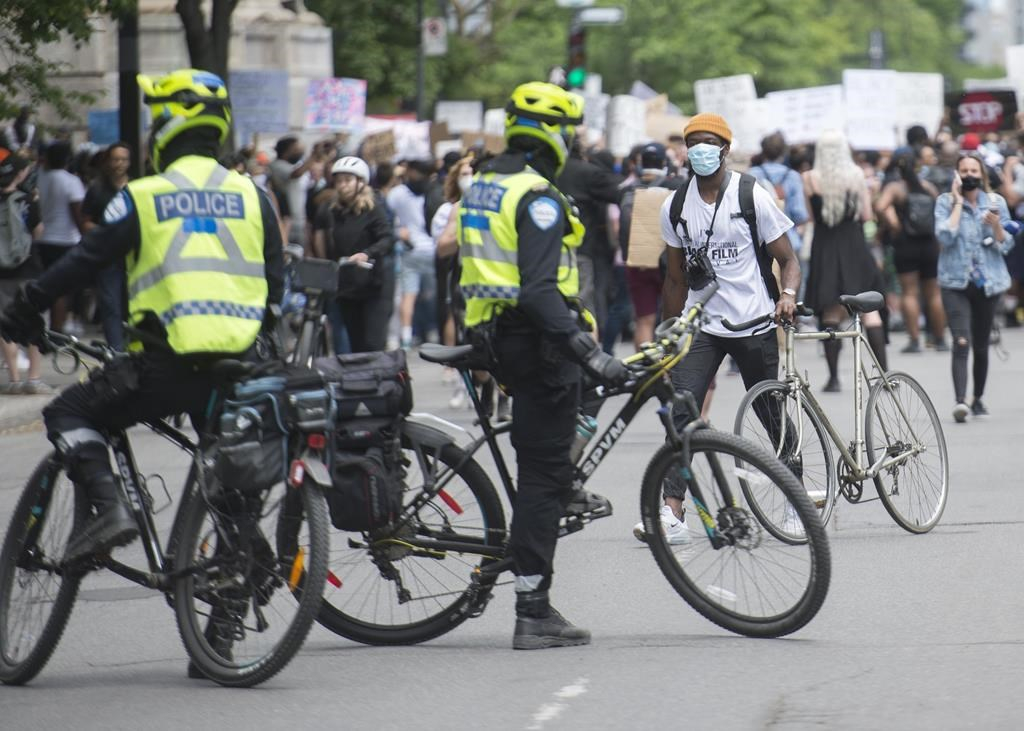 Police keep an eye protesters during a demonstration calling for justice for the death of George Floyd and all victims of police brutality, in Montreal on June 7, 2020. File photo by The Canadian Press/Graham Hughes
Previous story

When someone broke into her car earlier this month, Meenakshi Mannoe knew the potential consequences of calling police.

The Vancouver resident weighed several questions: Would she get her belongings back? Was it even worth the hassle? And the tipping point: What good would it ultimately do?

Ultimately, Mannoe believed it wasn't a big deal — she could easily replace her lost portable speaker and first aid kit, and she questioned the impact of calling the cops on someone desperate enough to take them.

"Is it an inconvenience? Absolutely. But I don't want to contribute to the over-criminalization of folks, or hyper-policing when I know that people are doing things just to get by, just to survive."

The decision was an easy one for Mannoe, well-versed in the myriad systemic forces that underlie day-to-day struggles of many as a campaign staffer with Pivot Legal Society, which examines police accountability, drug policy, homelessness, and sex workers' rights.

But they're questions she says we're increasingly facing as anger-fuelled protests draw fresh scrutiny over the prevalence of police brutality and systemic racism facing Black and Indigenous people.

The weekend killing of Rodney Levi near Metepenagiag, N.B., — the second Indigenous person to die at the hands of an officer in that province in less than a month — has only intensified calls to defund the police as a part of a holistic approach to re-define public safety and how it's achieved.

"I think this is a vital moment to really reframe what justice looks like and to heed calls from our courts like the Truth and Reconciliation Commission, or the Missing and Murdered Indigenous Women and Girls (national inquiry) and really look at: How do we create culturally safe and responsive Indigenous-led crisis intervention?"

When someone broke into her car earlier this month, Meenakshi Mannoe knew the potential consequences of calling police.

The defund movement doesn't mean abolishing police — although there are calls for that, too — but rather is an acknowledgment that law enforcement has ballooned to encompass far-ranging responsibilities it's incapable of addressing, says Toronto city councillor Kristyn Wong-Tam, who will introduce a motion later this month to cut Toronto's police budget by 10 per cent.

"In some ways, we have set them up to fail," says Wong-Tam, noting calls often involve people in the throes of a mental health crisis or substance abuse.

"Asking police officers to be the social worker that shows up on the doorstep armed with guns and pepper spray, I just don't think that has given us always the best outcome."

Levi was killed Friday night after RCMP say they responded to a complaint about an "unwanted person" at a home near Metepenagiag, about 30 kilometres west of Miramichi. Officers say they were confronted by a man carrying knives, and tried to subdue him with a stun gun. Levi was ultimately shot by an officer and declared dead in hospital.

Since then, Chief Bill Ward of the Metepenagiag Mi'kmaq Nation has said Levi was an invited guest at the home, where he had planned to seek guidance from a church minister.

Then there are the deaths of Chantel Moore, an Indigenous woman in Edmundston, N.B., who was shot by police who had come to perform a wellness check, and Regis Korchinski-Paquet, a Black woman who fell from her Toronto balcony after family members called police to her home.

The circumstances around each case have not been disclosed and are being examined by independent police investigation agencies. But experts say they highlight the myriad ways racial bias and mental-health stigma can make any police interaction dangerously fraught.

Especially for someone who is Black, Indigenous or a person of colour, the very presence of an armed officer could aggravate an already delicate situation, says the James R. Johnston chair in Black Canadian studies at Dalhousie University.

"When you have experiences, for example, in Toronto where Black men are 20 times more likely to be harmed or killed by police than (white) people, then yes, of course we're going to be anxious," says OmiSoore Dryden.

"And, you know, we don't all teach our children, 'Go to police,' that they will help them if they're lost or whatever," said Dryden. "We know not to do that."

Dryden says the very inception of policing was rooted in protecting property, which further institutionalized racism by enforcing slavery.

"For many that uniform is a symbol of harm and abuse and fear. It is not a symbol for care and kindness and support."

Just like the rest of society, police officers are vulnerable to conscious and unconscious biases that can cloud their judgment, says Jennifer Lavoie, an associate professor in criminology at Wilfrid Laurier University.

"That becomes problematic when you're a police officer and you have implicit biases that involve perceptions of threat or aggression or violence that are attached to specific populations such as BIPOC populations," says Lavoie.

"When you're approaching and providing services to a person they're more than their mental health crisis. It's important to approach that person holistically."

Nevertheless, calling 911 is the only option most people have when faced with a public safety crisis, even when someone is clearly in mental distress, Lavoie says.

Most cities have a patchwork of additional services that can respond to some emergency calls, but they are inconsistent and not always 24-hours, she notes.

Lavoie would like to see more funding for crisis intervention teams that many police services have across the country.

In Toronto, they're known as Mobile Crisis Intervention Teams, or MCIT, and involve a mental health nurse and a specially trained police officer. But they respond only if it's clear a weapon is not involved or if first-responding officers deems it safe for a nurse to arrive. Citizens also cannot call MCIT directly.

Wong-Tam says they are also overwhelmed by demand, noting the force receives roughly 30,000 calls a year related to mental health but that the MCIT only respond to about 6,000 calls a year.

Hamilton's Crisis Outreach and Support Team, known as COAST, includes a mobile team of a mental health professional and a plain-clothes police officer in an unmarked car, but it, too, is not 24-hours.

"There is a period of time where they're not available, and if they're on call, there's only so many units that are available," Lavoie says.

In Vancouver, Car 87 teams a police constable with a registered nurse or a registered psychiatric nurse to provide on-site assessments. Meanwhile, nurses can also help callers to a crisis line and triage situations to Car 87, ambulance or police.

As part of her research, Lavoie says she's developed a 40-hour training program being tested with Durham Region police in Ontario that uses scenario-based exercises with actors who portray "authentic mental health crises."

"That's the only way to really, I think, train officers on how to respond to a person in mental health crisis."

He'd like to see a portion of police funds reallocated to some sort of social services department within the force that could respond to such calls, but he'd also like to see "more use-of-force training, so they can perform more professionally."

He says most police services dedicate 10 to 12 hours a year towards firearms and hand-to-hand fighting skills.

"We have police officers that are rusty at use-of-force and then you have an incident where they have to use force and they don't perform properly," he says.

"And then people wonder, 'Why? Why does that officer behave like that? Aren't they trained?' And the answer is, 'Not really.'"

Wong-Tam would like to see funds diverted to affordable housing, career counselling, skills training, recreation youth programs and mental-health crisis support. She says a 10 per cent budget cut in Toronto would yield $122 million.

Mannoe agrees that addressing society's myriad inequalities would do more to reduce police interactions to begin with, but so, too, would a broader understanding of systemic forces that affect police and society's ability to hold them accountable.

"I think people are looking for this kind of big alternative system that's going to replace police but really it's just (about) turning our minds towards compassion for people who are in a bad place."

— With files from Adina Bresge

Clearly socio-economic disfunction is a trigger for life threatening situations. There is so much unrecognized, undiagnosed, untreated mental turmoil derived from systemic conditions of poverty, discrimination, inadequate responses from community and agencies, that are reaching the boiling over stage and which our governments our faith communities, our exploitative, "not my problem" economy, are dismally failing to address.

Mental disfunction does not erupt out of nowhere, it has long term, systemic and proximate causes. The judgemental, hardened responses of the justice system with its stranglehold on society, its reliance on punishment/vengeance/"lock 'em up" so-called remedies only exacerbates the destruction of humanity.

The institutionalisation of faith and spiritual leadership, the wilful ignorance, bigotry, bias, and inflamatory dogma of the hierarchy are anti-human influences on our morality, ethics and communal cohesiveness All such entities must re-examine the "foundations" of their belief systems before broadcasting their cockamamie theories.