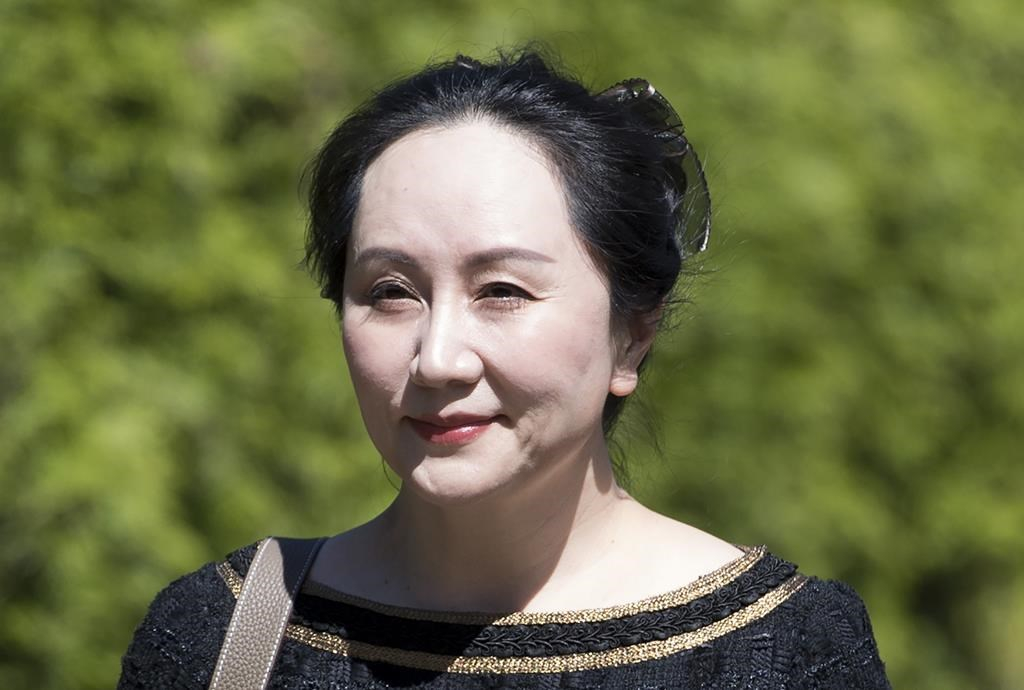 Meng Wanzhou, chief financial officer of Huawei, leaves her home to go to B.C. Supreme Court in Vancouver, on Wednesday, May 27, 2020. File photo by The Canadian Press/Jonathan Hayward
Previous story
Next story

Lawyers for Huawei's chief financial officer are accusing authorities in the United States of misleading the B.C. Supreme Court judge presiding over the extradition case.

Meng Wanzhou's defence team is seeking a stay in the proceedings arguing that U.S. case records are "grossly inaccurate and based on deliberate and/or reckless misstatements of fact and material omissions, thereby constituting a serious abuse of the extradition process."

The new claim was discussed during a case management conference convened Monday by Associate Chief Justice Heather Holmes to determine scheduling in the case.

Holmes indicated she wants to consider the evidence related to the new argument first as the case proceeds.

She said it's difficult to analyze the effects of any alleged misstatements or omissions until she has an understanding of the defence's evidence and the Crown's response.

The U.S. is seeking to extradite Meng on fraud charges based on allegations she lied to HSBC about Huawei's relationship with Skycom, a telecommunications company in Iran, putting the bank at risk of violating American sanctions against that country.

Meng and Huawei deny all the allegations in the case.

Holmes ruled last month that Meng's alleged offences would constitute a crime in Canada and the case should proceed to the next round of legal arguments.

The latest claim of abuse of process is one of three put forth by Meng's lawyers. The first two focus on the circumstances of her arrest at the Vancouver airport in December 2018 and statements made by U.S. President Donald Trump.

Lawyers for Huawei's chief financial officer are accusing authorities in the United States of misleading the B.C. Supreme Court judge presiding over the extradition case.

In a case management memo dated June 12, Meng's lawyers assert their client delivered a presentation to an HSBC banker in Hong Kong that included statements about Huawei's business activities in Iran, but the statements were omitted from U.S. records of the case.

They argue Meng's statements provided the bank with "the material facts it needed to know in order to assess whether there was any risk to HSBC in continuing to provide banking services to Huawei, including processing U.S. dollar transactions related to Huawei's commerce in Iran."

Defence lawyer David Martin acknowledged during Monday's conference that if a stay were not granted, an alternative outcome could be the redaction of some statements in the U.S. case records.

In addition to the latest claim of abuse of process, Meng's lawyers argue her arrest was unlawful. They allege Meng's charter rights were violated when she was detained by border officials who took her electronic devices and passwords, which were then shared with the RCMP before Meng was notified that she was under arrest.

The Crown has told the court that when the border agency learned of its mistake it told the RCMP that the codes couldn't be used or shared because they were obtained during the agency's examination.

The case was adjourned Monday until June 23 to give the Crown and defence time to discuss the scheduling of arguments moving forward.

Holmes expressed concern at the length of the proceedings, noting proposed schedules from both the Crown and Meng's counsel wouldn't see the case wrap up until next spring.

Even the most cursory review

Even the most cursory review of the Huawei case raises enough eyebrows at the malfeasance and obfuscation on all sides of the arguments to make one shake like a dog spraying mud and water everywhere. The mixture of global power and politics with financial chicanery and adolescent posturing, tit-for-tat "diplomacy" and sabre rattling is mind boggling and ample evidence of humanity's evolutionary failure to live up to its homo sapiens moniker. The clashing mutual stupidities of would-be dictators and world class testosterone ruled disruptors is a waste of every human involved. All the protagonists should be locked up until they can regain some sanity.