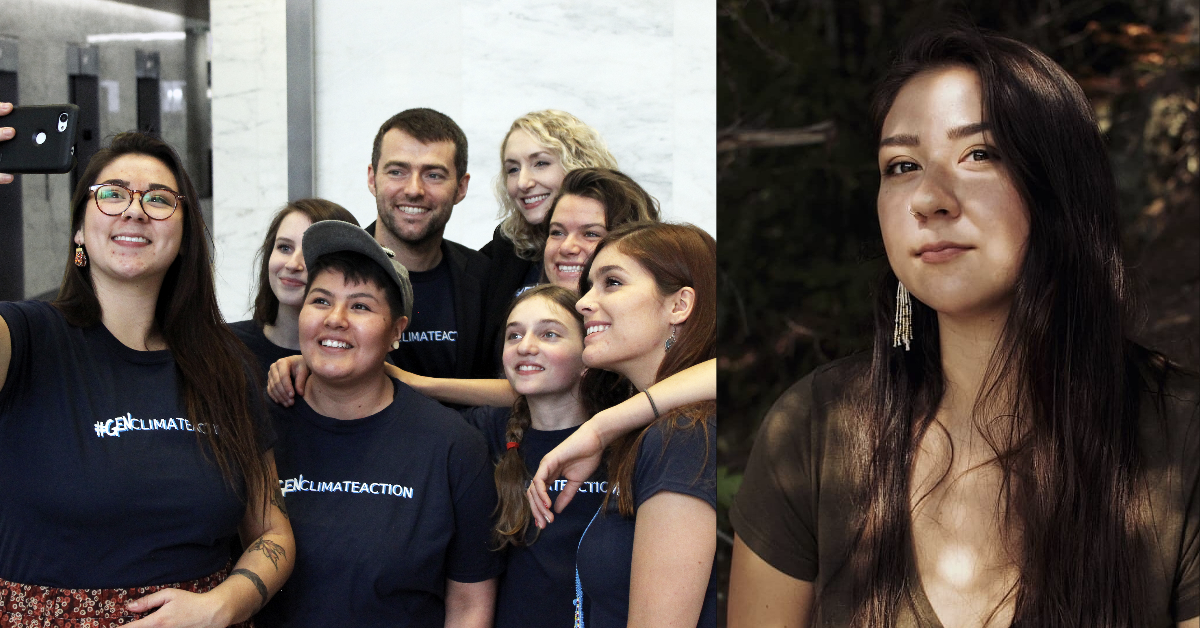 Shelby Gagnon (left) takes a selfie with other youth after filing their climate action challenge against the Ford government. Gagnon (right) outside her home in Thunder Bay
Previous story
Next story

Seven youth and the lawyers fighting to get Ontario’s Doug Ford government to face their constitutional complaints about climate inaction say the court is exactly where the battle should be waged.

And no matter if their next court date — scheduled for July 13 — is to be conducted in a reopened Toronto courtroom or virtually via video link, their lawyer wants it broadcast.

“This is a case as to whether the people, the citizenry, can go to court and force the government to do the bare minimum to combat climate change,” Nader Hasan, a lawyer for the applicants, said in an interview.

“It will either be in-person or it will be virtual with the ability of people anywhere to tune in and watch it,” he said. “We’ve made it very clear that we want this to be available to the public at large.”

They argue the government is threatening the lives and wellbeing of its population by failing to protect them from climate change, and the courts must decide whether that failure violates constitutional rights granted under the Charter.

In April, the government asked the court to throw out the case before it could proceed to a full hearing, where both sides would have the ability to put forward evidence and call on experts.

Hasan said Ford and his government were arguing that “no matter how dire climate change is, no matter what we’re capable of showing insofar as climate change is an existential threat to humanity, none of that matters because a court is not the right place to do anything about this issue and our courts are powerless to act.”

Government lawyers argue the adequacy of their emissions target should not be decided by a court, that it would be impossible to prove direct harm caused by Ontario’s climate policy, and that the applicants have no standing to seek legal remedy on behalf of future generations.

(Ford’s legal team is meanwhile awaiting a Supreme Court decision on its challenge to the constitutionality of the federal government’s carbon pricing scheme. It is due in September, delayed by COVID-19.)

Youth fighting Doug Ford's climate inaction say the court is exactly where the battle should be waged.

The youth and their legal team from Ecojustice and Stockwoods LLP were responding this week to the Progressive Conservative bid to have the Ontario Superior Court of Justice dismiss the climate action case.

The young people’s application argues that the Ford government's decisions to dismantle existing climate policy and replace it with much weaker legislation threatens the constitutional right to life, liberty and security of the person (section 7 of the Charter of Rights and Freedoms) and unfairly makes young people and future generations bear the brunt of the damage (section 15, about equality before the law).

They say Ontario has a legal duty to confront the climate crisis, which ample scientific evidence links to future harms, and that future generations should be included because “it would be unjust to burden future generations with an unwinnable fight.”

One of the applicants, Shelby Gagnon, from Thunder Bay, said she’s fighting out of concern that the climate crisis will hurt Indigenous Peoples’ ability to control their food supply and her ability to harvest traditional medicines.

“Over the last few months, I have coped with the uncertainty of living through a global pandemic by spending time on the land,” Gagnon, 23, said in a statement. “As a young, Anishinaabe person, I am deeply concerned that future generations will not have this option.”

Hasan said at a hearing on the merits he would expect to present a range of climate scientists and others who would lay out the case for how specific Ford government actions had created specific charter violations.

He said a full hearing could also include consideration of what counts as Ontario’s fair share of a worldwide ‘carbon budget.’

The office of the attorney general, Doug Downey, acknowledged receiving the filing but otherwise declined to comment.

Editor's note: This article was updated on June 17, 2020 at 10:11 a.m. to include attorney general's acknowledgement.

Kudos to these youth for

Kudos to these youth for taking this case to court!

Ford says they have no right

Ford says they have no right to go to court on behalf of future generations. Future generations?! It's happening NOW. A 20-year-old today has a reasonable expectation of living to 2090; the chance of climate change doing them in or seriously damaging their prosperity during that time approaches unity if nothing is done. Fair numbers of people have already been damaged. As a small instance, my wife, along with everyone in Greater Vancouver and much of BC, suffered some degree of lung damage from smoke inhalation due to global-warming-related hot summers causing widespread wildfires; this is likely to happen repeatedly over the coming years. Future generations my foot.