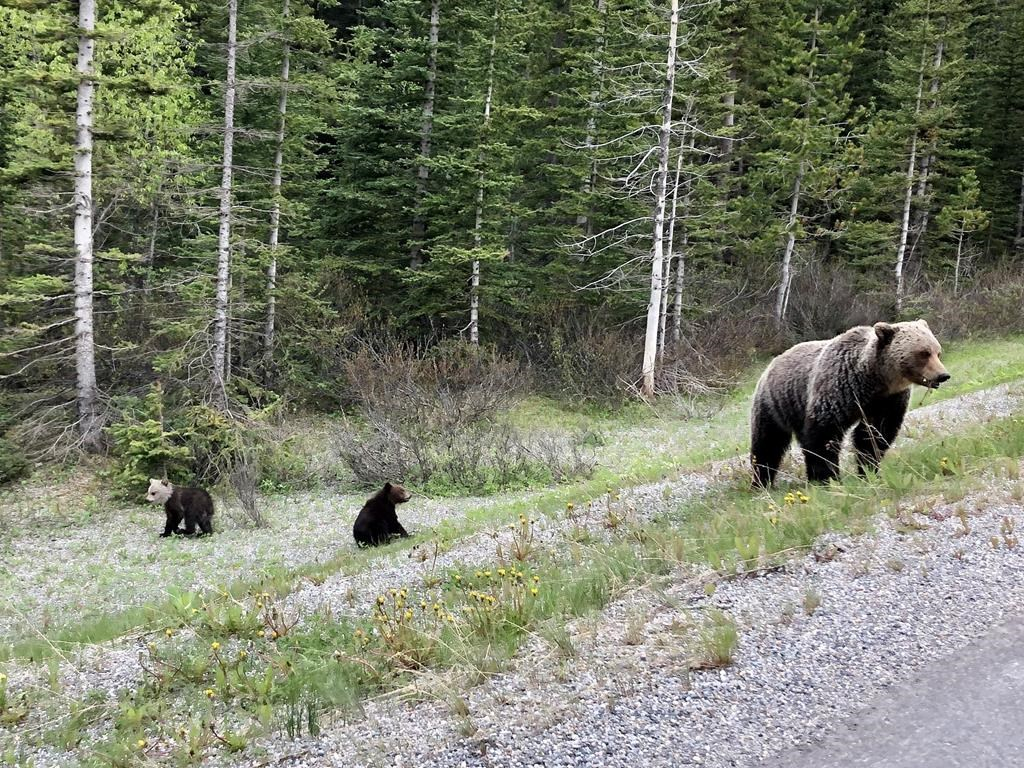 A second rare grizzly bear has been spotted in Banff National Park.

Earlier this spring, an unusual white grizzly bear was revealed publicly after it was seen by a Banff family along the Trans-Canada Highway in the national park in Alberta.

Another family from Calgary is now sharing a photo of a grizzly cub with a white head and a brown body.

"It was a very quick sighting," Julia Turner Butterwick said in an interview Tuesday.

She said her family, which includes two little boys, is always on the lookout for bears when they drive through the park. They saw a mama grizzly on the side of the road, so she asked her husband to slow down for her to take a photo.

"As we got closer, we saw there were two cubs beside her," said Turner Butterwick. "I said, 'That cub has a white head.'

Parks Canada said in a statement that the cub, its sibling and their mother are known to staff in both Banff and nearby Kootenay National Park on the British Columbia side of the boundary.

"One sibling is brown while the other is brown with a blonde head and chest," the agency said. "The blonde colour is caused by a colour phase variation which is unusual but natural."

A second rare grizzly bear has been spotted in Banff National Park.

The statement said the grizzlies are believed to be about six months old, so it would be their first year in the wild with their mother.

Concerns have already been raised about the all-white grizzly, a 3 1/2-year-old bear that has been nicknamed Nakoda by locals, because people have been getting too close to it to try to get a photo.

That bear has been seen hanging out on railway tracks and running across the Trans-Canada Highway in Yoho National Park, also adjacent to Banff on the B.C. side.

Paul Paquet, an internationally known carnivore expert, said he has never seen a white grizzly bear and the cub is even more unusual.

"I never could have imagined a white-headed grizzly," he said Tuesday. "This is really interesting.

"It looks like it stuck its head in a pail of cream or a barrel of flour."

Paquet said it's most likely a genetic trait.

He said it's more common to see white-coloured black bears in Alberta, but biologists keep the locations quiet because they can be hunted.

"White colour, especially in grizzly bears, is unheard of," he said. "I don't know of any grizzly bear biologist that has documented one ... but I stand to be corrected."

Gibeau said it would most likely be genetic.

"The right combination of recessive genes gives you white," he said, noting he has seen the all-white bear and it has dark-coloured underfur.

While it's possible the two bears are related, it's not necessarily the case, he said.

Gibeau said he's concerned the unusual bears will get harassed by wildlife photographers, visitors and locals.

"Thank goodness the borders are closed," he said, referring to restrictions due to the COVID-19 pandemic that are keeping away international media.

Parks Canada reiterated in Tuesday's statement that observing wildlife in its natural habitat is a privilege that comes with responsibility.

"If you see wildlife near the highway, do not stop," the agency said.

"When visitors see wildlife on other roads, stop only where legal and safe to do, stay in your vehicle and give the animal space. Bears and other wildlife that become comfortable around people and roadsides are at greater risk of being struck by a vehicle."

This report by The Canadian Press was first published June 16, 2020

I actually have pictures of

I actually have pictures of the "White Grizzly" from the summer of 2019 that I had taken myself.
The pictures were taken in Kananaskis, at Lower Lake Campground. Here's a link that should take you to the Google Map where you can see my photos, Lower Lake Campground
Kananaskis, AB
https://maps.app.goo.gl/91LEhkQ6Q9UNTG339
It was quite amazing as she was with Mama, and Brother bear. Being only 100m away was a little nerve racking, especially when I broke a small branch and Mama bear looked "directly" at me.
The reason I say it is the same bear as the more recent "white grizzly", is the location, and between her shoulders she has the same dark streak.