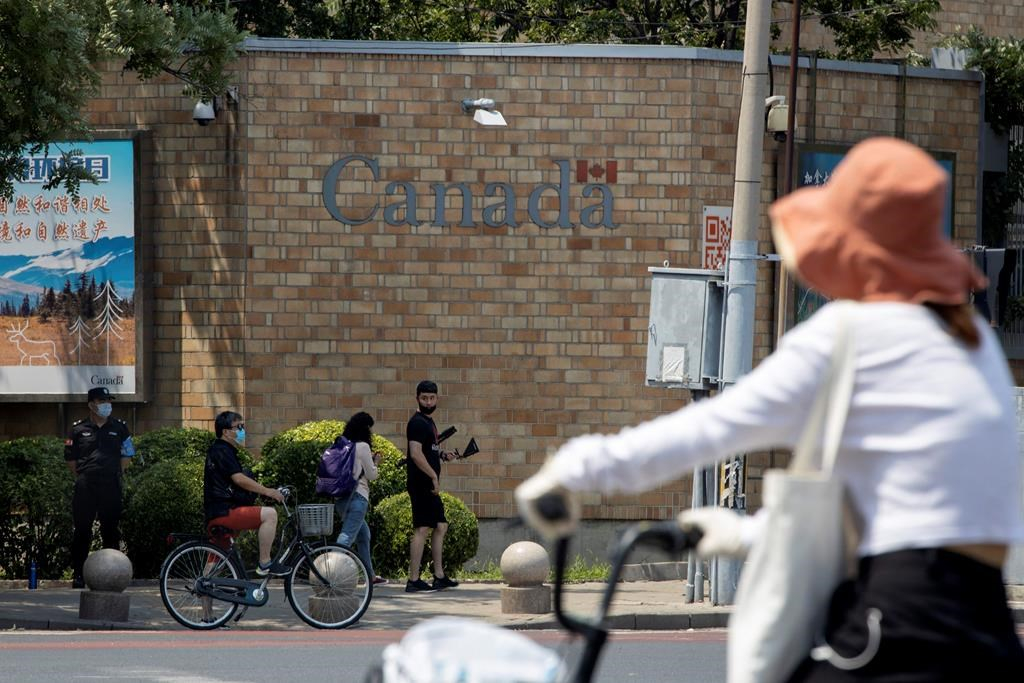 A security guard stands on duty as residents pass by the Canadian Embassy in Beijing on Friday, June 19, 2020. Photo by The Associated Press/Ng Han Guan
Previous story
Next story

China has charged two detained Canadians with spying, escalating tensions between the two countries following the arrest in Vancouver 18 months ago of a senior Huawei executive wanted on U.S. charges.

Chinese prosecutors said Friday that Michael Kovrig was charged in Beijing on suspicion of spying for state secrets and intelligence.

Michael Spavor was charged in Dandong city near the North Korean border on suspicion of spying for a foreign entity and illegally providing state secrets.

Both men have been held since December 2018 in a move seen as an apparent attempt to pressure Canada to release Meng Wanzhou, a top executive at Chinese tech giant Huawei.

China has denied any explicit link between her case and the lengthy detention of the two Canadian men, but outside experts see them as tied and Chinese diplomats have strongly implied a connection.

The daughter of Huawei's founder was arrested at Vancouver's airport on Dec. 1, 2018, at the request of U.S. authorities who want her on fraud charges, which she and the company have denied.

Meng is out on bail as hearings are ongoing in B.C. Supreme Court after a judge rejected the first set of arguments from her lawyers late last month in a bid to set her free.

Associate Chief Justice Heather Holmes ruled Meng's alleged offences would constitute a crime in Canada and the case should proceed.

The next round of legal arguments is set to focus on whether Meng's arrest was unlawful and whether the U.S. records of the case contain misstatements or omissions.

China has charged two detained Canadians with spying, escalating tensions between the two countries following the arrest in Vancouver 18 months ago of a senior Huawei executive wanted on U.S. charges.

The Chinese embassy in Ottawa denounced Holmes's decision and called once more for Meng's immediate release.

Foreign Affairs Minister Francois-Philippe Champagne responded in turn by calling for the release of the two "arbitrarily detained" Canadian men.

Kovrig is an ex-diplomat who was working for the International Crisis Group and Spavor is an entrepreneur who did business in North Korea.

They have been in Chinese prisons since they were arrested nine days after Meng's arrest.

The conditions under which the two Canadians are being held has been the subject of scrutiny.

Kovrig and Spavor had no access to lawyers or their families as of May, with the exception of a phone call the Chinese embassy said Kovrig was allowed to make to his sick father in mid-March.

At the same time, the embassy said Kovrig and Spavor were being provided with better food to strengthen their immunity against the novel coronavirus.

It said detention centres were closed due to the epidemic, so Kovrig and Spavor were receiving more frequent letters and parcels to ensure their contact with Canadian diplomats in China.

The allegations against Meng, who is Huawei's chief financial officer, date back to 2013.

The U.S. is seeking to extradite Meng on fraud charges based on allegations she lied to HSBC about Huawei's relationship with Skycom, a telecommunications company in Iran, putting the bank at risk of violating American sanctions against that country.

But in a case management memo dated June 12, Meng's lawyers assert their client delivered a presentation to an HSBC banker in Hong Kong that included statements about Huawei's business activities in Iran, but the statements were omitted from U.S. records of the case.

They argue Meng's statements provided the bank with "the material facts it needed to know in order to assess whether there was any risk to HSBC in continuing to provide banking services to Huawei, including processing U.S. dollar transactions related to Huawei's commerce in Iran."

The tensions between Canada and China have spilled over into trade between the two countries including canola exports from Canadian farmers.

Earlier this month, Huawei's ambitions to be a player in Canada's 5G network were very much cast in doubt after two of the country's three largest telecom companies announced partnerships with the Chinese company's European rivals.

Bell Canada announced on June 2 that Sweden-based Ericsson will be its second supplier of the radio access network equipment — a major component in fifth-generation wireless networks — following its choice of Finland's Nokia in February.

Later in the day, Telus Corp., which uses Huawei equipment extensively in its current network, announced that it too had selected Ericsson and Nokia for its 5G network needs.

Huawei is the world’s biggest supplier of network gear used by phone and internet companies.

The announcements come as Ottawa continues its review of Huawei's role in Canada's 5G networks over security concerns due to suspicions about the company's relationship with China's government.

The United States has warned Canada, the United Kingdom and other allies that it will limit intelligence sharing with countries that have Huawei equipment in their 5G networks — citing its potential use for spying by China, an allegation Huawei denies.