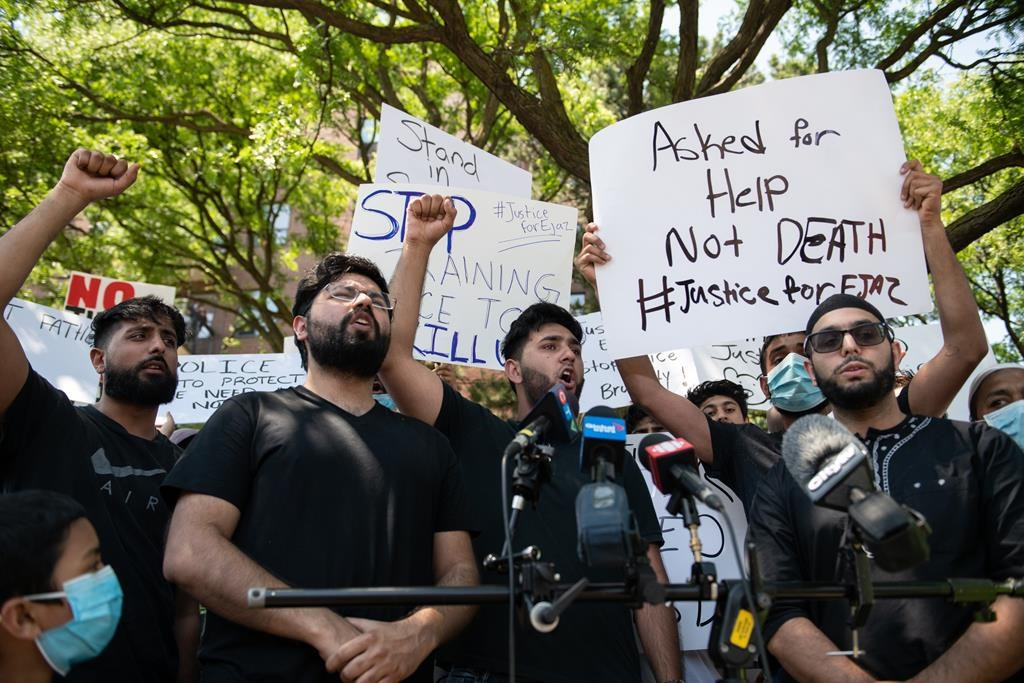 Hundreds of people marched through the streets of Mississauga, Ont., on Monday, June 22, 2020, to protest the police shooting of a 62-year-old man suffering from mental illness. Photo by The Canadian Press/Galit Rodan
Previous story
Next story

Hundreds of people marched through the streets of Mississauga, Ont., on Monday to protest the police shooting of a 62-year-old man suffering from mental illness.

Joined by the man's family, the crowd chanted "no justice, no peace, abolish the police" as they walked along a major thoroughfare with little police presence.

Ejaz Choudry was in the middle of a mental health crisis when the family said they called the non-emergency line for help around 5 p.m. on Saturday. Three hours later, Peel Regional Police officers stormed Choudry's home, fired multiple shots and killed him.

Choudry's family has demanded that the officer who shot him be fired. They have also called for a public inquiry into the man's death, as well as changes in the response to people in crisis.

"We want to create a system that is meant to be there for us," said Choudry's nephew, Hassan Choudhary.

"This system is not meant to be there for us. You're in a mental health crisis and you're faced by people with guns, people with body armour, people with authority over you, people demanding you, telling you what to do, instead of listening and trying to understand what's wrong."

At one point, the emotional crowd surrounded two police officers and screamed at them for change. Other protesters got between the officers and the crowd, which eventually marched on.

The Special Investigations Unit, the province's police watchdog, is probing the death.

Choudry's family had previously expressed its lack of faith in the SIU to conduct a thorough investigation, a position they reiterated on Monday.

"I need justice," said Rafaqat Ali Choudry, the man's younger brother. "Police is to protect us, not kill us. How I trust again?"

The family's calls for a public inquiry were supported by the Opposition New Democrats, but Premier Doug Ford has expressed his confidence in the SIU.

Hundreds of people marched through the streets of Mississauga, Ont., on Monday, June 22, 2020, to protest the police shooting of a 62-year-old man suffering from mental illness.

"My heart and prayers go out to the family that lost a loved one, no matter what happened," Ford said Monday at a news conference.

"This is a terrible situation, unfortunate, but let's see what the report says because I don't believe in pointing fingers at any group, any organization, until we get the details because the details will tell the story."

The man's family has said that responding officers were shouting at Choudry in English, a language he didn't understand.

The family said Choudry had periodically held a kitchen knife on Saturday. They said they pleaded with police to allow them to talk to Choudry. Police had taken everyone outside the home except for Choudry, the family said.

"My uncle was a harmless man, he had no power to hurt anyone, he could barely breathe at times," Choudhary said.

The crowd condemned other fatal encounters between police and people in crisis, including the recent death of a 29-year-old woman in Toronto who fell from her balcony while officers were inside her home. The family of Regis Korchinski-Paquet has questioned the role of police in her death, which is also being investigated by the SIU.

They were also chanting the name of D'Andre Campbell, a 26-year-old man suffering from mental illness who was shot inside his home by Peel police responding to domestic incident call.

The Peel Police Services Board said in a statement Monday that it was saddened by the deaths of Choudry and Campbell, noting it's asking the SIU to expedite the investigation and provide frequent updates.

The statement said the board is working with Chief Nishan Duraiappah and the municipality on a new plan that it says "will ensure mental health calls, public health and safety, and community relations are considered in a more holistic way when it comes to community policing."

"These deaths are a tragic reminder that there is much work to be done," the statement concluded.