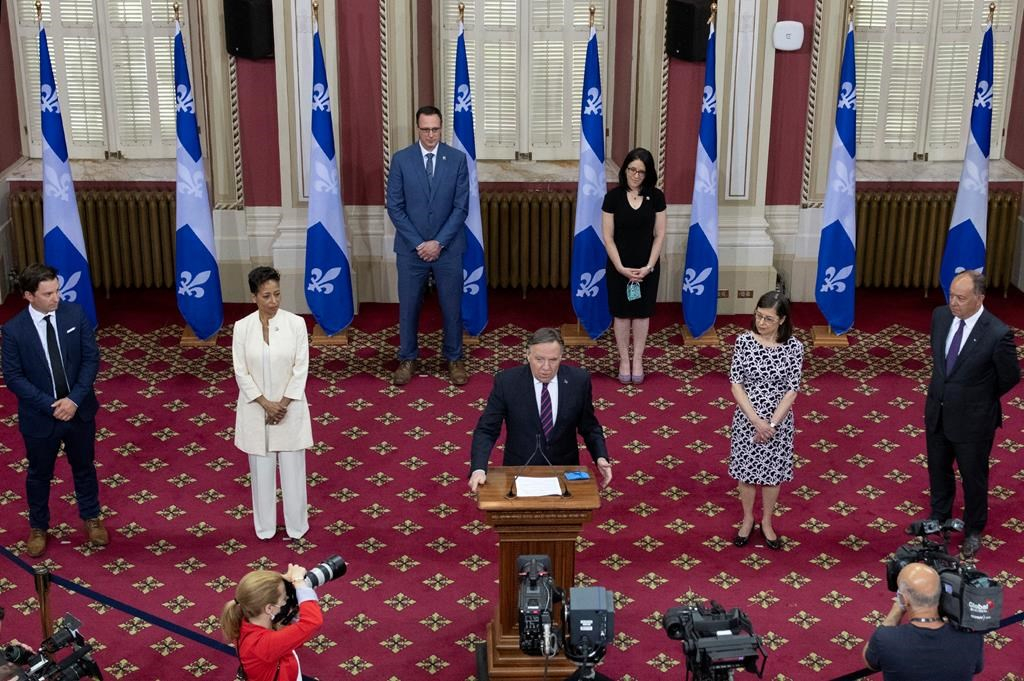 Quebec Premier Francois Legault made major changes to his cabinet Monday, including replacing the province's health minister in the midst of the COVID-19 pandemic.

Danielle McCann, who shepherded the Health Department of the province worst-hit by COVID-19, will take over the higher education portfolio, which had belonged to Education Minister Jean-Francois Roberge.

Questioned whether he was demoting his health minister, Legault said he didn't think education was less important than health. He did, however, say Quebec "had a failure and a victory" during the pandemic.

"We had a failure in the long-term care homes and a victory in the community," referring to the fact that 64 per cent of the province's 5,417 deaths attributed to the novel coronavirus occurred in those facilities for seniors.

Legault said McCann did "extraordinary" work on improving front-line care, such as increasing the responsibilities of pharmacists and nurses. And he also praised her for preparing the province for a possible second wave of infection in the fall.

But what Quebec's health network needs right now, the premier said, is to modernize its "stone age" information system and to hold regional managers accountable. The Gazette reported in May, for example, that health authorities were contacting and tracing COVID-19 infections with a fax machine.

"Christian Dube has a lot of experience in management — not necessarily in the health care system — but in management, and I think it's about time we evaluate the managers in our health care network."

Dube, who comes from the business world, is the first person outside the province's health care network to run the Health Department since Legault was named to the job between 2002-03 as a member of the Parti Quebecois.

"So, I believe that it is possible, when you are a businessman, to change things and then improve things in the health network," he said, referring to his pre-politics job as the co-founder of Air Transat airline.

Quebec Premier Francois Legault made major changes to his cabinet on Monday, June 22, 2020, including replacing the province's health minister in the midst of the COVID-19 pandemic.

Opposition parties said the reshuffling was an attempt to hide the government's pandemic record.

"A reshuffling that only has one goal: to hide the government's negligence in preparing for the pandemic," Liberal leader Dominique Anglade said on social media.

Interim Parti Quebecois leader Pascal Berube noted that Quebec accounted for nearly two-thirds of the country's COVID-19 deaths, despite only making up 23 per cent of the population.

"The change of minister and deputy health minister in the midst of a pandemic indicates that the government recognizes the failure of its preparations for (long-term care homes)," Berube said.

LeBel, a former chief counsel with Quebec's corruption inquiry, known as the Charbonneau Commission, will be responsible for negotiating a massive collective bargaining agreement with the province's 500,000 public sector workers.

But Legault said LeBel's first task will be coming up with a replacement for Bill 61, which sought to fast-track 202 construction projects for things such schools, seniors residences, road work and public transit.

The bill was tabled late and required the consent of the opposition parties to move forward — which it didn't get before the session paused for the summer.

LeBel also brings a woman aboard Legault's all-male economic team, for which he has heard criticism.

Simon Jolin-Barrette, who led the government's major legislative changes on secularism and on reducing immigration, will take over the justice portfolio while remaining house leader.

Legault noted that Jolin-Barrette, who will also remain minister in charge of the French Language, is the youngest justice minister in the province's history.

International Relations Minister Nadine Girault will retain her portfolio while also taking on the immigration file. She was recently appointed as co-chair of a task force on racism.

No backbenchers were promoted as part of the shuffle.

The Coalition Avenir Quebec government holds a majority in the 125-seat legislature with 76 seats.

The Opposition Liberals hold 28 seats, Quebec solidaire follows with 10, the Parti Quebecois has nine seats and there are two Independent members of the legislature.