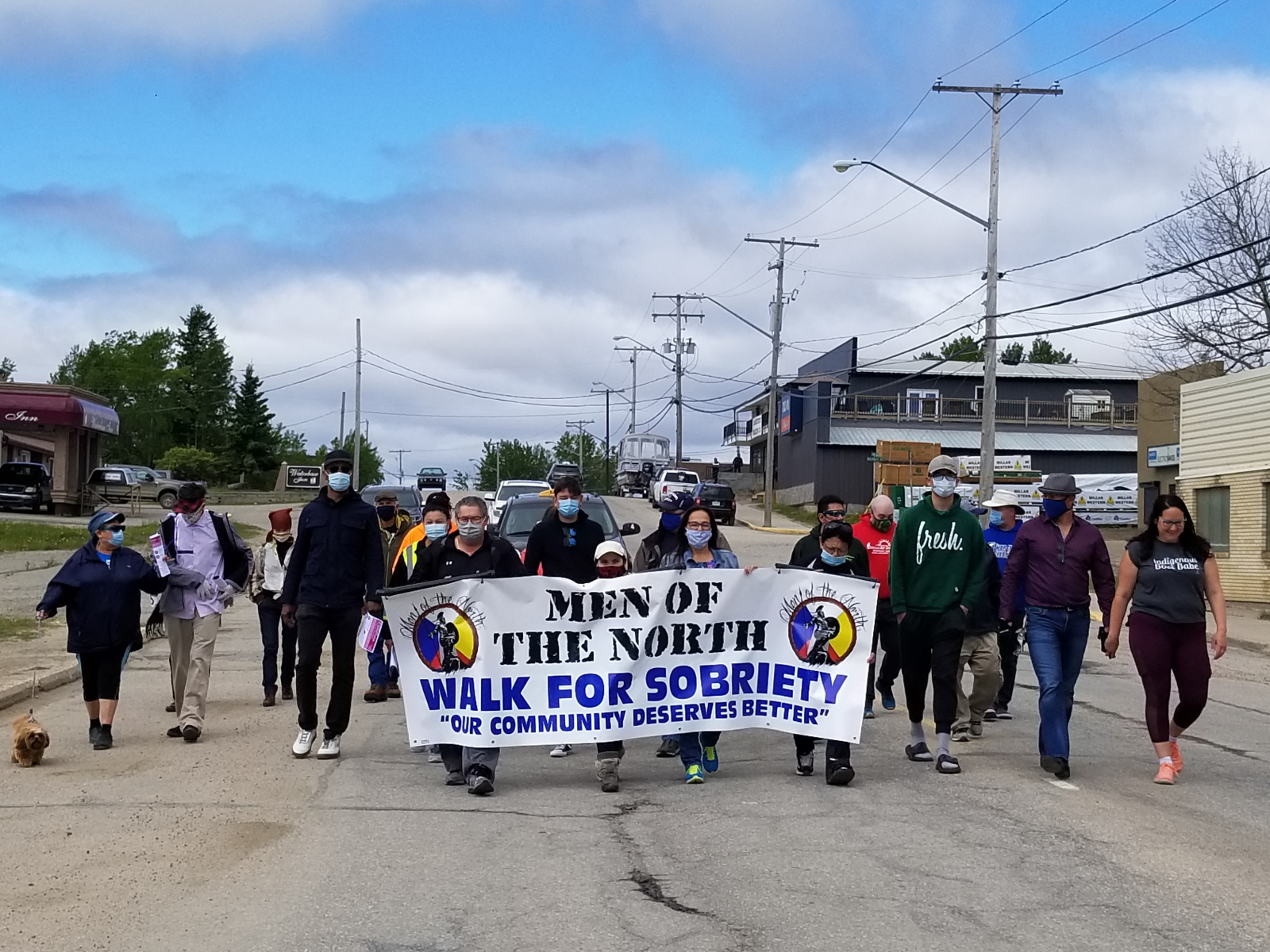 A walk for sobriety in La Ronge, Saskatchewan was organized by the Men of the North group to raise awareness and highlight the personal benefits of sobriety. Photograph by Michael Bramadat-Willcock.
Previous story
Next story

As bars begin to reopen in northern Saskatchewan, a men's support group organized a walk to bring awareness to the community and highlight the personal benefits of sobriety.

A group led by Men of the North walked from the Lac La Ronge Indian Band office to the site of a former residential school on their urban territory La Ronge. Community members are grappling with a recent death in which alcohol was a factor.

“We already had a tremendous accident here in the community... and it took our community by surprise and it’s creating such a deep wound in our community,” Christopher Merasty, Men of the North founder, told a crowd of supporters.

On June 14, a pedestrian was found dead on Queen Street after an apparent hit and run by an allegedly intoxicated driver who later called the RCMP to report the incident.

Merasty told Canada’s National Observer that now is an important time to talk about these issues because people are starting to come out of self-isolation and are looking for ways to connect with each other as bars reopen.

Merasty and his companions want to raise awareness about the toll that addiction is taking on the community and to promote healthy, sober life choices.

“With the liquor stores and the bars opening up it’s creating a lot of concerns here in our community… If we continue this and walk the sober path I’m sure that we can make a big difference here,” Merasty said.

Chief Tammy Cook-Searson also attended the sober walk. Cook-Searson said that not drinking is about making a personal choice.

“The longer you’re sober and the more you start to heal yourself, the easier it gets. I made a choice over 30 years ago to quit drinking and doing drugs and that was one of the best decisions I’ve made in my life,” she said.

“It’s made a huge difference for my family and also for the community and for us to keep being good role models to our community members.”

Cumberland MLA Doyle Vermette attended the walk, too. Recently back in La Ronge from the Saskatchewan legislature where he was pushing for a provincewide suicide prevention bill, but failed after it was voted down.

“I wanted to support the Men of the North to bring awareness about addictions, about making better choices and supporting families and loved ones, that’s what it’s all about and that’s why I’m here today,” Vermette told Canada’s National Observer.

He said that addictions and mental health issues that can lead to suicide go hand in hand.

Former Crown prosecutor Harold Johnson, author of Firewater: How Alcohol is Killing My People (and Yours), spoke at the event.

In his book, Johnson looks at ways to address the “harmful impacts of alcohol consumption” and the “extreme death rate directly connected to the use of alcohol in our northern Saskatchewan communities.”

Johnson has been a proponent of limiting access to alcohol and of being more vocal about the benefits of sobriety. Johnson told the crowd that a big part of leading a happily sober life is understanding that sobriety is more natural than intoxication.

“I want to remind you, being sober is the normal state of a human being. Being sober and clear minded all the time is our normal state. That is our aboriginal awareness,” Johnson said.

“Anybody that tells me that they’re in recovery, I tell them no. You’re not in recovery. You’re normal. You’re just being normal now. You’ve found normality. That’s all sobriety is. Living a normal life.”

He said that being actively sober and proud of it is a good way to lead by example and show people the positive changes that can happen in their lives once they cut out alcohol. He said that can bring a shift in the societal narrative around intoxication.

“Start telling sobriety stories instead of those party stories. If we tell enough good stories about ourselves people will see this and say I want to walk like that. Look at those people walking, they’re sober. They don’t have a hangover. I want my path to look like that,” Johnson said.

“I’ve been sober now for three years and it was my choice. After battling cancer I took another road, a sober road, and it’s beautiful,” Roberts said.

He said that the residential school he went to took away the agency to act for himself that is key to making the choice not to drink.

“We’re always told what to do, when to do it and how to do it, and that is still in the back of our heads. I learned that with the residential school program,” Roberts said.

“We weren’t allowed to look a superior in the eye, we’d get a wack over the head. A lot of (people dealing with addiction) walk down the road like this. You don’t see too many of them with their head up and being proud of who they are.”

Roberts hopes that more residents will make the decision to drink less and by doing so help keep future generations from falling into the same trap.

“Walk straight, walk sober and hold your head up when you’re proud because at the Indian Residential School we left with our heads down.

“Being sober is a beautiful world and you can pass that onto your children and grandchildren. Not seeing you drunk or drinking. Not copying that behaviour.”

The Lac La Ronge Indian Band was among several northern communities, such as La Loche, that asked the province of Saskatchewan to limit alcohol sales during the pandemic, which communities worried would lead to a spike in alcohol abuse as well as bootlegging after hours.

Those requests were initially denied because the province didn’t want to cause a spike in alcohol withdrawal by limiting access. However, a successful program that limited alcohol availability in the community of La Loche has led to renewed calls for such a policy to be enacted elsewhere.

Merasty said that he would like there to be something similar to the La Loche model for La Ronge, starting with a day where no alcohol would be sold to commemorate alcohol related deaths in the community.

Searson said it’s important not to judge people who do drink. “You know everyone needs support, we all have different walks of life, we all have our struggles, and to know that none of us are perfect.”

She said that’s the reason for the new wellness, treatment and recovery centre that is being built in Lac La Ronge.

“A 24-bed, in-patient treatment centre. That’s amazing and without the community’s support that wouldn’t be there,” Cook-Searson said.

“Keep being sober, great role models for your families. You know it’s a choice... Keep that choice up.”

Johnson said that leading by example can save lives.

Roberts hopes that by holding cultural gatherings, land-based healing and promoting land-based teachings, people will be able to regain the sense of self-worth that is needed to beat addiction.

“We may not be able to go back to the way it was before, but we can sure appreciate what our parents had and we can have that, too,” Roberts said.

Merasty said that by drinking responsibly, people can work toward breaking the cycle of alcohol abuse in the next generation.

“We need to strive for better awareness in our community because there has been a lot of destruction over these past few days, over these past couple months,” Merasty said.

Merasty said that Men of the North members are willing to help out if anyone is in a situation where they might drink and drive.

“Call up one of the guys from Men of the North, we’ll come and pick you up and take you home. Leave your keys at home. Please don’t drink and drive.”