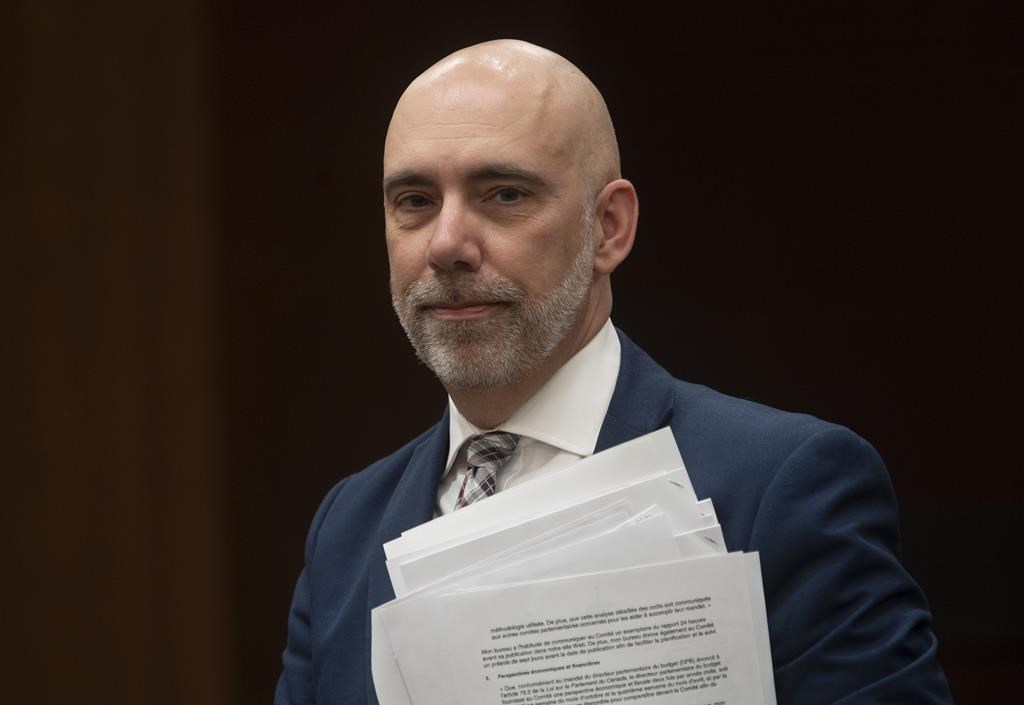 A Liberal pledge to provide eight extra weeks of payments through the cornerstone benefit for people who've lost all or nearly all their work due to the COVID-19 pandemic is likely to cost the government $17.9 billion, the parliamentary budget officer says.

The report from budget officer Yves Giroux released Tuesday said that would bring the net cost of the Canada Emergency Response Benefit to $71.3 billion.

The CERB, now budgeted at $60 billion, has paid out $52.14 billion to over eight million people as of Sunday, as demand surges past original federal expectations.

With the first cohort of CERB applicants set to hit the 16-week limit on the payments early next month, the Liberals have promised to increase it to 24 weeks to provide help through the summer for those who need it.

Giroux's report says the additional cost to the program depends heavily on the outlook for the economy and jobs, as well as the course of the pandemic.

The report says further uncertainty over the final cost of the program rests on the actual takeup of the separate federal wage subsidy program, which the Liberals plan to retool.

A report from a group of experts convened by the C.D. Howe Institute urged the Liberals to take the extra time bought by extending the CERB to rework the program itself and put in a program to help recipients retrain for other or better jobs.

Employment Minister Carla Qualtrough and Tiff Macklem, the governor of the Bank of Canada, issued separate warnings Monday that not everyone will have a job to go back to as restrictions ease and businesses reopen.

It's why the C.D. Howe paper also called for an update to the employment insurance system to handle a possible surge in applicants come September, and for clearer language around a newly imposed requirement on CERB recipients to look or take work when it is "reasonable to do so."

The Liberals' latest estimated cost of the total package of pandemic-related aid was about $153.7 billion, but Giroux's running tally now estimates the cost at $169.2 billion.

Finance Minister Bill Morneau said next month's fiscal snapshot will provide a comprehensive accounting of government spending, and a look at the potential deficit for the year and the debt — figures Giroux estimated at $256 billion and $962 billion, respectively.

The report from budget officer Yves Giroux released on Tuesday, June 23, 2020, said that would bring the net cost of the Canada Emergency Response Benefit to $71.3 billion.

Giroux has also said that his spending estimates don't account for additional stimulus the Liberals may have to use to get the economy going again once the recovery period rolls around.

Morneau didn't say what kind of stimulus measures the Liberals may have to use, particularly if companies reopen and consumers don't return to normal spending levels, leaving a dearth of demand expected by the Bank of Canada.

"We're in an economic challenge that is unlike any we have seen before, so the notion of how we might come out of this challenge is likely to be different than what we've seen before," he said during an appearance before the Senate on spending estimates.

"We so far have put money into the economy, both in terms of supporting people and in supporting businesses — and through them, people — that have to a great extent filled up some of the economic challenges that we've seen," Morneau said.

When the Liberals unveiled the wage subsidy and CERB, it was the subsidy program that carried the heftier price tag of over $70 billion. The government styled it the largest social support program in the country's history.

But fewer companies than envisioned have used the subsidy, which now is budgeted to cost $45 billion. As of Monday, the government had approved $15.77 billion in payroll help to 236,360 companies.

Morneau said the government was getting close to final decisions on changes to the program's eligibility rules to improve takeup after consulting with business and labour groups.

Fuelling demand for the CERB has been a steep drop in employment, with three million job losses in March and April as non-essential businesses were ordered closed to slow the spread of the novel coronavirus.

Although the country recouped in May about one-tenth of what was lost in the previous two months, there is still the possibility that many of the temporary layoffs become permanent.

The Liberals on Monday extended the recall period for furloughed workers due to "a great deal of uncertainty" companies have about when they can bring back employees, Labour Minister Filomena Tassi said in a statement.

Changes coming to allow seasonal workers to apply for CERB