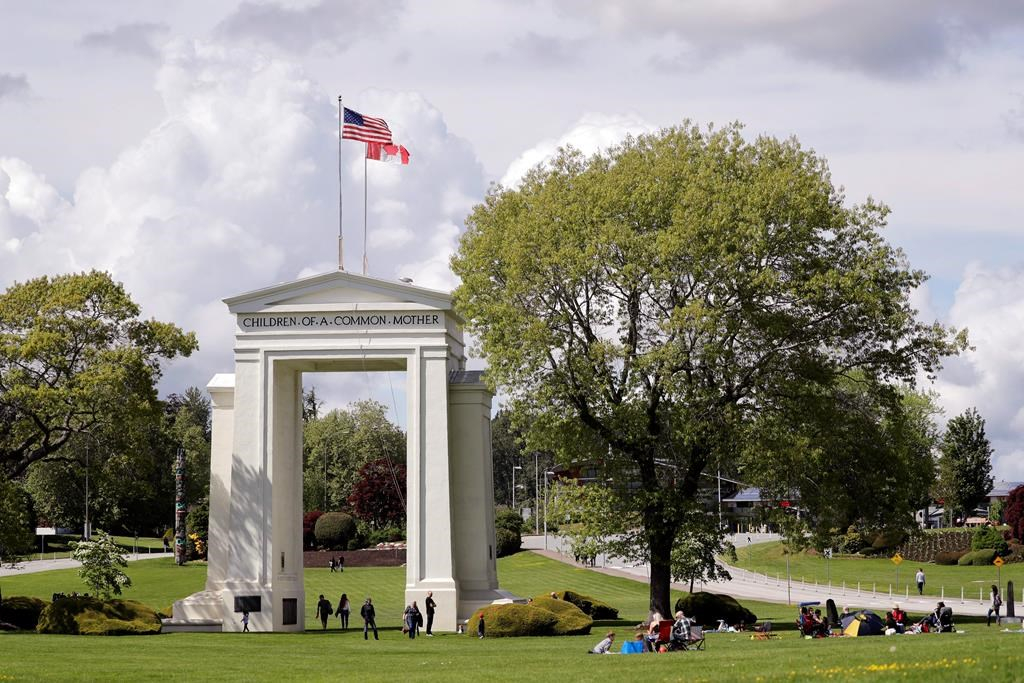 In this photo taken May 17, 2020, people walk back and forth across the border between the U.S. and Canada in Peace Arch Park in Blaine, Washington. File photo by The Associated Press/Elaine Thompson
Previous story
Next story

New restrictions on visas for workers entering the United States don't apply to Canadians who don't plan on living south of the border permanently, says the American Immigration Lawyers Association.

A "practice alert" for the group's 15,000 members, issued late Wednesday, says a liaison committee it has with U.S. Customs and Border Protection has confirmed that exemption.

President Donald Trump this week ordered a suspension on issuing several types of visas allowing foreign citizens to work in the United States, on the grounds that his country's pandemic-rattled economy doesn't have enough jobs for Americans as it is.

The proclamation lasts until the end of the year. It particularly covers workers seeking H-1B visas, which U.S. employers use to temporarily employ specialists in fields such as high-tech.

The ban also includes H-2B visas for seasonal non-agricultural workers, L visas for managers and executives in multinational companies, and J visas for students and workers in exchange programs.

But Canadians who want to work in the U.S. without immigrating permanently don't necessarily need those work visas.

"We therefore believed that the presidential proclamation did not apply to (Canadians). Unfortunately, in the absence of clear guidance on this issue, the position taken by United States Customs and Border Protection varied from port to port," said Chang, who is a partner at Dentons in Toronto who specializes in Canadian and U.S. business immigration.

He said it's now clear that so-called visa-exempt Canadians aren't lumped in with others who won't be eligible to work in the United States.

Trump's proclamation explicitly forbids only the issuing of new visas. People who already hold them can continue to use them.

New restrictions on visas for workers entering the United States don't apply to Canadians who don't plan on living south of the border permanently, says the American Immigration Lawyers Association.

Though Canadians don't necessarily need visas to work in the U.S., having one does come with protections and advantages. Someone with an H-1B visa can seek permanent residency and start on a path to U.S. citizenship, for instance.

By The Canadian Press | News, US News, Politics | June 24th 2020
Coronavirus in Canada