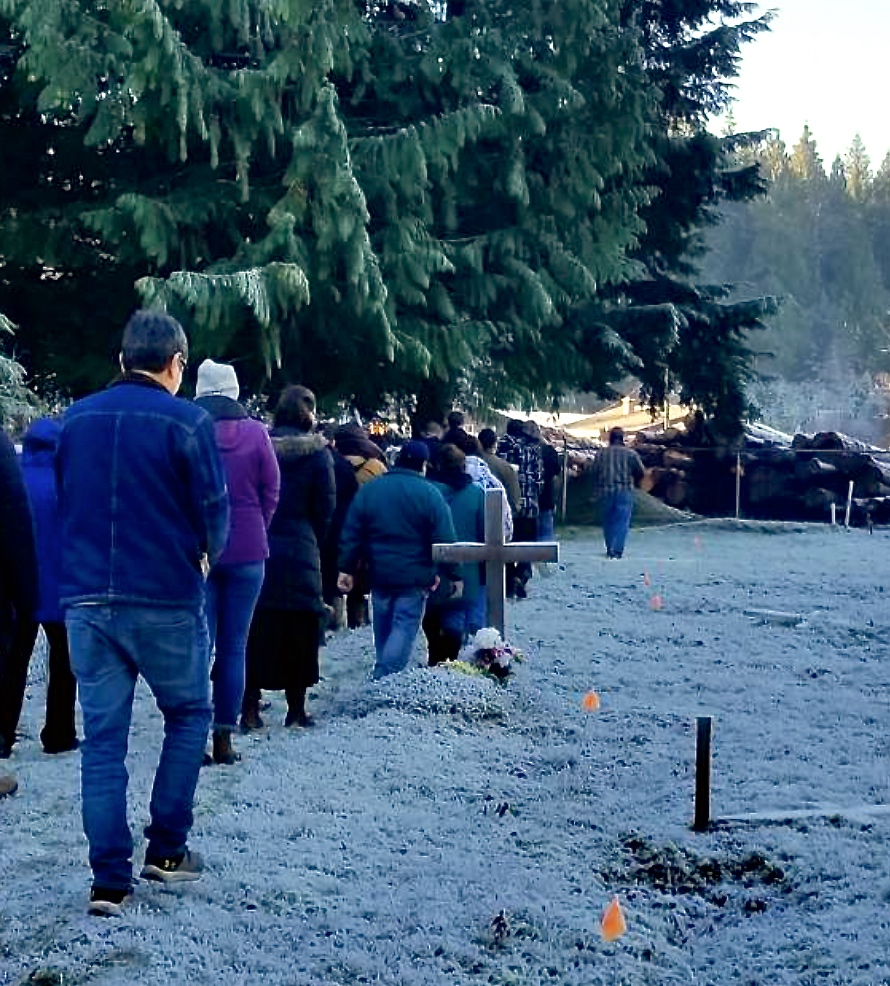 Members of the Klahoose First Nation accompany repatriated ancestral remains for a ceremonial burial in December 2018. Photo courtesy of the Klahoose Nation.
Previous story
Next story

The Klahoose Nation’s traditional winter village lies at the head of Toba Inlet on B.C.’s west coast along the southernmost flank of the Great Bear Rainforest.

Nearby, alongside the Tahumming River, is an old cemetery sparsely covered with wooden or stone markers, mainly active while the Klahoose still lived in the Toba.

But some markers sit at the head of holed out graves, fenced off with care despite being empty.

These are the burial sites where explorers, settlers, scientists or collectors unearthed Klahoose ancestors and funerary art before scattering them across the world without their families’ knowledge or consent.

“There was a lot of heartbreak in watching our people being dug up and taken away to Lord knows where,” says Michelle Robinson, a Klahoose councillor and cultural leader.

Her father and grandmother, who grew up in the inlet where she lived for a stretch of time in the 1970s, would share stories about ancestors being robbed.

“It was horrific for me to see those holes, to understand that somebody had lifted them out of the grave, that we couldn’t fight back or retaliate … that they had rights to our people and could take them away,” said Robinson.

Worse still was the knowledge that the last hands to touch those ancestors and relatives belonged to a stranger.

Robinson was raised with tradition, where only family prepare loved ones for burial.

“To some, human remains from a foreign culture are little more than a curiosity or study piece, but to our people these represent the very soul of our grandmothers," Klahoose Chief Kevin Peacey on the sacred duty to repatriate ancestral remains home.

“So that your last rites, your last days on earth, were that you only be touched by somebody you love,” she said.

“For anybody else to put hands on someone when they pass … it is mortifying.”

In the spring of 2018, the Klahoose launched a 12-month global search for their ancestors with the goal of returning them to their traditional territories.

The focus was ancestors before artifacts, said Robinson.

The nation has facilitated the homecoming of 14 ancestors, including two sets of remains accompanied home by Klahoose members from the Royal BC Museum (RBCM) in Victoria.

For First Nations, repatriation is not some dusty word associated with museum bureaucracy, it is fundamental to reconciliation with Indigenous peoples, says Jodi Simkin, president of the BC Museums Association (BCMA).

It is the return of sacred items of cultural patrimony ­and — more importantly — family members, pillaged from burial sites, to their communities and relatives, she said.

The sale and exchange of First Nations ancestors is not an issue relegated to the past, stressed Simkin, also the former director of cultural affairs and heritage for the Klahoose First Nation.

The trafficking of ancestral remains in Canada that started when the first Europeans began their colonial treasure hunt continues now with antiquities buyers who fuel and sustain a modern market, she said.

“There is still a very active trade in human remains today … with ancestors from across Canada and across North America taken and not returned yet,” said Simkin.

“It means we, the museum community, have a lot of work to do.”

The Association on American Indian Affairs (AAIA) estimated in 2012 that between one million and two million ancestral remains and related artifacts sit in museum collections around the world, Simkin said. And, that doesn’t take into account private collections.

“The goal of Indian (Act) policy was to eradicate the Indigenous population, and there was the belief that if they didn’t step in and remove ancestors and items of cultural patrimony for study, they simply wouldn’t be there anymore,” Simkin said.

Thousands of artifacts were confiscated, acquired or purchased under duress during an era that included residential school programs and cultural bans prohibiting the potlatch and other rich cultural traditions, she added.

The legacy is a tension between the museum sector and Indigenous populations that remains to this day, said Simkin.

Many museums in Canada, such as the Royal BC Museum, are working to embrace reconciliation and are taking proactive steps to reach out to First Nations and help facilitate the repatriation of ancestral remains, Simkin said.

However, a huge stumbling block for many First Nations is the cost of repatriating ancestors or cultural artifacts, she said.

The B.C. government has committed $500,000 to support First Nation peoples or groups that want their ancestral remains and cultural objects returned.

The funding was announced on the weekend, in advance of National Indigenous Peoples Day on Sunday.

“We’re supporting this important work with First Nations because we know that returning ancestral remains and cultural belongings is essential for true and lasting reconciliation,” Tourism, Arts and Culture Minister Lisa Beare said.

The funds will go to the museum association to provide a range of grants supporting communities at different stages of the repatriation process, said Simkin.

“It’s a fantastic step in helping that process along,” she said.

“It also builds on the dozens, hundreds, of Indigenous leaders and their allies who have been engaged in the process of repatriation for generations.”

Dan Smith, chair of the museum association’s Indigenous advisory committee, agreed the funds would help achieve goals of the Truth and Reconciliation Commission and the United Nations Declaration on the Rights of Indigenous Peoples.

“True, meaningful and lasting reconciliation must include the return of Indigenous culture back to Indigenous communities,” said Smith, also a member of the Wei Wai Kum Nation in Campbell River.

Smith pointed to the importance of the Rod Naknakim Declaration adopted by the museum association and First Nations representatives that outlines four pillars of repatriation — one of which being that the costs of the repatriation of artifacts and remains should not be borne by Indigenous peoples.

But Smith said funding is also needed to help with the capital and operation costs to house returned objects.

The repatriation of cultural objects is often contingent on a First Nations having an appropriate public or community facility to house them, Smith said, pointing to the Nuyumbalees and U'mista cultural centres on Quadra Island and in Alert Bay as successful examples.

First Nations cultural centres also allow families to regain ownership over sacred artifacts and decide in collaboration with their communities how best to share their stories, history and care for the objects, said Smith.

Robinson, in charge of social development for the Klahoose, would love funding to develop a centre for the nation’s sacred items. “That’s one of my dreams, to have a place of rest for our own materials,” she said. “And it would be us telling our own story, our own truth.”

But before that, work must continue to get more funding to keep locating Klahoose ancestors, said Robinson.

While working on The Journey Home project with the Klahoose, Simkin used ground-penetrating radar at the Toba cemetery, and at a newer cemetery at the nation’s main village site in Squirrel Cove on Cortes Island, ultimately identifying 344 burial spots.

But she suspects 300 ancestors may still be missing based on conservative estimates derived from historical and Klahoose data.

With support from the Canadian Heritage department, the Klahoose also compiled a list of 500 institutions worldwide likely to have Indigenous ancestral remains and related artifacts, said Simkin, adding the database is now available to any community hoping to do repatriation work.

The Klahoose are also working on a mobile app called the Mountain and the Mouse, along with a number of B.C. museums, to help Indigenous people locate or map items they might want to repatriate, said Robinson.

The app will allow museum visitors to capture information on Indigenous artifacts they encounter anywhere in the world, then relay it back to participating nations, she said.

But for Robinson, the most compelling moment of the repatriation project was when two ancestors were returned home for ceremonial burial in December 2018.

Klahoose members made the daylong journey to the Royal BC Museum in Victoria.

In a small room adjacent to the main gallery, the group carefully transferred their ancestors’ remains into cedar boxes along with cedar boughs and tobacco to the sound of traditional drumming and prayers.

After being sealed, the boxes were transported home to Squirrel Cove for a ceremonial burial and food burning, said Robinson.

“Everybody came out, including our young people, who were walking our ancestors up to the graveyard, and it was such a beautiful thing,” she said.

“It was cold and frosty, but everybody stopped their work, put their tools down and came out to honour their ancestors. It was really just a powerful feeling.”

Another legacy of the project is a booklet describing the Klahoose people, their history and The Journey Home undertaking, to be distributed to institutions and museums worldwide to assist the nation’s ongoing repatriation efforts.

In the forward, Chief Kevin Peacey observed reconciliation offered stakeholders the chance to work collaboratively and a bounty of possibility for all involved, Indigenous and otherwise.

“To some, human remains from a foreign culture are little more than a curiosity or study piece, but to our people, these represent the very soul of our grandmothers, and we have an ongoing obligation to see them returned home,” Peacey said.

“By honouring this sacred responsibility, we fulfil the commitment to our nation, to each other, and to our children who can soar beyond this duty knowing all was done to make things right."