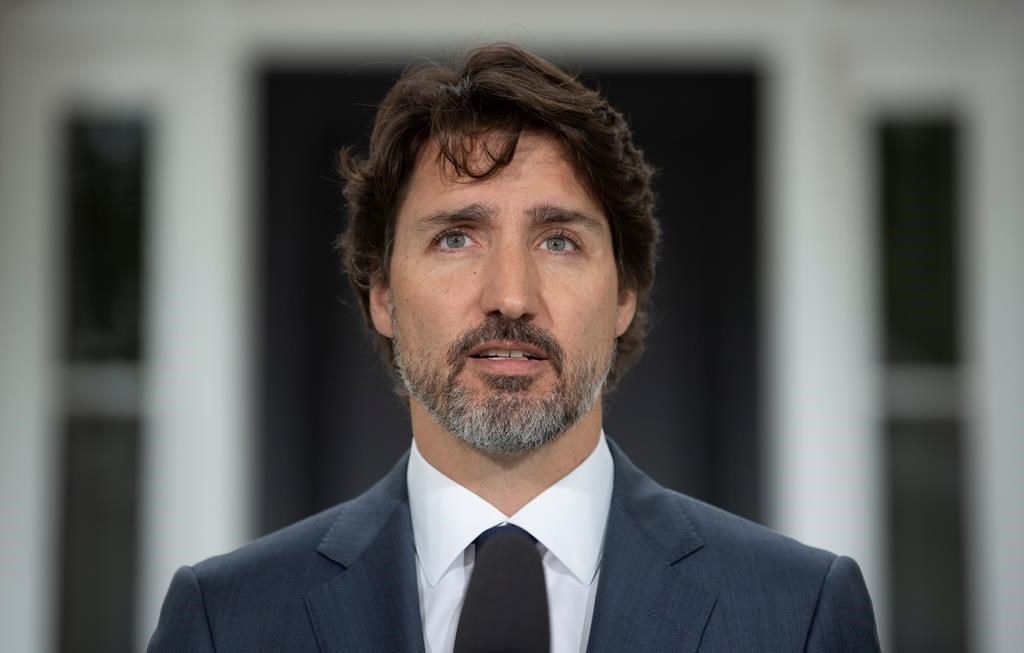 Prime Minister Justin Trudeau looks at the camera as he responds to a question about China during a news conference outside Rideau Cottage in Ottawa, on Thursday, June 25, 2020. Photo by The Canadian Press/Adrian Wyld
Previous story
Next story

Bowing to pressure from Beijing to secure the release of two Canadians would put "an awful lot more" citizens at risk by signalling Canada can be intimidated, Prime Minister Justin Trudeau said Thursday.

Trudeau did not budge from his stance that it would send the wrong message to drop extradition proceedings against Chinese telecommunications executive Meng Wanzhou in the hope of winning freedom for entrepreneur Michael Spavor and former diplomat Michael Kovrig.

Canadian authorities took Meng into custody over American allegations of lying to a bank to violate sanctions on Iran, and her extradition case is now before a British Columbia court.

A letter to Trudeau signed by 19 former politicians and diplomats urges that Meng be freed in a bid to win the release of the detained Canadians.

Signatories to the letter, obtained by The Canadian Press, include Jean Chretien-era ministers Lloyd Axworthy and Andre Ouellet, former Conservative minister and ambassador Lawrence Cannon and former diplomat Robert Fowler, who was himself taken hostage in 2008 in Niger.

On Wednesday, a spokesman for the Chinese foreign ministry suggested releasing Meng could be one way to resolve the issue.

Trudeau said he completely disagrees with the letter-writers because bending to Beijing would imperil the millions of Canadians travelling throughout the world in normal times.

Canada will continue to work "incredibly hard" to gain the release of Spavor and Kovrig, Trudeau said, acknowledging the pain their loved ones are feeling.

"But at the same time our responsibility is to make sure that we're also protecting Canadians into the future," he said.

"And if countries around the world, including China, realize that by arbitrarily arresting random Canadians, they can get what they want out of Canada politically, well that makes an awful lot more Canadians who travel around the world vulnerable to that kind of pressure.

Bowing to pressure from Beijing to secure the release of two Canadians would put "an awful lot more" citizens at risk by signalling Canada can be intimidated, Prime Minister Justin Trudeau said on Thursday, June 25, 2020.

That stance got support Thursday from Alliance Canada Hong Kong, a group that advocates for human rights in China.

"Engaging in hostage diplomacy sets a dangerous precedent that will put a target on all Canadians in China," said a statement sent by Cherie Wong, the group's executive director.

The group said 123 Canadians are currently being detained in China, including 13 detained since Meng's arrest, and called on Canada to take a "strong and principled stance" to drive international condemnation of China's tactics.

"It is undeniable that the Chinese government is holding foreign nationals within China hostage as chips to bargain with democratic governments. There is strength in the unity of democratic societies," the group said.

"It is therefore important for Canada to not be the first state to kneel before the (Chinese Communist Party's) autocracy for it will only be the start of the collapse of global democracy."

Conservative Leader Andrew Scheer also weighed in, saying he doesn't believe that "setting aside the rule of law is an appropriate response to two Canadians being detained illegally."

"I don't believe that would leave Canadians who are around the world in a very secure position if hostile governments and hostile organizations around the world know that a government would entertain that type of a policy," he said Thursday during a news conference in Regina.

But Scheer blamed Trudeau's failure to stand up to China for convincing some prominent Canadians that releasing Meng is the only option to gain the release of the two Michaels.

He suggested Trudeau should have retaliated by withdrawing Canadian financial support for the Asian Infrastructure Bank and imposed more inspections on Chinese goods coming into Canada.

"But Justin Trudeau has done none of that. He has tried precisely nothing to improve Canada's position to give us more leverage and to show the government of China that there are consequences to mistreating Canadians," Scheer said.

"He's been completely played by the government of China and unfortunately his weakness has led us into this position where people are actually publicly advocating for setting aside the rule of law."

Trudeau says bending to Beijing would imperil the millions of Canadians travelling throughout the world in normal times. Seemingly ignored or lost in Trudeau's reasoning is any mention of the devastating impact US sanctions have had on Iran -- especially Trump's May 2018 sanctions after he pulled the US out of the 2015 nuclear accord with Iran:
-- Iran's economy has fallen into a deep recession;
-- Iran's oil exports have plummeted;
-- Iran's currency has hit record lows recently;
-- Living costs have risen dramatically; and
-- U.S. sanctions are seriously destroying Iran’s health infrastructure, leading to immediate deaths and suffering of the Iranian population. (Source: Common Dreams, Nov 7, 2019)

And PM Trudeau should not forget January 3, 2020 -- a date that will live in infamy -- when this American military ally assassinated Iran's top military commander, Gen Qasem Soleimani, by a drone strike.

Bending to Beijing is one thing. Bending to the extradition wishes -- legal or not -- of the world's military bully is quite another. Insert that factor into your rationalization equation, Mr. Trudeau.