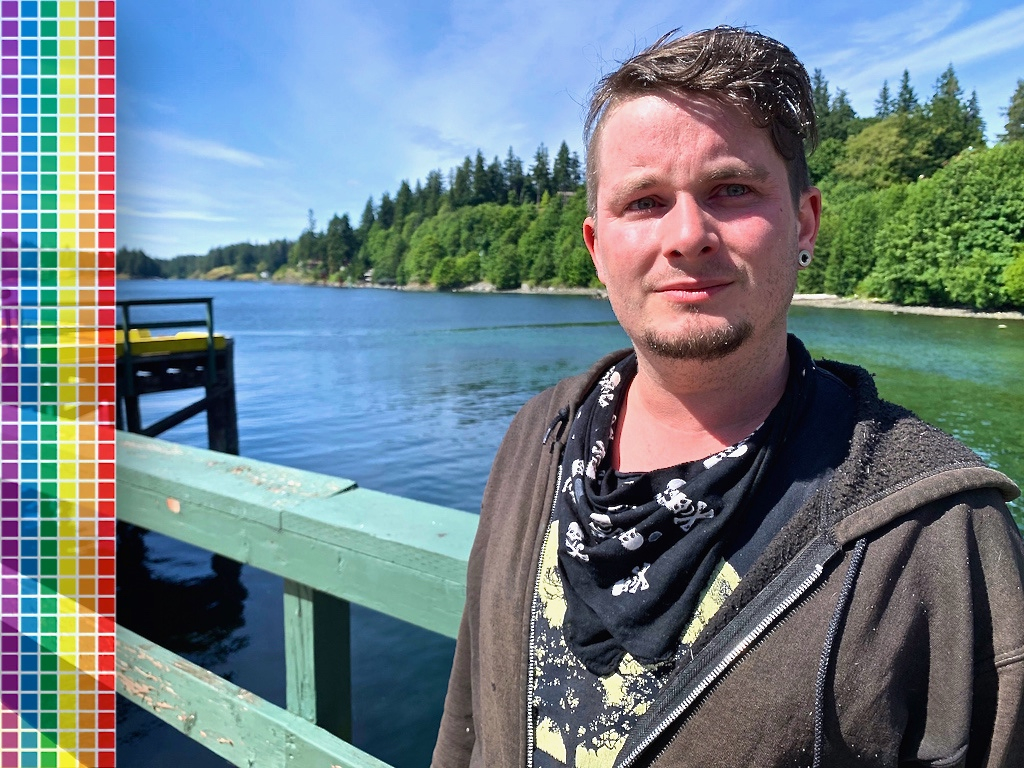 Perhaps nowhere is the global Pride motto of exist, persist, and resist more apropos than the tiny island of Cortes.

Wedged between Vancouver Island and the B.C. mainland, Cortes boasts fewer than 1,000 permanent residents and is two ferry rides away from the nearest semblance of a city.

But geography and demographic challenges aside, not even a global pandemic is quashing the island’s Queer community and allies from celebrating Pride this year.

“It was just too depressing for those of us in the community to have absolutely nothing going on this summer,” said organizer Josh Foisey, who decided to proceed with Pride after cancelling the celebration earlier in the spring.

“Especially for a such a small Queer community out here, I think its nice and important for us to get together and celebrate.”

But, the pandemic has radically changed the nature of the celebration, Foisey said, adding the formerly public event will be invite-only.

“It’s a totally underground event this year … with a hidden location and hidden time,” the 31-year-old said.

“We just have to be really diligent about keeping the numbers down due to (COVID-19), so it’s not likely to be more than 25 people.”

Those invited will be members of the island’s Queer community and allies who attended Cortes Pride fundraising evenings this past year, said Foisey.

It makes for a pretty exclusive event.

“People are hunting around for invites like truffle pigs,” he said with a laugh.

“Especially for a such a small Queer community out here, I think its nice and important for us to get together and celebrate,” organizer Josh Foisey on Cortes Island's LGBTQ2S+ community going ahead with a small COVID-19 appropriate celebration.

The event will be outside to ensure social distancing and only those invited will know the details of the where and when and will get a badge in exchange for their invite when they arrive.

Organizers have even gone so far as to hire security.

“With the lack of things going on this year, people are really excited to get partying again, and we just can’t afford to have any looky-loos or drop-ins.”

It’s bittersweet to have to limit the numbers that can attend Cortes Pride, which is celebrating its second anniversary, said Foisey.

“I would love to have it open to the public like we did last year, but we just can’t.

“And, I think it would have been thriving this year,” he said, adding folks on neighbouring Quadra Island and from the city of Campbell River on Vancouver Island had reached out.

“We had a bunch of people reserving tickets as early as February,” he said.

Launching the inaugural Pride celebration on Cortes last year was a bit tricky given the small size of the LGBTQ2S+ community, Foisey said.

“I doubt we have 40 Queer people who live full-time on Cortes,” he said.

As such, at least half of the 80 or so people who celebrated Pride at the Gorge Harbour community hall last year were allies, Foisey said.

The celebration featured an open-mike family event during the day with pizza, and balloons, followed up by an adult event at night with punk bands and a drag competition.

“Really, it’s just pretty much everything I like, jammed up all together.”

Many other Pride events have moved online, but a virtual option didn’t make sense on an island with very patchy cell service and lots of people who live off the grid, said Foisey, adding he finds virtual events monotonous.

“Anyway, the whole reason you go an event is to connect with your friends and enjoy music in a live atmosphere,” he said.

Ironically, despite the scaled-down event, Foisey said more organizers are helping out after last year’s Pride.

He hopes to break even, but Pride is not a money-maker on a small island, even at the best of times.

Most revenue from the queer community events he regularly organizes goes back to the bands.

“Really, we are all just working for free,” said Foisey.

“Plus, I know times are tough right now, and we’re not going to charge people for what they can’t afford.”

Having fun and building community are the real motivations, he added.

“It’s about caring about where you live, and loving the people you’re around. It’s important to show that.”

By Fae Johnstone | Opinion | May 19th 2020
Coronavirus in Canada