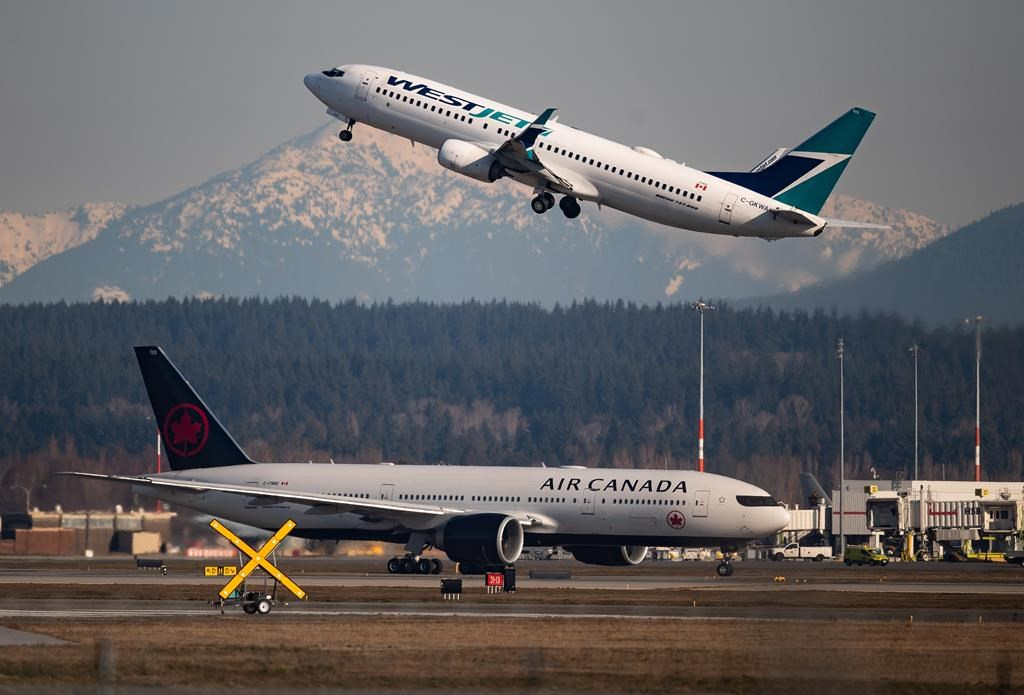 An Air Canada flight departing for Toronto, bottom, taxis to a runway as a Westjet flight bound for Palm Springs takes off at Vancouver International Airport, in Richmond, B.C., on Friday, March 20, 2020. File photo by The Canadian Press/Darryl Dyck
Previous story
Next story

British Columbia Health Minister Adrian Dix says he wants to see the evidence that it's safe for the country's two largest airlines to drop their in-flight distancing policies during the pandemic.

"What I'd like to hear from Transport Canada, from Health Canada is do they agree with this," Dix told a news conference on Monday. "The safety of passengers and the safety of all people in B.C., of Canada, in particular for us in B.C. is very important."

Provincial health officer Dr. Bonnie Henry said spacing policies on airplanes are not within her jurisdiction, but she assumed there was evidence to support the move.

"We are concerned," Henry said. "It's an environment that we know people spend a lot of time in close contact with each other."

She said it is important that people wear masks during flights and continue to practise physical distancing. People should not be travelling if they are ill, Henry said, adding that she would like to see passenger screening for signs of sickness before flights.

The carriers said Friday they will follow health recommendations from the United Nation's aviation agency and the International Air Transport Association trade group.

Transport Canada said in a statement it issued guidance to the aviation industry, including recommendations for passenger spacing, but it is not mandatory.

"As physical distancing may not always be possible, all travellers, except those under the age of two years, and certain individuals with medical conditions, are required to wear a non-medical mask or face covering when travelling by air," said the statement.

British Columbia Health Minister Adrian Dix says he wants to see the evidence that it's safe for the country's two largest airlines to drop their in-flight distancing policies during the pandemic.

Air Canada said it is offering flexible rebooking options to those travelling in its economy class on flights that are close to capacity.

"While we would all like a single measure that reduces risk, we are left to use a combination of approaches to mitigate risk as far as practical," it said in a statement.

The airline says it has taken steps that allow passengers to travel using touchless processes at the airport to obtain bag tags and boarding cards.

"We intend to continue evaluating new processes and technologies as they become available to further enhance safety."

WestJet could not be reached for comment, but it has said its cabin crew can assist customers if there is space to accommodate them.

Dix said he would like to hear from the federal agencies to allay fears or explain why they've allowed Air Canada and WestJet to end the seat-distancing policies to prevent the spread of COVID-19.

The minister said he will discuss the policy change with his provincial counterparts, adding he's looking for more than just a business case from the airlines.

This report by The Canadian Press was first published June 29, 2020.

Companies in this story: (TSX:AC, TSX:WJA)

At least one person has the

At least one person has the gall to challenge the airline industry creating its own rules without any evidence of safety what so ever. IATSA is dominated by US operators, and look at the horror show going on there. We do not need this in Canada. Minister Garneau, where are you ? Hiding? You should be out front on this. And you are not.