Hamilton as he was on Broadway, Mel Gibson back in a hurricane, and a semi-Canadian take on the Patty Hearst story 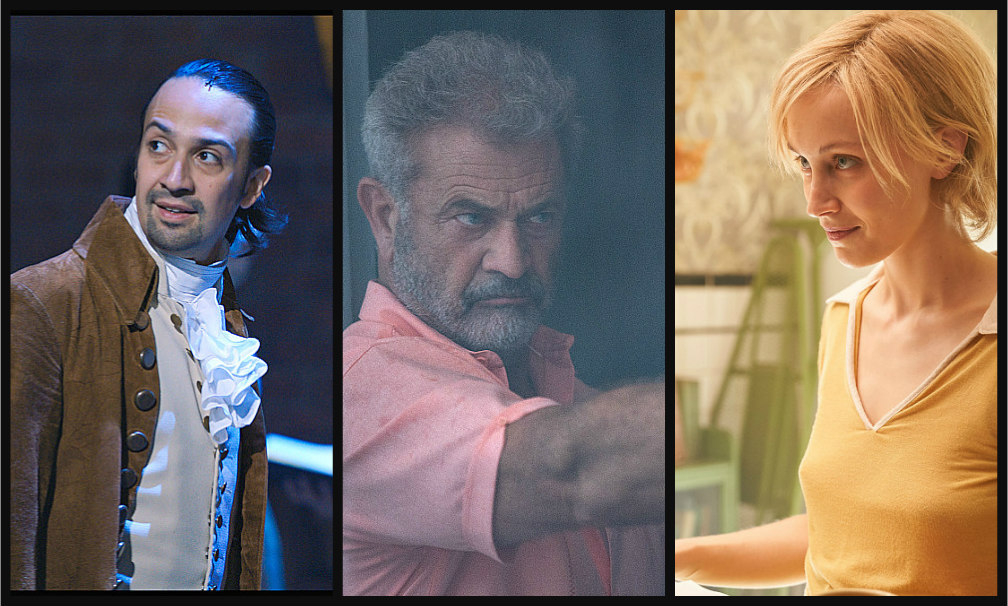 A few movie theatres are back in action. Cineplex has reopened eight, including in Burnaby, Langley, and Victoria. And here in Vancouver, Scotiabank downtown. Cinemark has New Westminster, Surrey and 11 others scattered around the province.

The films they’re showing tend to be ones that were there when the theatres closed back in March due to COVID-19. Who knew there was demand for Bloodshot starring Vin Diesel or Shania Twain in I Still Believe. Most theatres have added older favourites like Jaws, The Goonies, Knives Out and Jumanji. I even saw Grease listed somewhere.

The Rio opened Thursday night and has a well-curated lineup for the next couple of weeks, including Spike Lee’s Do the Right Thing, Jordan Peele’s Get Out, the brilliant Portrait of a Lady on Fire ... and yes, Jaws. What is summer without it?

Since the titles and the virus safety rules differ, it’s best to check the websites: http://riotheatre.ca/, https://www.cineplex.com/Theatres/CineplexLocations, and https://www.landmarkcinemas.com/moviesarebettertogether/

Still streaming your movies? Here are some new titles for you, starting with a giant.

HAMILTON: Three main reasons to see this. One: Curiosity. What is this Broadway sensation that we’ve heard so much about, that won 11 Tony Awards, a Grammy and a Pulitzer and would cost you hundreds of dollars to see in person? (If you could even get a ticket). Here you get the entire show, filmed four years ago with the original cast. Two: How does it translate to streaming this small on your TV set? Three: How good is its telling of history? There are raves out there on all three points, but my reaction is mixed. There’s great energy and imaginative staging that would surely wow you if you were right there in the theatre, and you do hear the audience reacting with wild enthusiasm after each song. But you’ll be watching it at home from your couch.

The artistry comes through, though. Lin-Manuel Miranda has mixed different musical styles (hip-hop to pop, jazz and rhythm and blues) to tell the story of one of the founding fathers of the United States. Alexander Hamilton was a major contributor to its version of federalism, and therefore, the U.S. Constitution, and later the first National Bank, which shaped the whole U.S. financial system. (Unusual stuff for a musical). He was close to George Washington, argued with Thomas Jefferson, and died in a duel with Aaron Burr. There’s hardly any dialogue; the songs alone tell those stories. And rousing they are, although some are so speedy, they’re hard to follow. His various disputes aren’t all that clear, nor is his stand on slavery. He gets off a couple of comments on it, but was likely much more opposed.

The cast is particularly strong. Miranda is OK as Hamilton, and Phillipa Soo is sympathetic as his wife (who he cheated on and who sings a poignant last song). The rest of the cast is a fusion of Black, white and Latino actors, a modern innovation. Renée Elise Goldsberry, as his sister-in-law, is a standout with a couple of powerful R&B songs. The show is vibrant, even on the small screen. There’s almost non-stop dancing, plus a few solos and intimate moments that play like a real movie. That’s because multiple cameras caught the show from several angles, and sharp editing took it beyond a mere archival film. Not perfect, but a good show. (Disney+) 3½ out of 5

FORCE OF NATURE: Mel Gibson is the biggest name here, but he’s almost a supporting player. He’s a cranky old man who won’t leave his apartment building that the police are trying to evacuate during a category five hurricane in Puerto Rico. And while a gang of thugs invade the building looking for something. Two cops (Emile Hirsch and Stephanie Cayo) are the real stars, along with a doctor (Kate Bosworth) and the gang leader cheekily called John the Baptist. Mel gets to rant and complain and do his fair share of shooting when the wind and the action really pick up.

He’s a former cop himself, knows police procedure and some local scuttlebutt better than the rookies who’ve come to help, and he uses his background to resist them. The plot is ridiculous, especially when we find out what the thugs are after. The real draw is the action, lots of it, with plenty of gunplay and yelling. Once it starts, it rarely stops, like a movie from Thailand, although what it’s really trying to be is another Die Hard. It doesn’t make it. A few brief pauses give the characters time to tell their stories, and if they made more sense, the film might work. As it is, excitement whipped up by director Michael Polish inside a furious windstorm is what you get, and better be content with. (Digital and on demand) 2 out of 5

AMERICAN WOMAN: It’s an American story, but a Canadian film in almost every respect. The director, the financing, the locations, and many of the actors are Canadian. The novel is by Yale University creative writing teacher Susan Choi, who reimagines the Patty Hearst story. Here called Pauline, she is said to be from a super-rich family, was kidnapped by a violent revolutionary group during the Vietnam War and adopted their cause enough to wield a machine gun during a robbery. She and two others, who missed being killed in an FBI massacre, are hiding out in upstate New York and another radical is sent to tend to their needs so that they have time to write a book.

Sarah Gadon is the heiress; John Gallagher Jr. is the still-firebrand, but abusive, guy among them; and Hong Chau is Jenny, who comes to help and in the film tells the story to an FBI agent played by Vancouver local David Cubitt. Ellen Burstyn also appears in a supporting role. The film is almost entirely made up of discussions and debates about the morality of, and the need for, protest against a bad war and any injustice. “Sometimes, the only way things change is if you force change,” one says. He also urges a Black grocery clerk to fight for his people. More interesting is the film’s view of the heiress. It subtly shifts to suggest she’s still a prisoner of her class. The film is well directed by Toronto native Semi Chellas, who has worked in a lot of American TV, including producing the series Mad Men. But you’d better favour theoretical musings over action to enjoy it. (Available to buy or rent, EST or VOD) 3 out of 5

MY DARLING VIVIAN: If you saw the Ken Burns country music series, you might remember Rosanne Cash talk about her dad Johnny’s hit song I Walk the Line, how it was a promise to stay true to his wife Vivian, but “It didn’t work out that way.” Here’s the entire story as Rosanne and her sisters Kathy, Cindy and Tara remember it. It’s both enlightening and highly emotional, but also satisfying because Vivian’s story is finally told. June Carter, who Cash left her for, and got such an appealing representation in the movie about them, isn’t so nice in these memories. Vivian, who came off as a shrew is decent here, and wronged.

She and Cash were married and wrote hundreds of letters while he was off in the air force. The film draws on them for the title and to underline the love between them. That faded when he became a star, moved the family to California and was off touring for long periods. The girls were feeling abandoned and Vivian filed for divorce, hoping that would bring him back. Instead, it went through, Johnny married June, and Vivian was excommunicated for a time by the Catholic Church. The girls tell these stories easily, like a writer of country songs, but clearly with tough emotional hurts. And yet, in their telling, both Johnny and Vivian get scenes of redemption later on. It’s a very good film with a strong storyline, deep feeling and lots of home movies and pictures to illustrate them. (Streaming by viff.org in Vancouver and the Hot Docs Ted Rogers Cinema in Toronto) 4 out of 5

MONEY MACHINE: Remember the mass shooting in Las Vegas three years ago? When 58 people died and 413 were injured? In just a 10-minute barrage from a room in an MGM hotel on a country music festival below? Not surprising if you don’t remember it or only do vaguely. It was the biggest assault like it by a single person in American history, but has slipped out of the discussion on gun violence. This film brings it back, explains the public relations effort that made it slip away, and unearths the reasons why it happened in the first place. It uses startling cellphone video, the recollections of people who were there, interviews with people who knew the shooter (including his brother), and uncomplimentary press conference video of the investigating sheriff. But it’s the hotel, its casino and the Vegas gambling industry that gets the most blame.

The MO is fully explained. Gamblers are “pampered” with cheap rooms and drinks and urged to keep playing what they win until inevitably they lose it. Stephen Paddock was a regular. That night, he won and then lost big, flipped out and wanted revenge. He had brought his guns up a service elevator where there was no security check. Later, it was revealed the security cameras weren’t working, either. The sheriff decided within minutes there was only one shooter, interviewed only some witnesses and issued a final report of only three pages. The film cites real police failures during the incident that were covered up. The city wanted the case to be closed, and the hotel, with the same goal, went so far as suing the victims, including a six-year-old girl, to forestall multiple lawsuits. There’s much more in this powerful documentary by Ramsey Denison, who was born in Bellingham and made a previous film about Las Vegas and its lust for money. It was better when the mobsters were still in charge, one person says. “The corruption came when the mob left.” (Steaming from virtual cinemas, none in Vancouver yet, but check here http://www.theatricalathome.com for others, including two in Canada) 3½ out of 5