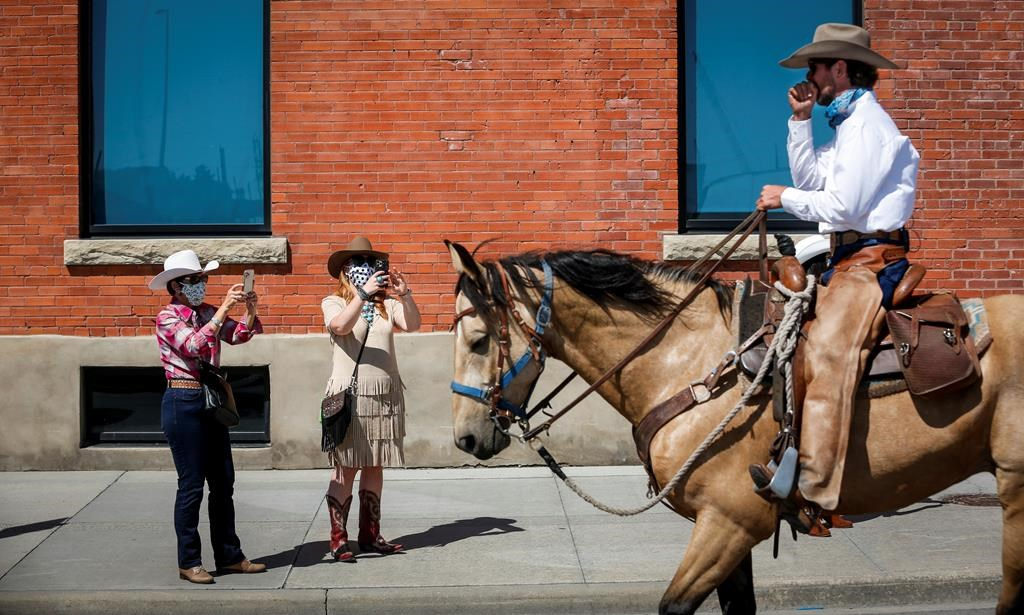 Filipe Masetti Leite a Brazilian cowboy who has been riding from Alaska to Calgary and who has also been chosen as the parade marshal for the Calgary Stampede, rides his horse Mack as they arrive in Calgary on July 3, 2020. Photo by The Canadian Press/Jef
Previous story

Brazilian long rider Filipe Masetti Leite got off his horse, knelt down and said a prayer with tears rolling down his face when he arrived in the Calgary Stampede grounds after a 13-month ride from Anchorage, Alaska.

The 33-year-old completed a 3,400-kilometre journey on horseback from Alaska to Calgary on Friday, the same day the Calgary Stampede was supposed to begin.

Although the annual event and parade to kick it off were cancelled due to the COVID-19 pandemic, Masetti Leite was crowned this year's parade marshal.

The usual parade pomp was replaced with a small group of supporters that included girlfriend Clara Davel, Stampede president Dana Peers and two uniformed police officers as Masetti Leite plodded through the city toward the Stampede grounds.

He later received a white hat from Calgary's mayor — the equivalent of a key to the city.

Masetti Leite thanked many people who made his journeys possible and lauded the encouragement he received from those at the Calgary Stampede.

"What this rodeo means, not only to Canada but to the world, thank you boys and girls," he said as he stood on the stage at the rodeo grandstand.

"I'm a cowboy and the older I get I fear our world ending and I value it so much because the greatest lessons in my life were taught from a man who wears a cowboy hat and spurs and I would not have finished this journey if I weren't a cowboy."

When he arrived in Calgary, Masetti Leite was given an award for being the parade's fan favourite, along with a marshal badge, which he proudly tacked to his shirt.

"What kind of perks can I get in Calgary with this?"

Brazilian long rider Filipe Masetti Leite got off his horse, knelt down and said a prayer with tears rolling down his face when he arrived in the Calgary Stampede grounds after a 13-month ride from Anchorage, Alaska.

Masetti Leite moved with his family from Brazil to Calgary when he was nine and later grew up in Toronto.

He said he was inspired to become a long rider by Aime Tschiffely, a Swiss school teacher who rode 16,000 kilometres alone from Buenos Aires to New York City in 1925 and wrote about his experiences.

Masetti Leite covered about 16,000 kilometres riding from Calgary to his parents' home of Espirito Santo do Pinhal, Sao Paulo, between 2012 and 2014. In 2016, he rode 7,350 kilometres from Brazil to Patagonia.

He documented his travels and wrote the book "Long Ride Home: Guts and Guns and Grizzlies, 800 Days Through the Americas in a Saddle.''

His journey from Alaska to Calgary had its challenges, he said, but he focused on the destination.

"In those tough moments, when those grizzlies are following us, when we're crossing the mountains in the middle of three feet of snow and the cold and the wind and the mosquitoes trying to pick me up and carry me away, I was here. My mind was here. My heart was here," he said.

Peers said he's been fascinated with Masetti Leite's journey, because it epitomizes the cowboy way of life.

"I thought, you know, he'll make a terrific parade marshal," he said. "Considering everything that's gone on in the past four months, I feel very fortunate that we're able to enjoy the day, able to welcome him to Calgary.

"We had incredible plans and unfortunately those weren't possible, but you learn to adapt and find a way to make it work."

Masetti Leite said he intends to spend the next couple of days sleeping and taking about a dozen showers.

He also plans to retire from long riding so he can focus on new challenges.

He intends to write another book about his travels and work on a movie about his Calgary-Brazil trip. He wants to be "the next Anthony Bourdain with a cowboy hat" and tell stories from countries around the world.

This report by The Canadian Press was first published July 3, 2020

And what has happened to the

And what has happened to the horses he rode on these epic journeys? It was the horses which plodded all those kilometers, not the rider - by definition.

I trust that they have all been honourably retired to green pastures and well deserved care for the remainder of their lives. NOT consigned to the nearest slaughterhouse.