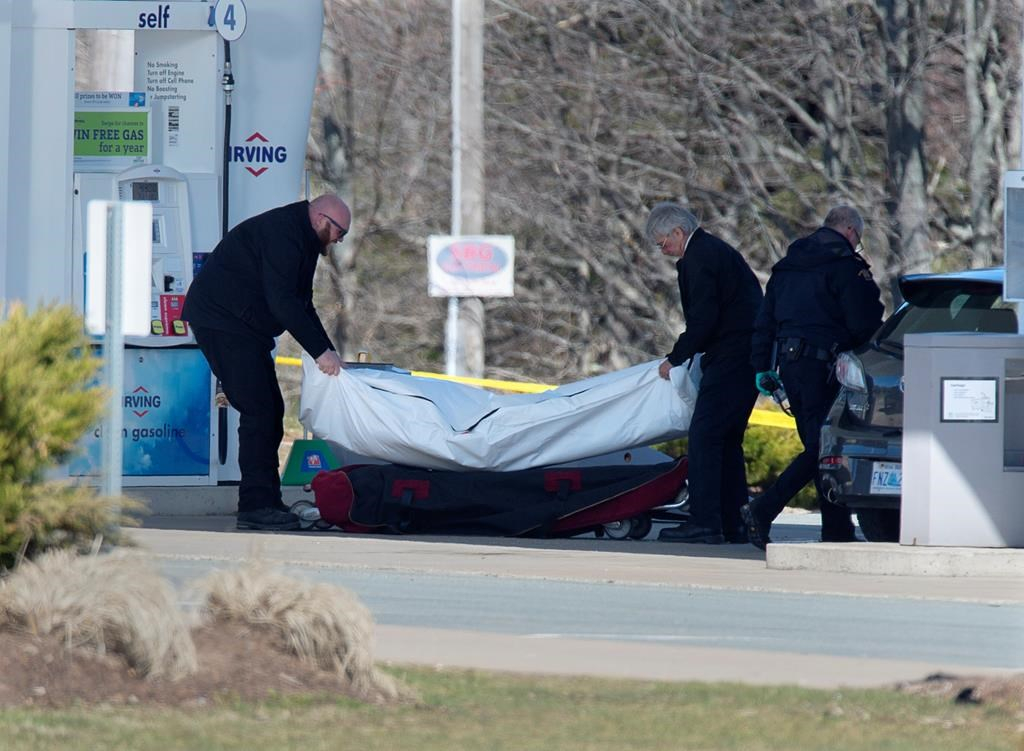 Workers with the medical examiner's office remove a body from a gas bar in Enfield, N.S. on Sunday, April 19, 2020. File photo by The Canadian Press/Andrew Vaughan
Previous story
Next story

A coalition of groups devoted to eliminating gender-based violence across Canada is urging Ottawa and Nova Scotia to refrain from using a restorative justice approach for a promised inquiry into the mass killing that claimed 22 lives in the Maritime province.

In a letter addressed to the prime minister, Nova Scotia's premier and several cabinet ministers, the group insists such an approach would undermine the need for an independent, fully transparent public inquiry.

"We were shocked to see media reports that the launch of an inquiry into the April 2020 massacre in Nova Scotia was being held up by an attempt to graft a 'restorative approach' onto the traditional federal-provincial public inquiry," says the letter, signed by more than two dozen groups and obtained by The Canadian Press.

Restorative justice is a process that focuses on addressing the harm caused by crime by offering those involved — victims, offenders and public officials — the opportunity to meet and discuss healing and reparation outside the regular criminal justice system.

The letter says the group, which includes Women's Shelters Canada and the National Association of Women and the Law, is opposed to using the restorative justice process in this case because hearings are typically held in private and there is no mechanism to compel witnesses to testify.

"The public outcry for an inquiry was not a demand to have discrete groups of affected individuals participate in a series of private meetings," the letter says.

"The families and individuals who lost loved ones as a result of this massacre, the women and children who are subjected to misogynistic violence every day in Canada, and the Canadian public traumatized by ...(the) mass killing are entitled to the full and public justice of an inquiry that ensures public accessibility ... public accountability and transparency."

Public hearings are central to the concept of a public inquiry, said Deepa Mattoo, executive director of the Barbra Schlifer Commemorative Clinic in Toronto, a specialized counselling and legal clinic for women experiencing violence.

"Unfortunately, a restorative approach without a proper ... transparent approach would mean lack of accountability from the system," Mattoo said in an email.

"I think any process that can delay a thorough, transparent public inquiry should be put on hold and not considered at this point. Canadians deserve a clear process for accountability at this stage."

On another front, the letter points out that Nova Scotia has imposed a moratorium on the use of the restorative justice model to deal with offences involving domestic or sexual violence.

"We question whether the use of a restorative approach in this instance is a breach of this moratorium," the letter says.

Last week, Nova Scotia Justice Minister Mark Furey said the provincial and federal governments were ironing out details of how the inquiry would work, but he said there were delays because of "technicalities and legalities."

Furey has said the inquiry or review must have certain features common to public inquiries, including judicial leadership, the power to compel witnesses to testify and the ability to make recommendations to hold public agencies accountable for their actions. And he has said the investigation could take the form of a traditional federal-provincial public inquiry led by an independent commissioner.

However, Furey indicated last week that some sort of hybrid was in the works.

"We want to take a different approach to sourcing the questions that individuals would have, particularly the family members," he said on July 2. "We're taking a human-centred and trauma-informed approach consistent with some of the principles of restorative methodologies."

Furey said he wants people to come forward to tell what they know about the circumstances before, during and after Gabriel Wortman's murderous, 13-hour rampage through northern and central Nova Scotia on April 18-19.

In recent weeks, several groups and individuals have come forward to call for a public inquiry that includes a feminist lens, partly because the carnage the gunman unleashed started with a violent assault on his longtime common law partner.

In 2015, Nova Scotia created an innovative "restorative inquiry" when it appointed a committee to look into allegations of long-term abuse at a former orphanage in the Halifax area, known as the Nova Scotia Home for Colored Children.

But the hearings involving former residents were held in private. And instead of providing a list or recommendations, the inquiry's final report offered a less specific "road map" for change.

Over the past two months, the provincial and federal governments have faced a growing number of calls for a traditional, public commission of inquiry.

Among those demanding this approach are relatives of victims, about 30 professors at Dalhousie University in Halifax and opposition politicians.

As well, the daughter of Heather O'Brien — a nurse who was killed by the gunman on April 19 — has urged the federal and Nova Scotia governments to work together. In early June, Darcy Dobson said "the back and forth about who's responsible for an inquiry is unreal."

Last week, five Nova Scotia senators renewed a call for the province to join with Ottawa to launch a joint inquiry. They said delays in announcing an inquiry have led to increased speculation about the shootings and the assailant, which could be eroding public trust in law enforcement.

This report by The Canadian Press was first published June 8, 2020.