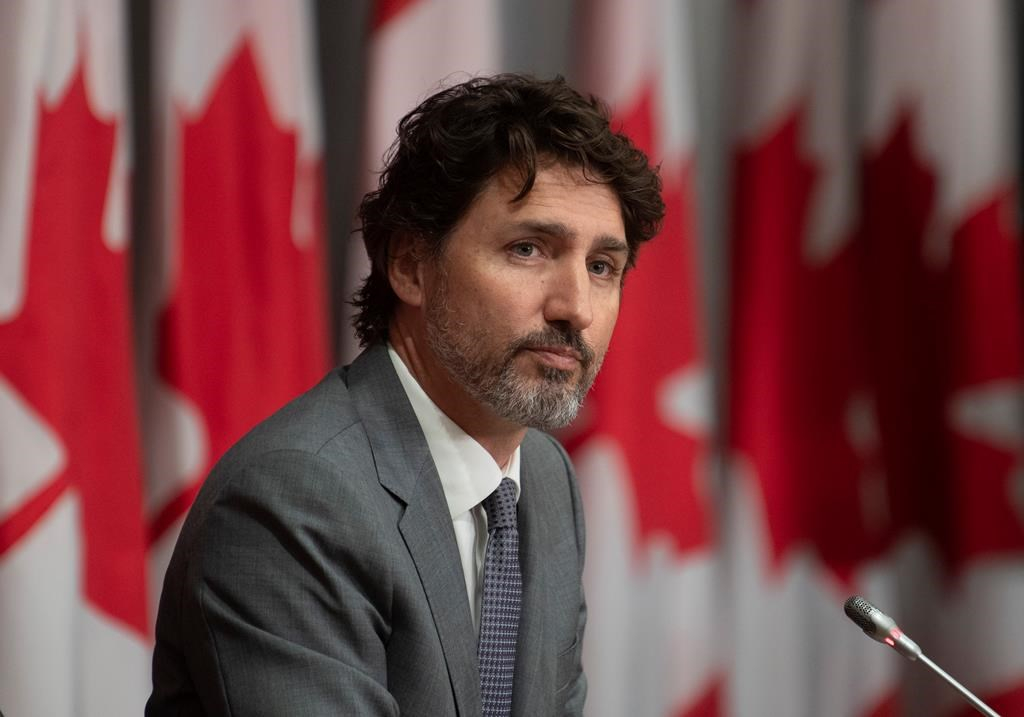 Prime Minister Justin Trudeau listens to a question during a news conference, on Wednesday, July 8, 2020 in Ottawa. File photo by The Canadian Press/Adrian Wyld
Previous story
Next story

The WE organization has paid hundreds of thousands of dollars in speaking fees to members of Prime Minister Justin Trudeau's family, it acknowledged Thursday, as organizations that need volunteers awaited word of the future of a $900-million program WE was to run.

The government says it is working on what to do with the Canada Student Services Grant after its agreement with WE was cancelled amid controversy over the Trudeau family's connections to the Toronto-based charity and its for-profit arm, ME to WE Social Enterprise.

The WE organization said Thursday that it had paid Trudeau's mother Margaret about $250,000 for 28 speaking appearances at WE-related events between 2016 and 2020.

His brother Alexandre has been paid $32,000 for eight events, according to WE. The organization that represents them as speakers was paid additional commissions, WE said.

And Trudeau's wife Sophie Gregoire Trudeau received $1,400 in 2012 for a single appearance that year.

Most of the payments went from the for-profit component of the organization, which sponsors the charitable component, WE Charity said in a statement, though about $64,000 went from WE Charity to Margaret Trudeau's speaker's bureau because of "an error in billing / payment."

"Justin Trudeau has never been paid by WE Charity or ME to WE Social Enterprise for any speeches or any other matters," WE Charity said.

Trudeau is now under investigation by the ethics commissioner over allegations of a potential conflict of interest when the government awarded the sole-source contract to WE. Trudeau has acknowledged he did not recuse himself when cabinet approved the deal.

Trudeau has maintained the non-partisan public service recommended WE to administer the deal, while his spokesman Alex Wellstead on Thursday said "the prime minister's relatives engage with a variety of organizations and support many personal causes on their own accord."

"What is important to remember here is that this is about a charity supporting students. The Canada Student Service Grant program is about giving young people opportunities to contribute to their communities, not about benefits to anyone else."

"Justin Trudeau has never been paid by WE Charity or ME to WE Social Enterprise for any speeches or any other matters," WE Charity said.

WE's sudden departure from the volunteering program has created confusion as the days tick past for young people to put in hours for which the government promises to pay them up to $5,000 toward schooling.

Several non-profits say they and their volunteers are anxiously waiting for answers from the government, including whether the program is going to go ahead and the students they have already taken on will be compensated for their work.

"I have three or four students talk to me and they're anxious, and I get why they're anxious," said Emily Fern, mission co-ordinator for the Saint Andrew's Community Outreach and Support Program in Whitby, Ont. "And I've had a mom call me and she's anxious.

"I've got a few people who are volunteering in good faith right now and we are keeping track of their hours. And some of the families that use our program have been asking (to volunteer) and I can't tell them anything right now."

The grant program promises to pay students up to $5,000 for their post-secondary educations if they volunteer the maximum 500 hours. WE said last week that around 35,000 applications had been received for the program.

The Saint Andrew's program provides food assistance to local families in need, among other things. Fern said demand has increased by more than 25 per cent since the pandemic started in March even as the number of volunteers available has dramatically declined.

It was for that reason that Fern asked for and was given approval to take on five student volunteers through the Canada Student Service Grant while WE was administering the program. But since WE left last week and the government took over, "it's kind of been radio silence."

"It's not like I have a ton of time to deal with this," she said. Most of us are all volunteers too. And it's also such a stressful time that if I didn't need the help I wouldn't have asked for it. And I definitely didn't need more work."

Michelle Porter, CEO of the Souls Harbour Rescue Mission in Halifax, said she has also heard nothing from Ottawa since it took over the program from WE, which both she and Fern praised for their level of support.

"They were giving us frontline care," Porter said of WE. "'What do you need? What do you need them for?' So we thought this is great because we were getting great treatment. And then they kind of got pulled away and we haven't heard anything since."

Porter doesn't know whether the five students she has now will be compensated as promised and she is reluctant to advertise the other 10 unfilled positions, which her organization needs to run the 17,000-square-foot thrift store that funds many of its other charitable operations.

"Students want to come here and I would like to see even more students if we could get them," Porter said. "That's the biggest thing, having to just put it on a hold because we don't know if there are going to be any changes or if they are going to pull it away."

Youth Minister Bardish Chagger’s spokeswoman Danielle Keenan appeared to stand by the Canada Student Services Grant program this week even as she said government officials were "working right now to determine the next steps" and acknowledged the likelihood of a delay.

The program itself has criticized since the details were rolled out at the end of June, with some questioning the blurry lines between volunteer and paid work. Others have blasted the government for compensating students $10 per hour worked, which is less than minimum wage.

Canadian Federation of Students deputy chairperson Nicole Brayiannis echoed those criticisms Thursday as she urged Ottawa to pull the plug on any further positions and invest instead in more direct aid to students, noting the summer is already well underway.

She also suggested keeping existing placements, but increasing their pay to at least minimum wage.

"Students do want to be able to contribute to their communities and they do want to build their resumes and gain that experience," she said.

"However, the volunteer program just doesn't seem to make sense in the way that it was laid out. It would make much more sense just to ensure that if compensation is received for work that is being done, it should be at the minimum-wage level."

Why does WE exist? What are

Why does WE exist? What are it's charitable works, that justify our tax subsidy? Why, for that matter, would a charitable organization be better equipped to manage a government program than the government agencies we already have in place to do that?

I second that. I read the

I second that. I read the article through and never got a clue about the nature of WE. Is it any more than a shell?

Tired of this tempest in a

Tired of this tempest in a teapot already. If PM Trudeau or his wife collected fees paid by We there would be a story. Sophie received a single fee from the speakers bureau back in 2012! We need journalists to report fearlessly to protect democracy especially since the vast majority of Canadian news outlets are controlled by one party, the Conservatives. However, news should be reported fairly not twisted to into a headline that is more impactful. What the PM’s mother and brother earned from the speakers bureau Is of secondary importance. I am guessing many families of politicians, former politicians, retired leaders etc. utilize speakers’ bureaux for earning.

They wanted to buy a forest to save it from loggers. The world chipped in.

Tories ask watchdog to review contracts between Ottawa, WE Charity