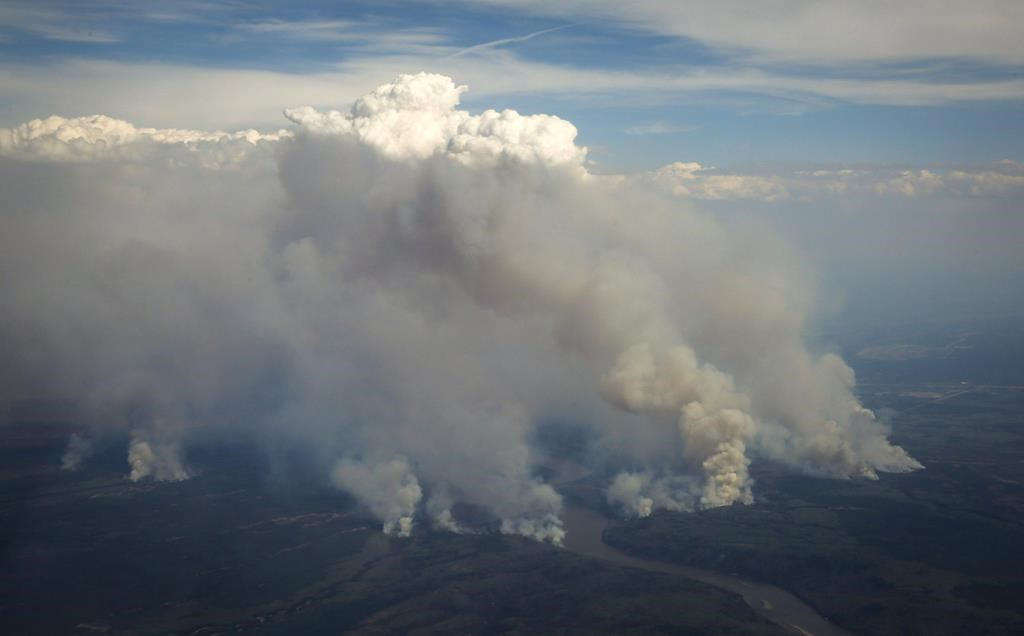 Wildfires continue burning in and around Fort McMurray, Alta., on May 4, 2016. Four years after its flames guttered out, the Fort McMurray wildfire is still affecting the massive river system that flowed through it. File photo by The Canadian Press
Previous story

Four years after its flames guttered out, the record-breaking Fort McMurray wildfire continues to astound — this time with its lasting impact on an extensive river system.

"It's actually stunning that we were able to observe an effect at that large scale," said Uldis Silins, a University of Alberta professor and co-author of a recently published study on how the 2016 blaze affected the Athabasca River.

In May 2016, the fire swept through nearly 6,000 square kilometres of boreal forest in northern Alberta. Fort McMurray lost 2,400 buildings, and 88,000 people were forced from their homes.

With damage estimates of $10 billion, it was the most expensive natural disaster in Canadian history.

Almost immediately after the city was safely cleared, Silins and his colleagues were flown in as part of an emergency reaction team to assess the threat to Fort McMurray's water supply.

Previous research has looked at how wildfires affect headwater streams in the mountains. But nobody had looked at their impacts on a large, slow, boreal river winding through wetlands.

"The extent to which the fire would impact water was highly uncertain," said Silins.

For seven months, the team sampled and tested the Athabasca and several tributaries upstream of Fort McMurray.

The Athabasca is huge — nearly a kilometre across in many places — and it drains nearly one-quarter of Alberta. It's tea-coloured and turbid, full of organic material.

The scientists were amazed when, every time it rained, they were able to detect significant increases in ash, potassium, nitrogen, calcium and heavy metals such as lead even within the river's normal load.

"It's a very, very large watershed," Silins said. "We really were not expecting to see any impact at that scale."

Four years after its flames guttered out, the record-breaking Fort McMurray wildfire continues to astound — this time with its lasting impact on an extensive river system.

Those impacts are magnified because tributary water doesn't mix evenly with the Athabasca's main flow.

"You've got a river the colour of chocolate milk and these small tributaries during certain events — a good rain, for example — look like hot fudge," said co-author Monica Emelko of the University of Waterloo.

"That hot-fudge sauce doesn't necessarily mix in. That plume that extended for a very long distance, hugging the riverbank, is likely what was making its way into the water treatment plant in Fort McMurray."

The fire residue also makes it harder to manage bacteria in the city's reservoir.

Emelko said the city's water has remained safe — it's just harder and more expensive to make it so. City officials have said treatment costs increased 50 per cent after the fire.

"There is a very clear signature of the wildfire on drinking water supply and treatment in Fort McMurray," Emelko said. "The community is paying a continued cost because of the fire."

In most places, fire impacts on watersheds quickly dissipate. Studies on several Alberta fires in the foothills and the Rocky Mountains, however, show that hasn't been the case.

Scientists believe the lingering presence of fire-related material could be related to the province's geology being rich in fine-grained sediments.

"There, we have certainly seen a long persistence of those fire effects — far longer than has been reported in most other regions worldwide," Silins said.

Climate and forest scientists have long suggested that huge fires such as the one dubbed "the Beast" in Fort McMurray are going to become more common as warmer temperatures dry forests out and extend the burning season.

"As climates have shifted, and we're very clearly seeing a shift in wildfire behaviour, we're going to see these kinds of impacts on water more and more often," said Silins.

"Fires are impacting a far broader range of ecosystem values and human values than we thought. This is something we're going to have deal with on a far more regular basis."

This report by The Canadian Press was first published July 10, 2020