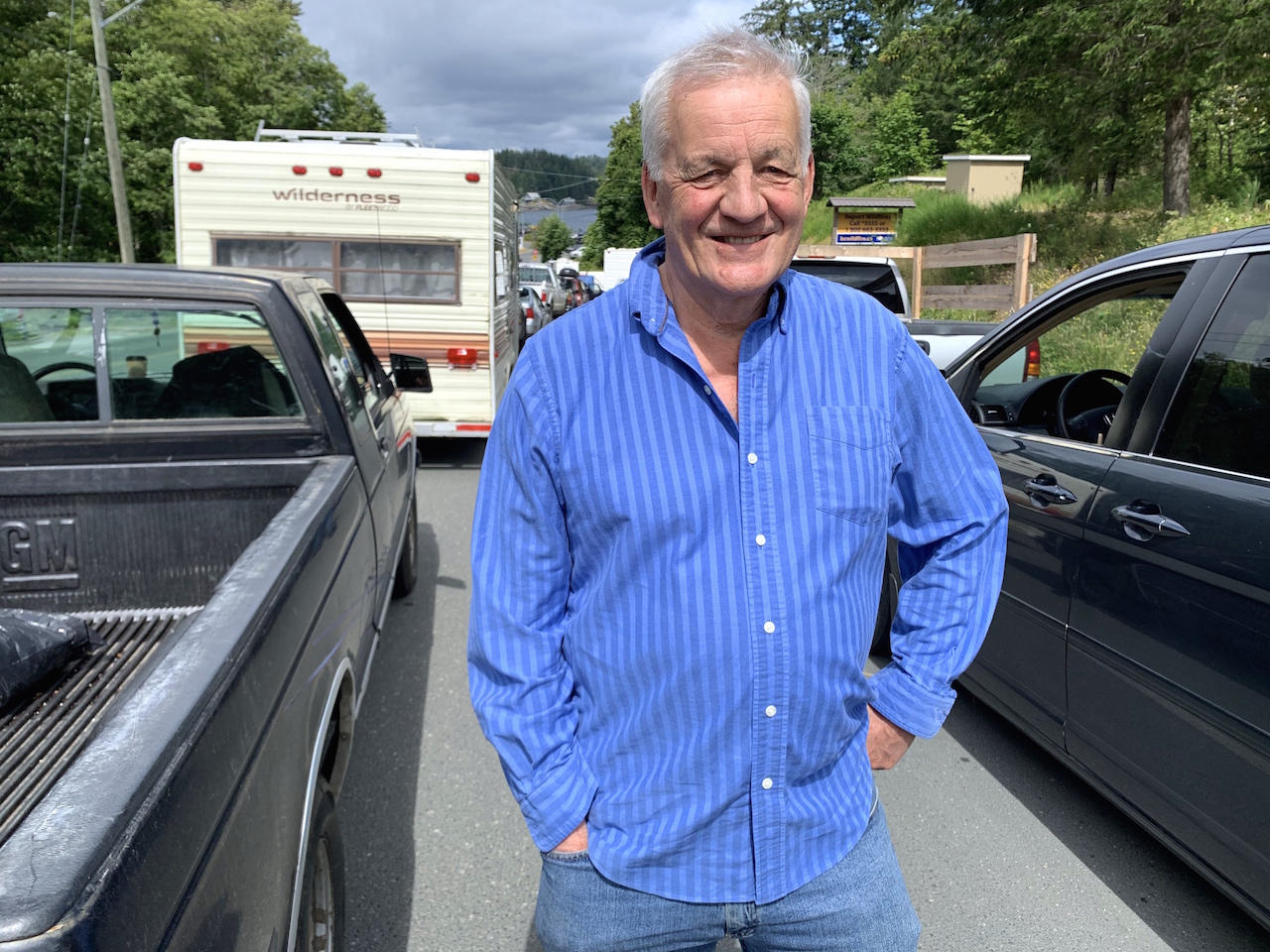 Quadra Island resident Alan Atkinson was one of many travellers trapped in a long BC Ferries overload line on Thursday in Quathiaski Cove. Photo Rochelle Baker
Previous story
Next story

B.C. islanders are feeling trapped and calling for action on a Covid-19 measure that allows residents to board ferries first as the summer tourist season heats up.

Gruelling sailing waits in B.C.'s Discovery Islands have surged again, as the province relaxes guidelines on non-essential travel as part of its COVID-19 reopening plan.

“It’s crazy,” Johnston said of the ferry traffic that regularly spills out of the parking lot and holding lanes, and up the hill from the terminal into Quadra's road ways.

“If this is what we’re seeing in a summer with travel restrictions, imagine what will it be like in the future.”

And for neighbouring Cortes Island residents negotiating a two-ferry journey, the waits are even longer.

For ferry-dependent communities such as Quadra and Cortes, located off Vancouver Island's northeast coast ­— and for a score of other coastal communities in British Columbia — ferries are often the sole practical lifeline to work, school or medical appointments.

But BC Ferries is not acting on a temporary emergency ministerial order that permits residents priority boarding, and which the Ministry of Transport confirms is in place.

“Last summer I was dealing with numerous medical appointments with my dad who was suffering from a serious medical condition,” Johnston said.

“He wasn’t able to sit in a car comfortably for long periods of time, and that made it really hard.”

“It’s crazy. If this is what we’re seeing in a summer with travel restrictions, imagine what will it be like in the future," Islander Sarah Johnston on BC Ferries overloads and residents needing priority boarding as per the existing emergency order.

They did their best to avoid rush hours, but medical appointments typically fell into peak travelling periods, she said.

Johnston has asked about the priority boarding option at the ticket booth in Campbell River on several occasions. Attendants provided a variety of explanations why it wasn’t being offered, such as inadequate staffing levels and logistical issues, such as insufficient holding areas in smaller terminals, Johnston said.

“I don’t see why it’s that big an issue,” Johnston said, adding that preferred boarding measures wouldn’t have to be for every occasion or sailing.

She’d like to see a “get out of jail free” pass issued to residents on a once weekly basis for essential or unavoidable travel.

“I’m sure part of the resistance is, if they did it under the order and it succeeded, what reason would they have not to continue into the future,” she said.

'It is becoming an issue on many routes'

BC Ferries spokesperson Deborah Marshall confirmed that residents and essential goods and workers are temporarily being given priority on sailings during the state of emergency due to the pandemic.

“It wasn’t an issue in the beginning of the pandemic, because our traffic had completely fallen off,” Marshall stated in an email Tuesday.

“Now that traffic is coming back and the province has lifted 'non-essential' travel (guidelines) it is becoming an issue on many routes.”

But Marshall did not clarify why priority boarding wasn’t being offered to Discovery Island residents, as it has been on other routes such as the Sunshine Coast.

The BC Ferries website states customers will be asked at check-in if they qualify for priority boarding. The website also recommends people make reservations if they want to ensure priority on a specific sailing.

However, reservations aren’t available on smaller routes serving Quadra and Cortes islands and other island communities in the inside passage between the mainland and Vancouver Island.

'We’re being double dinged as residents'

Quadra Island regional director Jim Abram said it is clear islanders should be getting preferential boarding.

“The ministerial order is very clear that residents have priority loading as long as we’re in a state of emergency,” Abram said.

Workarounds are likely possible to logistical issues, he said.

“We have really good people working at the booth, and they are always careful about loading properly,” he said.

“They are very creative and can probably find ways to hold (vehicles).”

Priority boarding exists for those with urgent medical emergencies and Cortes residents already get preferential boarding to Campbell River twice a week on a morning sailing, Abram noted.

It shouldn’t be out of the question to make similar arrangements for Quadra residents, he added.

“We pay taxes, but we also pay a healthly fare towards the operation,” he said. “We’re being double dinged as residents.”

High-season traffic makes it difficult for residents to get to work, appointments or attend business, he added.

“It is almost impossible to use the ferry system when it is completely clogged with non-residents,” Abram said, noting the current focus on staycations has brought more and larger vehicles with campers, boats and RVs to the island.

“We have accommodated and welcomed tourists, and we still do, but the situation just happens to have changed… we are in a worldwide pandemic.”

“It would be a very interesting trial to see if they can do it, and if they can, it would be important to have a more in-depth conversation about whether it can be implemented moving forward.”

But not all residents agree with the notion of preferred boarding.

Quadra resident and retired BC Ferries captain John Arnold said everybody feels they have a justifiable reason to get on the ferry before someone else.

Everyone who chooses to live on the islands knows ferry waits in summer have been an issue for decades, he added.

“(It’s like) someone building a tree house and then demanding someone else supply the ladder,” Arnold said.

He suggested residents are best served by adapting practical measures, such as leaving a second, cheap car across the water and walking on board.

“I only go when I have to, consolidate errands as much as possible, and the number one rule is to go and get back early,” Arnold said.

He also thinks it would be a logistical nightmare for attendants at the smaller terminals to organize priority boarding.

Quadra resident Alan Atkinson was one of many travellers stranded in a long vehicle backup that snaked its way out of the Quathiaski Cove ferry terminal on Thursday.

But he still feels first come, first served is the fairest option.

“We’re all paying the same taxes for the system,” Atkinson said.

He noted he was heading to Campbell River to shop, but could have come for a less crowded sailing.

“I don’t necessarily have to be here right now,” he said.

Transportation Minister and local MLA Claire Trevena also confirmed that the ministerial order was in place.

The province has the expectation the order be acted on, but operational issues fall to BC Ferries, Trevena said Friday.

“We’d hope BC Ferries would be respecting the order, but there is always what the implementation is on the ground,” she said.

BC Ferries must balance both commercial and public interests when making operational decisions, Trevena said.

Priority boarding is a temporary measure under the order, and caution needs to be exercised to avoid pitting residents against tourists, especially given many coastal economies such as Quadra are reliant on tourism, she added.

“We want to avoid getting a battle about that,” Trevena said.

“We know coastal communities are reliant on BC Ferries,” she said.

“We as a government are committed to system that serves B.C. residents, but that also includes every B.C. business.”

[Editor’s Note: UPDATE: Following the publication of this National Observer story, BC Ferries updated its website around the issue of preferred boarding for residents. The company states it will make “all reasonable efforts to get essential goods and residents on the sailing.” BC Ferries stated this does not guarantee residents travel on the next sailing, or that customers with reservations would be bumped. The company also said it is not an enforcement agency, and cannot check customers’ identification for proof of residency, as it would cause long waits outside the terminal during busy periods. It also asked customers to practice honesty, kindness, and patience with BC Ferries employees who are adjusting to a new normal during the pandemic.]

“We as a government are

“We as a government are committed to system that serves B.C. residents, but that also includes every B.C. business.”

Clearly the ministerial ‘order’ is being practically applied as a guideline. Without enforcement, people travelling to the islands while the order is in place, will quickly learn how to game the system. Human nature being what it is, and without enforcement, such as asking for a piece of mail and drivers licence, these guidelines will not work the way they are hoped to...promised to.

The practical outcome is, that residents who are stuck in line-ups waiting to get away, or get home, are carrying the weight of responsibility we all share for supporting businesses and individuals who rely on the income from the tourist season. Vacation rental properties, liquor stores, grocery stores, and shopping outlets in our communities are all staffed by people living in our communities. These store fronts are rented in buildings often owned by people living in our communities. We’ve all seen the empty ones, and in times like this, vacant store fronts can be a harbinger of economic decline and social decay. Petty crime is up.

The Ministerial order has no teeth, and if we could sift through the frequent zoom conversations between our local governments and provincial government leaders we would hear appeals for action, and we would hear carefully couched language in response. Good government policy seeks to strike a balance, both in the wording and implementation, but also by predicting human behaviours and outcomes. What is also true, is that government can’t always tell the truth about it because that truth could be weaponized in the arena of partisan politics.

Viewed on balance, it would seem that it is up to ferry dependent residents to do the very best they can to make the best of it, just like business owners, commercial property owners and folks who rely on tourism for their livelihood are doing during the pandemic. In the mean time, all of us can be proud of how well we are doing as a community of humans. As we are seeing elsewhere, things could be much, much worse.