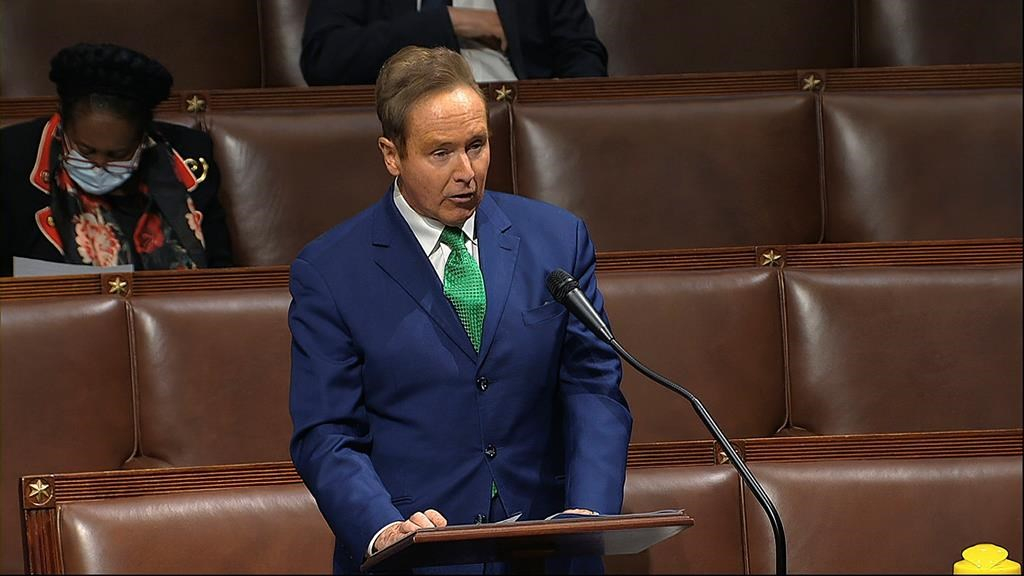 In this image from video, Rep. Brian Higgins, D-N.Y., speaks on the floor of the House of Representatives at the U.S. Capitol in Washington, on Thursday, April 23, 2020. File photo by The Associated Press/House Television via AP
Previous story
Next story

A Canadian cabinet minister was among the guests waiting in the virtual wings of a recent Zoom panel when the moderator posed one last question to the chairman of the U.S. House Intelligence Committee, promising the discussion would "move to Canada" next.

Rep. Adam Schiff couldn't resist: "We may all be moving to Canada soon," he deadpanned.

But as a resurgent COVID-19 ravages the U.S., fuelled by cavalier openings in states like Florida and Texas and a White House determined to resurrect the economy at all costs, the red-alert status spreading across the continent's lower half has more Canadians than ever ignoring America's increasingly persistent knock.

An online poll by Leger and the Association for Canadian Studies released this week found a whopping 86 per cent of respondents in Canada opposed to letting U.S. tourists north of the border, compared with 11 per cent who supported it. An Abacus Data poll out Friday found much the same thing.

And when Rep. Brian Higgins, a New York Democrat, updated his bipartisan call for a plan to reopen the border, the ensuing Twitter barrage of sarcasm, satire and outright anger belied Canada's reputation as a bastion of civility, replete with memes of building walls, slamming doors and Bugs Bunny taking a handsaw to the 49th parallel.

Higgins took it all in stride.

"I don't blame them for wanting us out of there," the congressman said Friday of the Canadian reaction.

When the outbreak first took hold in North America in March, Canada and the U.S. agreed to close their shared border to discretionary travel while allowing the movement of goods and essential workers to continue. That initial 30-day agreement has been extended three times now, and will surely be extended again before its next July 21 expiry date.

Since March, the U.S. has seen more than 3 million cases and 133,000 deaths, and the crisis is accelerating in states across the union. Florida is breaking records daily for new COVID-19 cases and deaths. In Arizona and Texas, one in four tests is coming back positive. Further north, states like Wisconsin and Michigan are seeing fresh spikes in their active caseloads. Hospitals are again rapidly nearing capacity.

In their letter last week to acting Homeland Security Secretary Chad Wolf and Canada's Public Safety Minister Bill Blair, Higgins and 27 other members of Congress, Democrat and Republican alike, urged the two countries to stop kicking the can down the road and draft a detailed plan for the gradual reopening of the border.

"The continual 30-day extensions without a plan for how restrictions will be modified prolongs uncertainty for both communities and creates unnecessary tension as we approach each new expiration," they wrote.

"We are asking that the United States and Canada immediately craft a comprehensive framework for phased reopening of the border based on objective metrics and accounting for the varied circumstances across border regions."

That doesn't mean throwing open the border to Americans, Higgins said. But it could mean redefining essential travel to include foreign property owners and people with business interests or family members on the other side, provided they wear masks and practice physical distancing.

"Never in our lifetime have we had a situation where the health of you and your family is dependent on your fellow citizens to do the right thing," he said.

"A phased opening could expand the category of 'essential traveller,' but (include) certifying some way that you are adhering to the Centers for Disease Control and Prevention's protocol as it relates to stopping the spread of COVID-19."

Ontario Premier Doug Ford, a pro-trade conservative and longtime champion of Canada-U.S. ties, has been among those urging zero tolerance at the border until the crisis in the U.S. has passed — a position spokeswoman Ivana Yelich reiterated Friday.

"The premier has been clear: the border must remain closed to non-essential travel until the U.S. has made significant progress in containing COVID-19," Yelich said. "The recent spike in the number of COVID cases in the U.S. is very concerning. As such, the premier will continue to support restrictions at the U.S. border beyond the July 21 deadline."

The worsening public health situation in the U.S. has not diminished the importance of cross-border business travel, including face-to-face meetings or technical on-site visits, to the health of Canada's economy, said Mark Agnew, director of international policy with the Canadian Chamber of Commerce.

Despite the best efforts of both countries, the current border measures have been confusing for some, causing stress and delays even for those who have work permits that allow them to cross, Agnew said.

"It would be helpful for the government to set out the circumstances under which border measures will start to normalize, to enable companies to plan."

Despite the political challenges the U.S. outbreak now poses for the federal Liberal government in Canada, it's past time to start thinking about how to ease the border restrictions, said Laurie Trautman, director of the Border Policy Research Institute at Western Washington University in Bellingham, Wash.

"There is an immediate need to be more thoughtful and strategic about how our countries go about doing that," Trautman said, floating the idea of wider family exemptions and allowing homeowners to visit their foreign properties.

In northern Washington state, law enforcement is growing concerned about the challenge of protecting vacant homes owned by Canadians, she added.

"Grandparents should be able to see their grandkids," Trautman said. "Exempting these two groups from the restrictions would not ‘open up the floodgates’ and seem reasonable and empathetic to me."

This report by The Canadian Press was first published July 10, 2020.

Simply, a loud and clear NO!

Simply, a loud and clear NO!

A healthy economy is directly related to healthy citizens. The two jurisdictions are just too far apart on pandemic management policy, especially considering BC where COVID management has been exemplary when compared to almost every other jurisdiction in the world.

It ain't worth the risk.

Until the US gets more

Until the US gets more control our border MUST remain closed. We have given up far too much, suffered too many losses, to open up. Especially considering the number of US folks resistant to mitigation efforts of all sorts; and the famous "exceptional" tendency to not like being told what to do.

NO. As a Grandparent, I

NO. As a Grandparent, I prefer my Grandchildren safe and alive, and can wait until this pandemic is no longer a threat to myself and them.
The USA is in a Covid meltdown. Why are we even having this conversation?

Because some idiot policy person who hasn't bothered to inform herself about asymptomatic transmission -- most likely in kids -- and the deathly impacts on grandparents.
I.e., same idiocy as their leader.

We the people of Canada do

We the people of Canada do not need any people like the unethical Shifty Schiff.

Is that you Devin Nunes?

Is that you Devin Nunes?

I challenge any reader with a

I challenge any reader with a brain to look up the current mortality rate of COVID19, and then turn to a dictionary and look up the definition of "pandemic."

For a further laugh, look up the definition of an emergency under your province's emergencies act (Emergency Management and Civil Protection Act in Doug Ford's "Open for Business" Ontario).

None of these restrictions are justified. Educate yourselves, folks! The media definitely won't do it for you.

Perhaps you could look up the

Perhaps you could look up the histories of the pandemics of measles, diphtheria, smallpox, polio, etc., and contemplate the damage done before there were vaccines or even a reasonable ability to isolate the affected. It's not just the death toll---it's the long-term debilities, too. These are not only personally tragic but also burdensome to the health-care system and economy in general. Through intelligent public-health measures, Canada has kept the infection rate relatively low. In states such as Texas, Florida, and Arizona, ignorance, denial and the bizarre American obsession with "freedom" (which apparently involves freedom to get sick, die, and infect others) have effected an explosion in cases, and other states are experiencing spikes since the relaxation of restrictions. It would be ridiculous to follow the American example and just hope for the best. The border should stay closed until the U.S. gets its act together. Don't hold your breath. (So to speak.)

Pandemic: adjective (of a

Pandemic: adjective (of a disease): widespread over a whole country or large part of the world. noun: an outbreak of such a disease. Definition says nothing about mortality rate. The key issue is that the infection rate overwhelms the treatment facilities such that the mortality rate becomes much higher than it should be. And the people it kills are typically the elderly. You have to be pretty cold hearted to think that your right to go to the bar outweighs their right to live.

I suppose you would need

I suppose you would need someone to do that for you since you're passing a challenge onto anyone willing to take it up.

They are justified. It doesn't take a genius to understand how quickly an outbreak spreads. You know how many people go back and forth over the border everyday when its open? People are in a panic down there. If we opened the border, everything we sacrificed would be for nothing.

If you want to stamp out an enemy like this flu virus, it has to be stamped out completely and absolutely- right down to the last infection. That's why we still have these measures even though cases are going down.

If you want to open the border so bad, just think of them as refugees. Because I kind of doubt you were so welcoming before.

I challenge anyone with basic

I challenge anyone with basic competence in arithmetic to calculate the number of deaths that would mean in Canada, were the virus allowed unbridled spread as in some states.
You're good with burying 1/3-1/2 million Canadians?
That I've lived this long is no good reason for me to flush away all the possible tomorrows.

I find it a bit concerning

I find it a bit concerning when "property owners" and the like should somehow be allowed to cross into Canada. Are these individuals somehow immune to the virus while "others" are not? We must keep a tight closure of the border to avoid the worst possible result. It concerns me a great deal right at the moment to have an Arizona license plate parked next door.

Once there is a different

Once there is a different administration AND a vaccine then maybe. One the southern wall is torn down and children reunited with their families then. MAYBE. Once it becomes apparent that ZBlack and Indigenous lives matter I both sides of the 49th then MAYBE. Once the Republican Party takes responsibility for the infections and deaths then MAYBE. But really, now an for the u for seen future NOT NOW.

Also, once the anti-maskers

Also, once the anti-maskers realize and acknowledge that this means they are pro-choice MAYBE.

Once I am allowed to go in &

Once I am allowed to go in & see my Dad in the Seniors Home & hug him, everyday, then MAYBE.