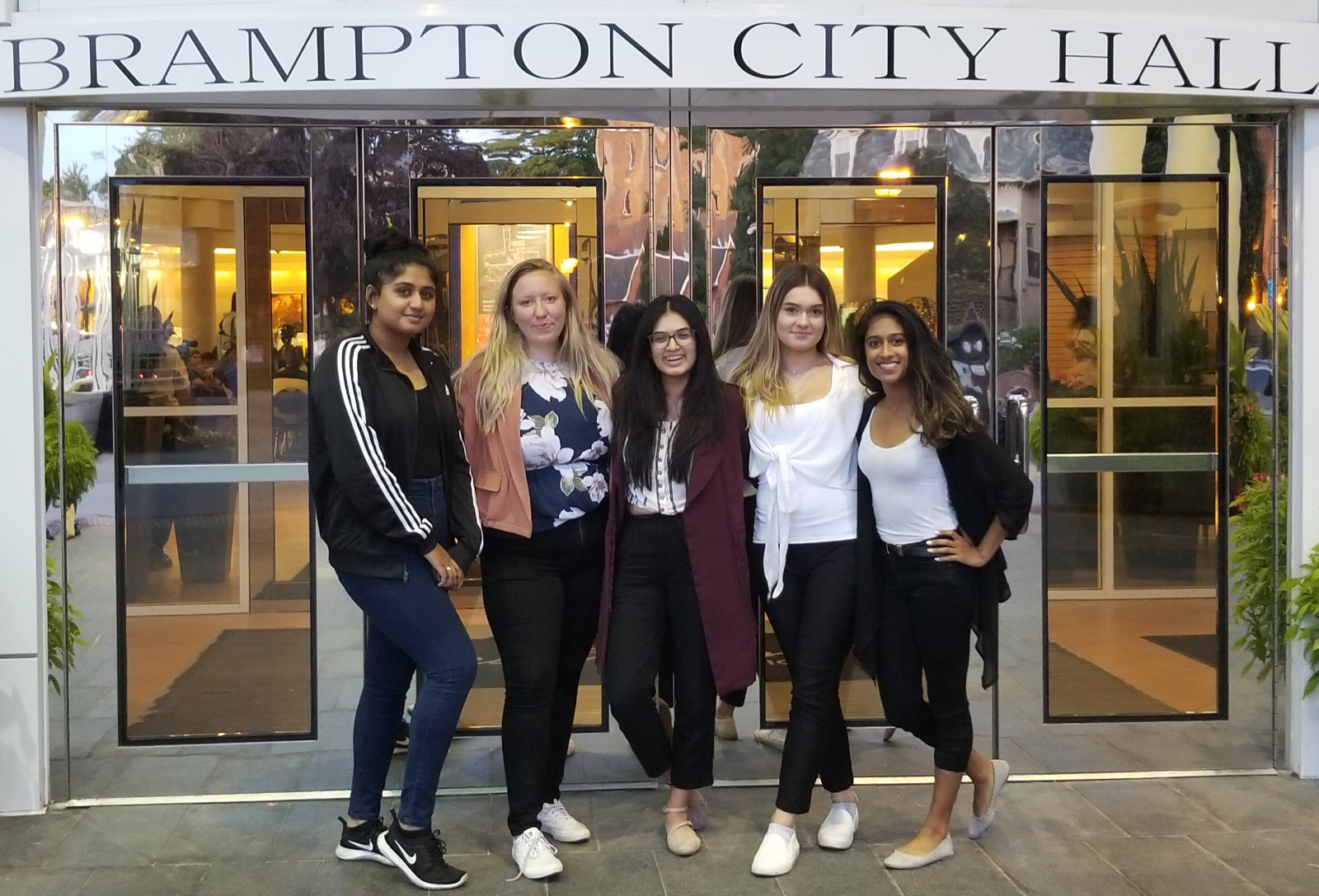 Samantha Casey likes people and the planet, and wants them both to have a future that is fair and just.

So she was up for it when Toronto-area municipalities asked her and other young climate activists to tackle a local climate challenge last summer.

Casey and the four like-minded young women she teamed up with in Youth Challenge International’s Innovate My Future program quickly understood they could connect the energy bringing them and millions of other young people onto the streets for climate justice with the suddenly-interested politicians and policy-makers who could make a difference.

“We took that to heart, the civic engagement and political advocacy piece for youth, because many of us had been to protests, we’d felt that feeling, and then had that big feeling of what's next once it ends and you go home,” she said.

So while other groups in the program worked on projects such as waste reduction campaigns and cycling advocacy, Casey and co-founders Mithila “Mia” Jeganathan, Divya Arora, Aneta Brynkus and Miranda Baksh created the Community Climate Council.

They announced their new group while organizing the Brampton, Ont., rally for the global climate protest last September in which at least six million people participated around the world.

After a vigorous interview process earlier this year, the council launched in January with an expanded list of 25 members. They plan to open for more applications in September.

They’ve since been knocking on doors and making their introductions to councillors on both the regional Peel council and those for the member cities of Mississauga and Brampton and the more-rural town of Caledon to the northwest of them.

They joined millions on the streets last year in a push for more climate action. Now @samcasey01 and @peelclimate are getting their feet in the doors of offices belonging to politicians and policymakers who can make a difference.

“Right now, we have a lot of our members meeting with councillors, asking what they're doing and also we're hoping to bring to them some solutions that are very youth-led,” Casey said in an interview.

The council champions civic engagement and political advocacy, but also aims to improve the public’s climate literacy, by raising awareness of what climate action and the effects of climate change look like locally.

That means teaching other youth what representatives of each level of government are responsible for and how to approach and talk to them about issues, or as Casey puts it, “basically creating that informed youth that we want to see that are bringing ideas to the table and then also being there at the table to bring those ideas to life.”

That’s where Camp Climate comes in.

“Camp Climate is our response to the pandemic,” said Casey, who recently graduated from the University of Guelph with a degree in environmental governance and now works in communications for the university’s sustainability office.

The eight-week schedule includes Instagram Live discussions with environmental activists, authors and executives, and events covering subjects ranging from biodiversity and conservation to active transportation and from energy transitions to food system sustainability.

One stream is targeted at younger children, involving activities and challenges developed by environmental educators to engage children and parents, and another with more webinars and panel discussions for those ages 14 and up.

The digital series kicked off last Sunday with an event meant to include a 30-minute “fireside chat” with Dianne Saxe that stretched for an hour as the audience of around 40 mostly young people peppered the former environmental commissioner of Ontario with questions.

“It’s great to know so many young people are prepared to spend part of a weekend afternoon with yet more Zooming to learn how to be more effective in climate action,” she said.

Saxe said she told the attendees what she tells every audience: reduce your personal carbon footprint, get ready for the crazy weather that’s coming, and most importantly, speak up for collective action.

She also made clear that their efforts had helped change how finance views fossil fuels, pointing to Blackrock CEO Larry Fink, who in January referenced the protests in a warning to the executives of companies the $7 trillion fund manager holds stakes in that those on the streets were ahead of the market in assessing climate risk.

“Young people speaking up can really change the conversation,” she said. “And so I encourage them to get at it.”

Saxe, who said she was “outraged and heartbroken” by being fired by Premier Doug Ford and seeing her job tucked in as a function of the auditor general’s office, said she recommended they not to waste their time trying to influence a provincial government she described as "destructive" and uncaring.

“I don’t recommend people spend a lot of time trying to influence the current provincial government,” she said. “I think there’s much better bang for buck going after pension funds, banks, insurance companies” as well as municipal and federal government.

She said she also encouraged them to track when local politicians will be addressing specific issues where they want their voice heard.

“If a decision is being made on what kind of vehicles to buy for the fire department, young people showing up at that meeting with knowledge about electric vehicles and what is happening elsewhere in the world could be really helpful,” she said.

The council is doing just that, currently focusing on amplifying the efforts of the David Suzuki Foundation to get a strong climate commitment passed in Brampton city council’s upcoming vote on its Community Energy and Emissions Reductions Plan.

“Brampton is a very youthful city, and that’s what we’re looking at, how can we target things to make a difference,” Casey said.

According to the city, the plan that followed its declaration of a climate emergency last year “aims to integrate efforts” from the municipality, local utilities and others to improve energy efficiency, reduce emissions, build resiliency to the effects of climate change and ensure energy security, while also creating economic advantage.

Casey said the council also sought to provide municipal representatives with positive affirmation when they make progress on climate goals, whether that’s the electric bus program in Brampton or the accelerated introduction of bike lanes in Mississauga.

“When the cities and municipalities are making these awesome climate action initiatives we’re there to say ‘Hey yeah, this is what we want to see, this is good’ and give them this cheer of 'This is what we need to see more of,'” she said.

Brampton, a fast-growing city which Highway 401 separates from Mississauga, secured $11 million of federal funding in July of last year for eight electric buses and the charging network to support them. Currently, more than a quarter of Brampton Transit’s fleet is made up of diesel-electric hybrid buses.

The city council voted last month to approve plans for a maintenance and storage facility that would be electric-bus compatible, but says it will need outside funding of up to $150 million more for the electrification requirement of phase one. Project costs excluding electrification were estimated at $175 million.

Casey and the team are planning to do much more.

The group took first place at a Youth Challenge International summit in late February, giving them $1,000 in seed funding and a year of co-working space at Lab B in Brampton.

They haven’t been able to make use of that yet, as the pandemic hit weeks later. But they’re moving ahead anyway, looking to form an advisory committee and get incorporated, and exploring more funding and collaboration opportunities.

One such collaboration is with the Youth Council Coalition of Canada for a guide on starting youth-led organizations, which is due out in September, following requests for such information from young people in Sarnia, Ont., and Windsor, Ont.

Casey says they want to create an incubator hub where young people come to develop their ideas and provide resources, so students can take actions such as performing an energy audit on their school.

Three months ago, the council started running a climate café on the last Sunday of the month, with topics of virtual discussion including climate anxiety and ecological grief.

They are also taking submissions of poetry, spoken word, photographs and video for a zine about the climate protest movement that will be made available digitally and in a small batch of physical copies for those who get involved.