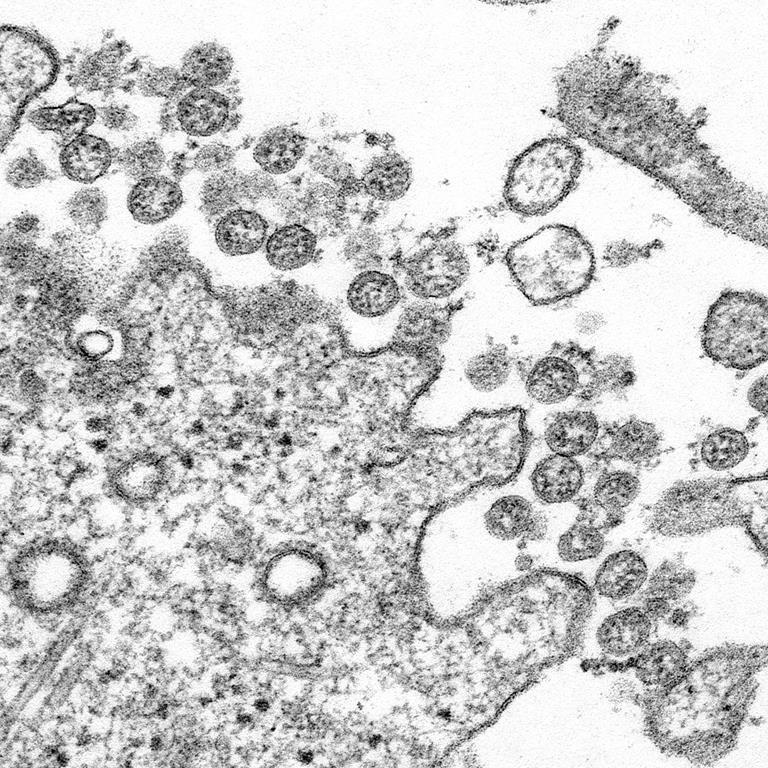 This 2020 electron microscope made available by the U.S. Centers for Disease Control and Prevention image shows the spherical coronavirus particles from the first U.S. case of COVID-19. File photo by The Associated Press-C.S. Goldsmith, A. Tamin/CDC
Previous story
Next story

Adrian Dix said during a news conference Monday that warnings of possible exposures at a restaurant, spin studio, bed and breakfast and resort are believed to stem from "private parties" at the hotels.

Eight positive tests for the disease are linked to visits to downtown Kelowna and the city's waterfront between June 25 and July 9, said an email from Interior Health, the regional health authority.

"When people come together for private parties — in this case it was primarily people in their 20s and 30s — the risks are considerably higher," Dix said.

The exposures follow the move to a new phase of reopening in B.C. that allows for tourism within the province. Although the accommodation industry was not ordered to close during the pandemic, many operators did so voluntarily but began welcoming guests again as part of the new phase.

Infections in B.C. inched up on Monday as health officials announced 62 new cases since Friday.

Two more people also died for a total of 189 deaths in B.C.

The new figures bring the total number of confirmed cases in the province to 3,115, while 2,718 people have fully recovered from COVID-19.

Interior Health also issued an isolation order for Krazy Cherry Fruit Co. in Oliver after two positive tests associated with the farm. Public health officials are monitoring the situation and placed restrictions on those living and working on the farm, the government said in a news release.

The cases linked to Kelowna involved people who live in three regions of the province, including the Interior, Fraser and Vancouver Coastal Health regions, said Dix. He credited contact tracers with making the connections.

He said the tourism industry has done a good job of creating safe environments for guests, but it's also up to guests to ensure they respect physical distancing guidelines and group size limitations.

"Whether it's a trip or a party at home, the same risks and the same rules apply," Dix said.

If you're gathering with friends and family, you should consider the increased risk that indoor locations pose and determine how many people can maintain a safe distance accordingly, he said.

"We have got to live with COVID-19 for the next year so that means the responsibility is on all of us to understand the risks and understand our responsibilities to one another."

Interior Health issued an exposure advisory for the resort and bed and breakfast on Friday and added the restaurant and spin studio in a statement on Sunday.

Visitors to the Boyce Gyro Beach Lodge on July 1 or the Discovery Bay Resort from July 1 to July 5 were advised to self-isolate and monitor themselves closely for symptoms.

The health authority is now urging visitors to Kelowna's Cactus Club restaurant on Water Street between July 3 and July 6, or the Pace Spin Studio on July 2, 4, 5, 7, 8 and 9 to self-monitor and get tested if COVID-19 symptoms appear.

The B.C. Centre for Disease Control also warns that a case or cases were confirmed on an Air Canada flight from Kelowna to Vancouver on July 6, but Dix could not say if that warning was linked.

Public health contact tracing is underway and the health authority said it's reaching out directly to anyone who has been exposed, where possible.

Testing is recommended for anyone with novel coronavirus symptoms, including fever, cough, shortness of breath or difficulty breathing, or a loss of taste or smell, said Interior Health.

Anyone with even mild symptoms is urged to stay home and avoid travel.

Efforts to slow the spread of COVID-19 include physical distancing, regular hand washing, not touching the face and avoiding gatherings of more than 50 people, the health authority said.

This report by The Canadian Press was first published July 13, 2020