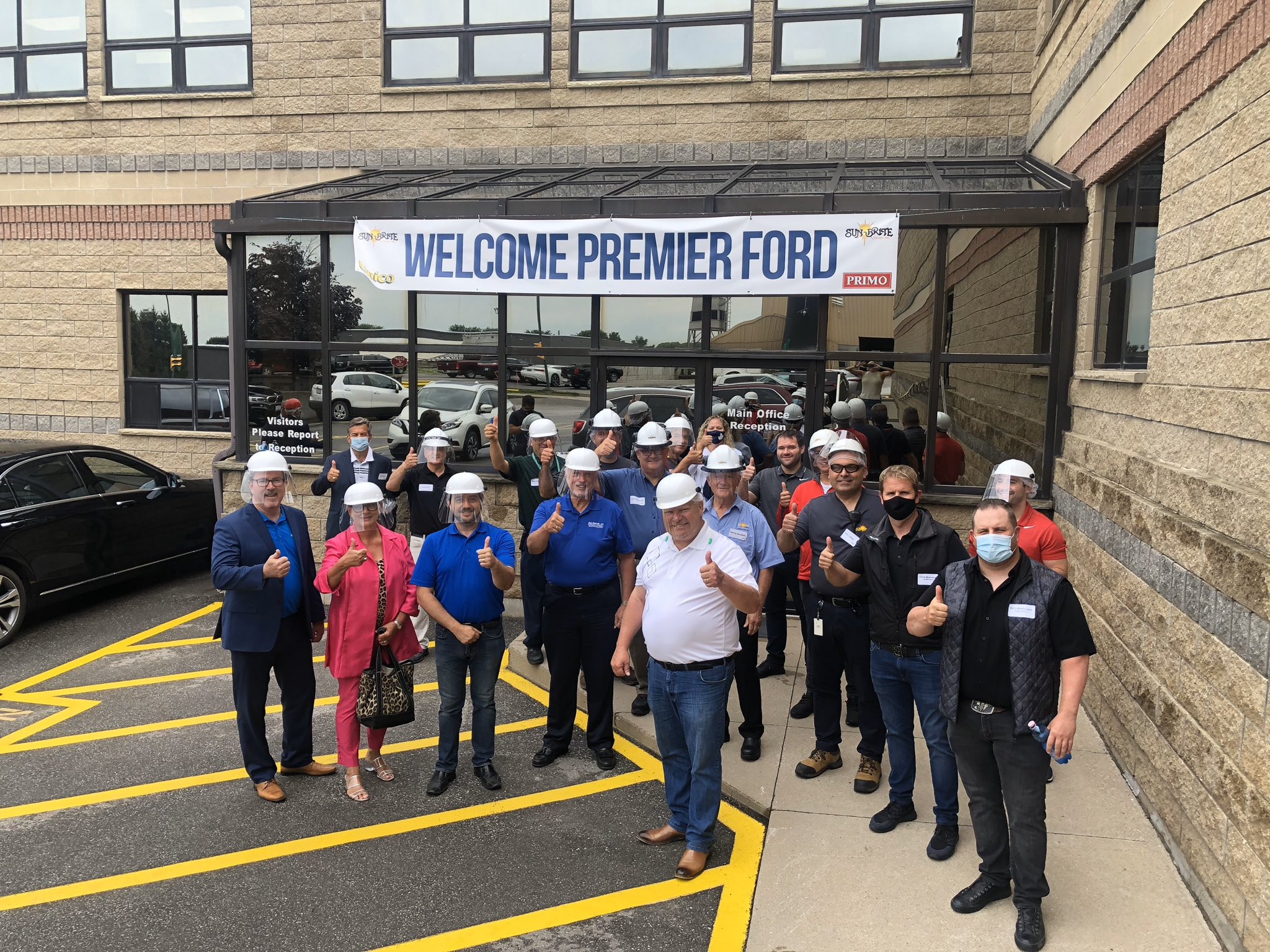 Ontario Premier Doug Ford visits Sun-Brite Foods in Leamington, Ont. on July 16, 2020. The premier is being criticized for promoting the cannery, which has been fined in the past for environmental offences. Photo from Doug Ford/Twitter
Previous story
Next story

Premier Doug Ford is under fire Thursday after promoting a cannery owned by Progressive Conservative donors who have been fined for environmental offences.

Sun-Brite Foods president Onorio (Henry) Iacobelli and his wife, Lina, donated a total of $4,922 to the PC Party in 2018 and 2019, Elections Ontario’s political contribution database shows. Ford visited the southern Ontario cannery Thursday, part of a summer tour the premier said was meant to thank the public for doing their part during COVID-19.

The company has twice been reprimanded by Ontario’s environment ministry — once in 2018 for releasing toxic water that smelled like sulphur, resulting in a fine of nearly $300,000, and another in 2012 for dumping waste on farmland without permission.

“While visiting Sun-Brite Foods Inc. today, I saw some of the best quality Ontario grown tomatoes!” Ford wrote in a tweet about his visit. “These guys are the #OntarioSpirit.”

Ford has previously denied that the tour amounts to campaigning. The premier has faced criticism in the past for telling Ontarians to visit businesses owned by PC donors.

The connections with Sun-Brite were first reported by Global News.

“This is a clear case of ‘follow the money,’” said Ontario Green Party Leader Mike Schreiner in a statement.

“We need a premier who will create laws that reward companies for doing the right thing and not treat laws that protect our water as red tape.”

Ford’s office and Sun-Brite Foods did not immediately respond to requests from National Observer.

Sun-Brite Foods Inc. has been a leader throughout #COVID19. They practice physical distancing, use sanitizer stations, temperature checks, and offer voluntary on-site testing. Happy to meet the people behind this gold standard!🥫 pic.twitter.com/sy0sgPsHfG

The cannery is in Leamington, Ont., southwest of Chatham-Kent. The company operates the brand names Unico and Primo, and works for clients such as Heinz and Campbell’s.

Premier Doug Ford is under fire Thursday after promoting a cannery owned by Progressive Conservative donors who have been fined for environmental offences. #onpoli

After residents of nearby Kingsville, Ont., complained about a foul smell coming from a drain, inspectors found water that was blackish-grey, warm, smelled like sulphur and was toxic to aquatic life. The company pleaded guilty to two charges.

The company also received a slap on the wrist in 2012 when it spread stinky organic waste onto farmland without getting provincial authorization, prompting complaints from neighbours. The government did not fine Sun-Brite, as the company voluntarily agreed to fix the problem.

Schreiner pointed to Bill 132, a piece of legislation the Ford government passed last year that lessened many fines for polluters.

“Doug Ford is rewarding not just a PC donor, but a company that was fined $287,500 under water protection laws that the Conservatives have since weakened,” Schreiner said in the statement.

#DYK that #Leamington is the tomato capital of Canada? And while visiting Sun-Brite Foods Inc. today, I saw some of the best quality Ontario grown tomatoes! These guys are the #OntarioSpirit. They’ve led the pack in safety and donated $100,000 and food to support a local hospital pic.twitter.com/aM0rOBBONm

This exposure of facts is

This exposure of facts is critical to understanding what story is behind the headline. Kudos!!

There is always a risk of

There is always a risk of potential harm to workers, the public and the environment in our
industrial world, which in some cases includes the food industry.

By Ontario law, all operators and employees must be fully aware of the hazards that exist in their workplace. The rationale is that despite our safety policies and practices, accidents can occur. Accidents being described as
human error, equipment failures, events beyond their control (Storms, power failures...).

Environmental offences that are not accidental but the result of decisions made by those responsible shouldn’t be treated in the same light as true accidental events. The penalty for non- accidental violations requires a graduated format; similar to how we view theft under $5,000 versus over $5,000 or manslaughter versus second degree murder.

A business doesn’t accidentally flood a field with refuse. The intent and attempts to hide wrong-doing and the failure to report events should all be treated with the same level of seriousness of the original offence! The operators cannot claim ignorance of the impact of the error or their duty to report.

I am equally concerned that the Premier was promoting a site that was generous to his campaign and that had a history of some practice violations as I wonder if he will visit a business that hasn’t had any environmental or other breaches and that didn’t t contribute to his campaign and maybe even supported other Ontario parties? It would be helpful for his campaigning to be seen as truly for ALL THE PEOPLE of the province because two years into his time in office and the “For the People” commitment seems to have gone the way of his very unfortunate “buck-a-beer” election promise.

Taxpayers can be very forgiving but the key is owning up to errors, accepting our role in the error and making the error right! What taxpayers despise is the more common denial, whatabouism, deflection etc.

Do better Mr Ford as you will need a lot of support to hold onto power at the next eclection!