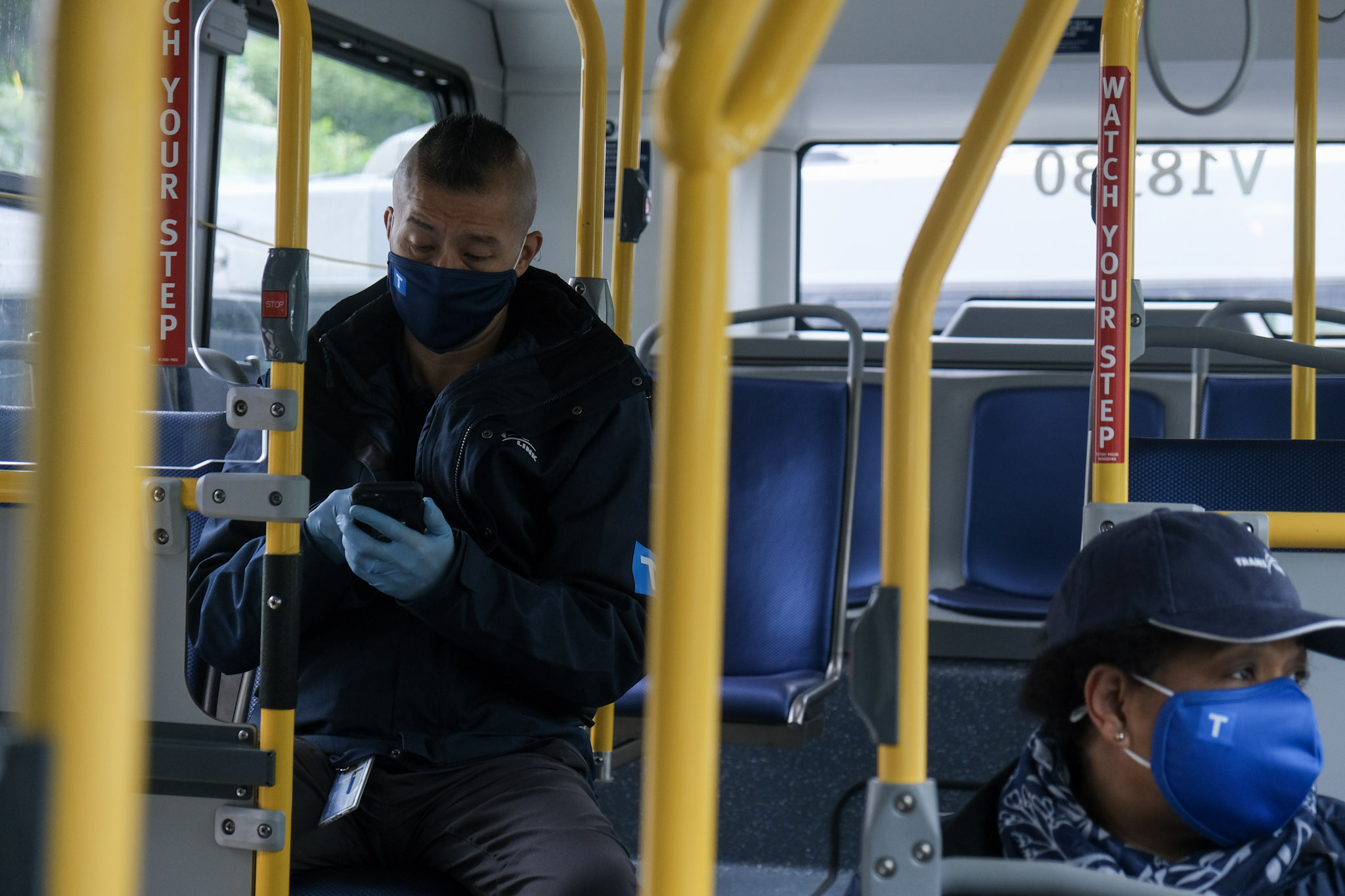 Workers on a bus in B.C. Photo: TransLink Twitter
Previous story
Next story

A $19-billion “safe restart agreement” has been reached with the provinces and territories, Prime Minister Justin Trudeau announced earlier in the day, meant to fund efforts to combat the coronavirus pandemic for the next six to eight months.

As part of this package, the federal government is offering a "temporary income support program" that will provide workers 10 days of paid sick leave related to COVID-19, if they don't already have access to this benefit.

Horgan, Yukon Premier Sandy Silver and Manitoba Premier Brian Pallister have been advocating for such a national program to help Canadians avoid having to choose between working while sick and losing income during a pandemic.

More than half of workers in B.C. between 25 and 65 years old do not have any paid sick days, according to a survey by the BC office of the Canadian Centre for Policy Alternatives. Workers with low incomes are also much less likely to have any, they found, including 89 per cent of those earning less than $30,000 a year.

“I’m particularly proud of our ability here in British Columbia to push the rest of the country to embrace the idea of a paid sick leave program, nationally funded and nationally co-ordinated,” Horgan said during a press conference Thursday.

The government said the program, which it estimated to cost $1.1 billion, will "encourage workers to remain at home and seek public health advice if they are showing symptoms."

"To safely restart the economy, Canada must ensure that workers do not return to work if they have COVID-19 or are showing symptoms," reads a backgrounder from Trudeau's office.

Provinces and territories will need to pass legislation or regulations that will protect the jobs of workers who are taking advantage of the 10 days being offered, the government said.

B.C. plans to roll out its own $1.5-billion recovery package in the coming days. Horgan said those details are being finalized now and had originally included paid sick leave until Ottawa said it would pick up the bill.

The province recently forecasted a deficit of $12.5 billion for 2020-21 and has seen job losses of 235,000 since February. After distributing more than $5 billion in financial aid, B.C. is bracing for over a billion dollars in losses in income tax and sales tax.

The government will also be providing two streams of joint funding with the provinces and territories, one for public transit and another for municipalities.

Public transit funding has been a major issue for B.C., Ontario and Quebec. TransLink in Metro Vancouver was expected to lose almost a half-billion dollars in revenue in 2020 as ridership plummeted, according to the Mayors’ Council on Regional Transportation.

One of the “sticking points” over the restart plan was that Ottawa had initially capped transit funding, said Horgan, such that he said it would have been entirely absorbed by Vancouver, Toronto and Montreal.

“We anticipate we’re going to be needing in the neighbourhood of $600 million to get back on track...just for this year," he said.

Ontario Premier Doug Ford, speaking from a farm in the province's southern region as he embarked on a provincial tour, described the overall federal funding as “desperately needed.”

Ontario’s share of the cash is roughly $7 billion, he said. Ford thanked Freeland and Saskatchewan Premier Scott Moe for their leadership on the deal, along with mayors of Ontario cities who he said gave “unwavering support” during negotiations.

Editor's note: This story was updated at 9:18 p.m. ET on July 16 to correct that the federal government is offering 10 days of paid sick leave related to COVID-19, not six. It was updated again at 10:36 p.m. ET the same day to include additional information published by the prime minister's office.

B.C.'s budget surges to $12.5 billion deficit due to COVID-19 pandemic

10 days of paid sick leave...vs 14 days quarentine if requiredd by public health vs. unknown to most the actual duration of even a mild case of covid-19, vs the months long hospitalizations for people with severe cases.
10 DAYS of pay!
The scales of economic damage, the disparities of compensation (between wealthy corporate entities and frontline, essential workers) the egregious failures of the (mostly for profit) LTC facilities simultaneously paying out billions to investors...the dismal litany of the injustices, the unbridled greed of the opportunists, the malicious and the reckless - willing to perpetrate what amounts to mini, individual acts of genocide?

Human society, or too many parts of it, are demonstrating why the species must be re-named - anything but "sapiens"