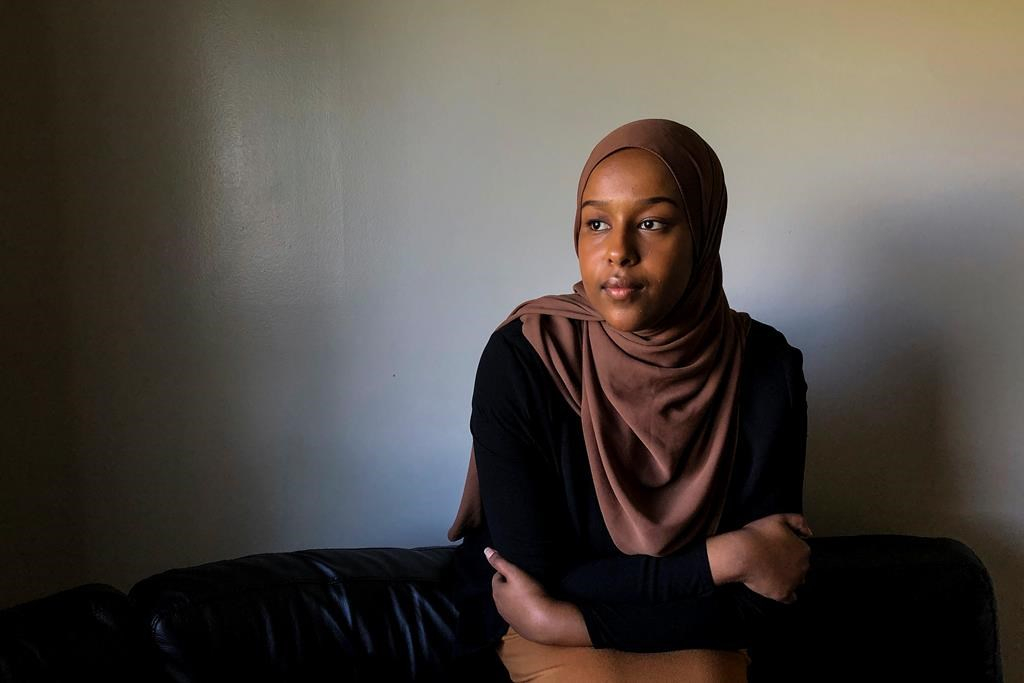 Asmaa Ali is photographed at home in Edmonton, on July 17, 2020. She is the co-creator, along with her friend Habon Ali, of a Canada-wide comprehensive list of resources for survivors of sexual assault. File photo by The Canadian Press/Amber Bracken
Previous story

Two Somali-Canadian advocates have created an online resource specifically for racialized survivors of sexual assault, saying a centralized guide is necessary to fill gaps in both the health-care and justice systems that leave marginalized women behind.

Habon Ali of Toronto and Edmonton's Asmaa Ali said existing resources are either scarce in nature or scattered across the internet, making it difficult for victims to track down the help they need. The women contend the issues persist both in the immediate aftermath of sexual violence and further down the road when victims need medical rather than legal support.

Spurred on by both the patchwork of systems at home and the death of a Black Lives Matter activist abroad, the women compiled a 28-page document listing resources including help lines, legal services and places to obtain sexual assault kits across the country.

"It was important for us to put together these resources because there's a barrier in finding them and we did our best to remove them," said Asmaa Ali, a registered nurse and recent graduate of the University of Alberta.

She said sexual violence resources in Canada are seldom geared towards intersectional communities and often leave Black, Indigenous and other people from racialized communities out of the conversation.

She and Habon Ali sought out resources that included those communities, adding their focus was on providing support to vulnerable women with intersectional experience.

The guide is also intended to provide additional help for students and immigrants, groups Habon Ali cited as particularly likely to fall through the cracks of Canada's current systems.

She said language barriers often make it difficult for ethnic minority groups to find and secure the help they need.

"Sexual violence is pervasive across all social and cultural boundaries globally and its important we acknowledge the systemic inequalities that result in racial health disparities," she said.

Asmaa Ali said both women felt moved to take action in Canada after reading about the suspicious death of a young activist in the United States.

Oluwatoyin Salau was a 19-year-old advocate who went missing in early June after tweeting about being sexually assaulted by a man. She was found dead in Florida days later. Aaron Glee Jr. 49, is now charged with second-degree murder,kidnapping and sexual assault in connection with her death.

Both Canadian advocates said Salau's death highlights a stigma Black women face when they speak up against their assailants. The fact that some pay a heavy price for self-advocacy, bolstered by a growing number of online anecdotes detailing similar treatment, is what prompted them to make sexual assault supports more readily available at home.

The decision to include students in the guide's scope was welcome news for Sara Reza, who attends York University's Schulich School of Business and founded the social media account SilencedatSchulich, where racialized sexual assault survivors can share their experiences of violence and racism.

She said the number of students of color who don’t know where to turn after an alleged assault is "overwhelming and heartbreaking."

"Oftentimes, women of colour who are victims of sexual violence in this country come from marginalized communities that are underfunded and do not have the adequate resources to help them," Reza said.

That holds true long after the trauma of an assault, according to Siham Rayale at the University of Toronto.

The women and gender studies lecturer said systemic racism exists throughout the health-care system, citing questionable assumptions about women of colour that shape the way medical professionals have historically responded to their concerns.

"We know there have been countless studies that show what medical professionals are taught about the tolerance that women of colour have for pain," Rayale said, adding such attitudes give women in need of care short-shrift when they need help the most.

She described the new online resource guide as "necessary and lifesaving" for those who may not know how to navigate Canada's complex systems.

This report by The Canadian Press was first published on July 19, 2020.