Inside the coronavirus data mess the Trump administration created 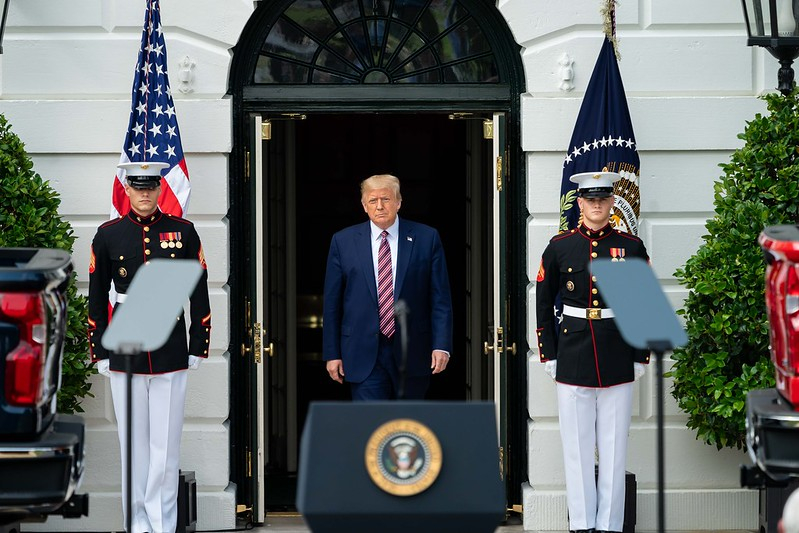 President Donald J. Trump walks from the White House to deliver remarks at the Rolling Back Regulations to Help All Americans event Thursday, July 16, 2020, on the South Lawn of the White House. Official White House Photo by Delano Scott/Public domain
Previous story

Earlier this week, critical data about the availability of ICU and hospital beds around the country vanished from the Centers for Disease Control and Prevention’s website. Independent researchers who rely on the data to track and forecast the toll of the virus no longer had quick access. Members of the public who wanted more information to make decisions about their lives ― whether to travel, send kids to camp or visit elderly relatives ― couldn’t find it.

The Trump administration claims the problem will be fixed and has insisted the goal of the change was to get more data, not less, out to the public. “It will continue to be public. It should be public,” White House press secretary Kayleigh McEnany said during a Thursday press conference.

But in the meantime, the administration rattled the medical community and showed how easily vital data can disappear. Trump and his team insist they are laser-focused on defeating the coronavirus, which they call the “invisible enemy.” But it’s become clear in recent weeks that the administration’s real fight is against the science and data that show the devastating consequences of the government’s bungled pandemic response.

On Tuesday, the Trump administration changed its coronavirus reporting rules to require hospitals to bypass the CDC and submit information directly to the Department of Health and Human Services, as The New York Times first reported. The following day, the hospital capacity maps on the CDC’s website were removed.

Many health experts responded with outrage, accusing the administration of suppressing the information for political purposes and further burdening already-strained hospitals.

“We’re in the middle of the worst pandemic in 100 years. More than 137,000 Americans have died,” tweeted Dr. Tom Frieden, the former director of the CDC. “Covid is exploding in Arizona, Texas, South Carolina, Florida, and other states. And the administration has chosen to sideline the CDC. Where did this data go?”

There are conflicting accounts surrounding the data’s disappearance. News outlets initially suggested that Trump’s administration had directed the CDC to wipe the figures from its website. In interviews with Politico, however, officials at HHS placed the blame squarely on the CDC itself: “No one came out of our conversations believing that CDC was going to stop doing analysis,” an anonymous HHS official with direct knowledge of the situation told the outlet. “All it did was feed into this narrative that we were cutting off the CDC when that’s not what happened at all.”

Such infighting and lack of coordination among the nation’s top public health organizations only threatens to exacerbate the deadliest pandemic in a century, experts say. It comes at a time when infections are surging across much of the country as Trump openly blasts the CDC’s safety public guidelines and the White House attacks the nation’s leading infectious disease expert, Dr. Anthony Fauci.

Doctors were blindsided by the missing data, according to Dr. Rob Davidson, a western Michigan emergency room physician and the executive director of the Committee to Protect Medicare.

Key data about hospital beds disappeared from the CDC website after the White House changed COVID-19 reporting rules, leaving the public in the dark.

“I was bewildered, but not surprised,” said Davidson, who went viral on Twitter earlier this year for confronting Vice President Mike Pence about the Trump administration’s planned health care cuts.

“It was frustrating that something as basic as data on hospitalizations and ICUs — two of the most critical metrics we use to allocate resources and [measure demand] — disappeared,” he added. “What we’ve seen with this administration is that they’re willing to politicize anything.”

The policy change also had an immediate impact on independent researchers who use the data to track and forecast the toll of the virus across the country. Nonprofit news site ProPublica used it for its tracker on states’ efforts to reopen their economies. A note on the site’s information about ICU beds now reads: “Data Is No Longer Being Released By The CDC.”

Another site that relied on the data is Covid Exit Strategy, which tracks each states’ progress toward reducing infections, as well as hospital readiness and testing capabilities. Ryan Panchadsaram, who helps run the site, told HuffPost that there’s a misconception that everything is now back to normal — despite reassurances from Pence and other members of the Trump administration that the government is providing “full transparency.”

Nearly a week’s worth of data on hospital capacity is still missing. While the CDC restored the dashboards that had been taken down, as of Friday afternoon, they had not been updated beyond July 14. The result, Panchadsaram said, is that researchers are unable to provide a full picture of how hospitals are faring during the crisis. More than 30 states are recording increases in cases, and the U.S. recorded a record 75,600 new infections on Thursday, according to a New York Times database.

It was frustrating that something as basic as data on hospitalizations and ICUs — two of the most critical metrics we use to allocate resources and [measure demand] — disappeared. What we’ve seen with this administration is that they’re willing to politicize anything.Dr. Rob Davidson, emergency room physician

Friedman, along with other former CDC directors Jeffrey Koplan, David Satcher and Richard Besser, warned of the consequences of politicizing the COVID-19 response in a sobering Washington Post op-ed earlier this week.

“Public health experts face two opponents: covid-19, but also political leaders and others attempting to undermine the Centers for Disease Control and Prevention,” they wrote. “We’re seeing the terrible effect of undermining the CDC play out in our population. Willful disregard for public health guidelines is, unsurprisingly, leading to a sharp rise in infections and deaths.”

HHS told CNBC on Thursday that it had directed the CDC to make the data public once again. Panchadsaram said that while that’s promising to hear, the major question is when.

“Every week that goes by with this indicator missing, it’s leaving us in the dark on a very critical measure that helps us understand truly how our health system is going to respond,” he said. “It shows how severe an outbreak is within a state, from the spread to the impact to the health system. It gives folks a view of what might happen in the week to come, two weeks to come. It’ll help folks prepare, but more than anything it will help people take it even more seriously.”

Panchadsaram said he does not believe the shift in policy was malicious but was rather intended to streamline data and make things easier on hospitals. The result, however, was that it kept key coronavirus data from the public. Panchadsaram hopes that HHS uses this as an opportunity to figure out how to share all of the data it has with the American public.

“Don’t just give us back these one to two indicators, share everything you’re seeing,” he said. “Put us on the same page as you.”

There is more the administration has opted to keep to itself as it pushes for schools and states to get back to normal. An internal White House document obtained by the Center for Public Integrity shows that 18 states are in the “red zone” for COVID-19 cases, with more than 100 per 100,000 people last week.

“It feels like there’s no limit to how much they will allow politics to enter public health,” Davidson said. “If data is being suppressed, it’s obviously not in the best interest of the public.”

Time, perhaps, for the

Time, perhaps, for the hospitals to engage in a little civil disobedience, perhaps reporting to both HHS and CDC at the same time?
If they all did it, who could he point retribution towards?