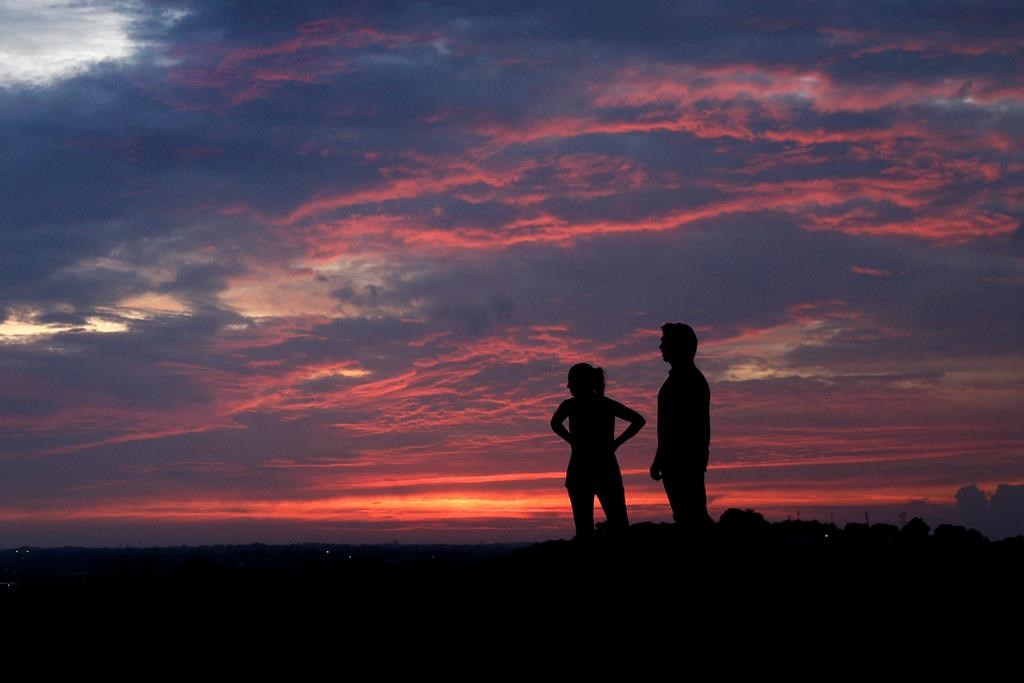 A couple watch the sunset from a park, on Friday, July 3, 2020, in Kansas City, Mo. File photo by The Associated Press/Charlie Riedel
Previous story
Next story

As the COVID-19 pandemic makes it harder for couples seeking a divorce to appear before a court, some family lawyers in Ontario say there may be more incentive for people to turn to alternative methods such as mediation.

Court operations, including divorce and other family matters, were largely put on hold in mid-March, with only emergency cases being heard.

In-person court appearances began to gradually resume earlier this month, and more matters are also being heard remotely, but experts say a backlog of cases will cause further delays for ongoing and new divorce proceedings.

At the same time, some family lawyers in the province say the demand for such services has not diminished during the pandemic — and some report it appears to have increased.

In Ottawa, a group of family lawyers launched the Virtual Family Law Project to help provide remote alternatives to the court system, such as mediation or arbitration by videoconference, during the health crisis.

Gerald Yemensky, one of the lawyers behind the project, says he hopes more people will consider these avenues even after the courts return to full operations.

"The court process is fundamentally necessary, particularly for the higher conflict situations," such as those involving domestic violence, Yemensky said.

"But for very many people, the court system is overkill. And mediation, collaborative family law, arbitration on specific issues can be far more effective. But it takes one element, and that element is that the parties want to resolve these issues."

Separation agreements reached through mediation or a combination of mediation and arbitration are enforceable by the courts, and decisions made by an arbitrator are binding, Yemensky said.

"All of these things can be done ... in a virtual process where it's appropriate," he said.

In cases where it's a good fit, private resolution is likely to become more appealing in light of the court backlog, said Diana Isaac, a family lawyer and partner with the Toronto firm Shulman & Partners.

As the COVID-19 pandemic makes it harder for couples seeking a divorce to appear before a court, some family lawyers in Ontario say there may be more incentive for people to turn to alternative methods such as mediation.

Going to court can be more expensive than mediation, and more stressful, given that a decision is imposed rather than reaching a mutually acceptable agreement, she said.

The pandemic has already created difficult conditions that contribute to stress and test many relationships, said Isaac, whose firm has seen a 40 per cent surge in inquiries related to separation during the crisis. Most of those people have then moved ahead with the process, she said.

Having both spouses at home around the clock and possibly working there "acts as a catalyst for situations which were on the cusp of separation, or there was resentment pre-COVID," she said.

"But you also get these newfound, 'I didn't know that we would never get along until we were confined in this space,' so you get a mixture," she said. "But I don't think these conditions are making it easier for anyone."

Russell Alexander, whose family law firm has offices in several cities including Toronto and Oshawa, said the province's efforts to modernize the justice system during the pandemic will help when it comes to tackling the backlog of cases, but "it's probably going to be 18 months to two years before it returns to anything close to normal."

Still, people will continue to be able to get divorces, said Alexander, whose upcoming book on divorce includes a chapter on the impact of COVID-19 on the process.

"We're still processing divorces and we're still going through the process, we're just doing it in a different way," he said.

This report by The Canadian Press was first published on July 26, 2020.