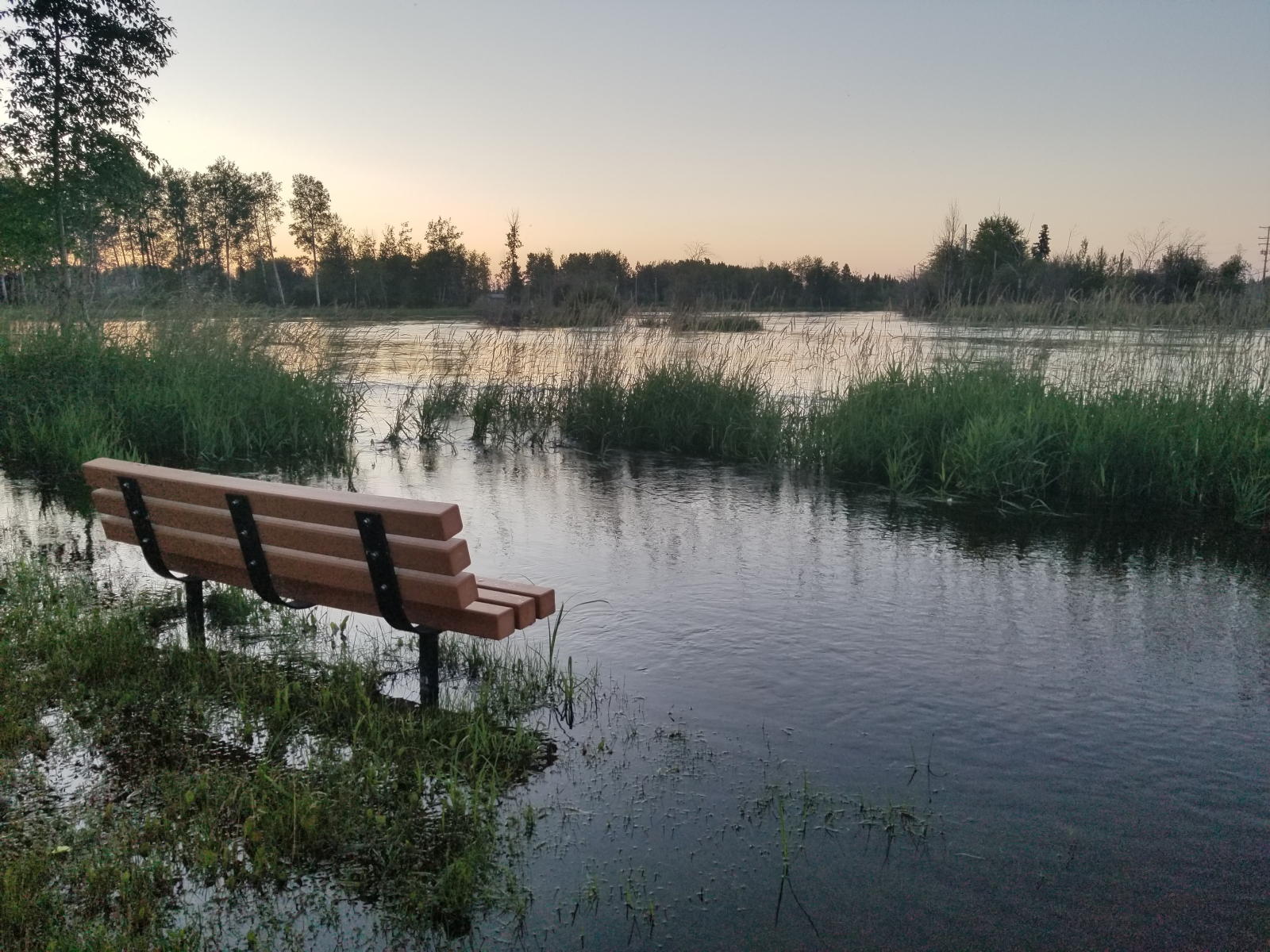 A park bench near where the Montreal River meets Lac La Ronge. If the La Ronge dam breaks, water will rise in already flooded rivers in the Churchill River Basin as the lake empties. Photograph by Michael Bramadat-Willcock.
Previous story

The La Ronge Dam was moved from a hazardous condition to a potential dam failure classification Wednesday as water levels continue to rise in the Churchill River Basin, according to Saskatchewan’s Water Security Agency.

"It's getting to the point where we’re concerned," agency spokesperson Patrick Boyle told Canada’s National Observer. 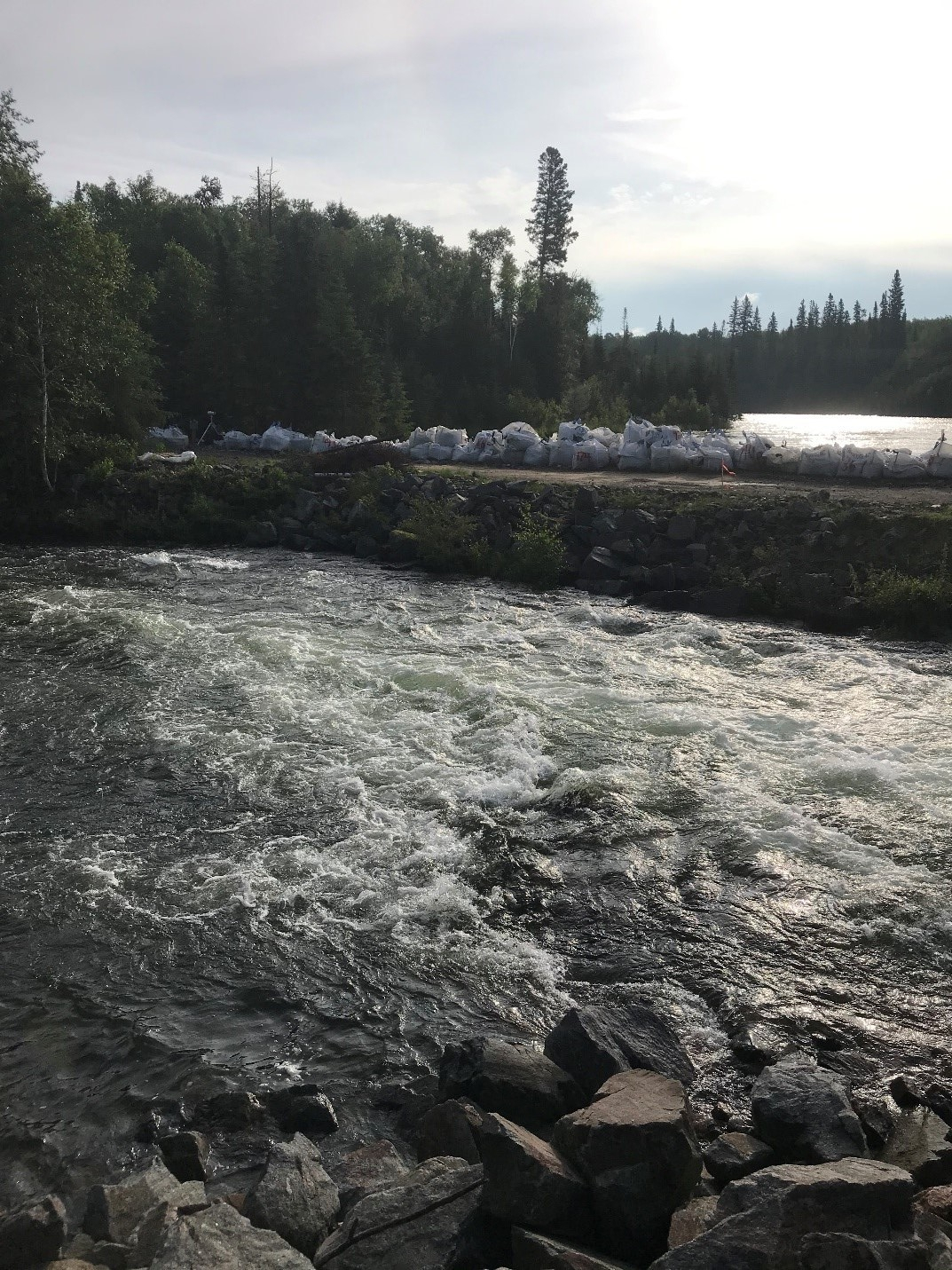 Boyle said roughly 500 sandbags are being moved to secure the site, which is upstream from the northern community of Stanley Mission.

“It would result in more flooding on top of flooding. The other impact would be we would lose the ability to manage the lake level and keep it at a certain range that the community and everyone would be used to,” Boyle said.

Boyle said this classification is not a common occurrence at the dam site or in most areas of the province.

This is a result of rainfall in the area recently, including high accumulations on July 25 and July 26. The lake level at Lac La Ronge is forecasted to increase by 10 centimetres.

Boyle stressed the dam is not in imminent danger of failing, but levels are encroaching on the distance between the water and the top of the dam.

Boyle said a dam failure would increase flows in an already flooding region and would push water levels above the record by the time it peaks in late August.

“It would result in more flooding on top of flooding. The other impact would be we would lose the ability to manage the lake level and keep it at a certain range that the community and everyone would be used to,” Patrick Boyle.

“We have some mitigation measures in place with sandbags and things that have raised (the height of the dam) up 0.5 metres. We still have some room there and there are protections in place," Boyle said.

“With this rainfall amount that came to the area, we’re going to see that rise get up to probably where the top of the original dam would be,” Boyle said.

He said communities that are affected, such as Stanley Mission, still have time to prepare as the situation develops.

The agency classifies dams having low, significant, high, very high, or extreme consequence on the surrounding area based on the estimated results of dam failure as it relates to loss of life, environmental and cultural impacts, economic damages, and restoration costs. La Ronge Dam is classified as “significant.”

“We don’t want to cause mass panic," Boyle said. "But we’re also trying to ensure that everyone has the most up to date information and knows exactly what the situation is.”

He said the situation is serious, but not imminent and a potential collapse of the dam would likely be a few weeks out, when water levels peak in August.

The agency is assessing what additional mitigation measures can be used, such as adding more material to the dam.

Monitoring will be increased from weekly to daily.

“We have cameras on the structure all the time. We’re always looking at satellite images, and staff are on site, have been and will be daily going forward,” Boyle said.

As of Wednesday, the biggest impact downstream of a failure of the dam is thought to be an increased outflow from the lake into the Churchill River system, which is already experiencing floods.

“The dam itself is rock with a silt sand core and then there’s a gate that we manage the flows with. So if it was to go, then it’s basically like pulling the plug on a sink and the water comes out," Boyle said.

“The water would go downstream. It’s not a wave of water, it would be a constant flow.”

This could increase flood peaks and impact communities as far away as Sandy Bay.

More analysis is being done to understand what the impact on current downstream water flows would be if the dam were to fail.

“We’re still doing some modelling … we know it will add some water, so there is going to be some sort of impact, but we don’t know what that means as far as the community,” Boyle said.

He said collecting information on water levels in the northeast region has been challenging.

“It’s not an area where we have a huge amount of data either, and getting in to get measurements is difficult. We’re looking at all these things right now.”

The forecast for the next week is hot and dry in the area. Boyle said that could help with evaporation on the lake, “but we’re still going to see that increase (in water levels).

It’s certainly something we’re taking seriously and trying to ensure that everyone understands what stage we’re at.”

For non-residents, only the

For non-residents, only the park bench shows flooding. We need before and after pictures.