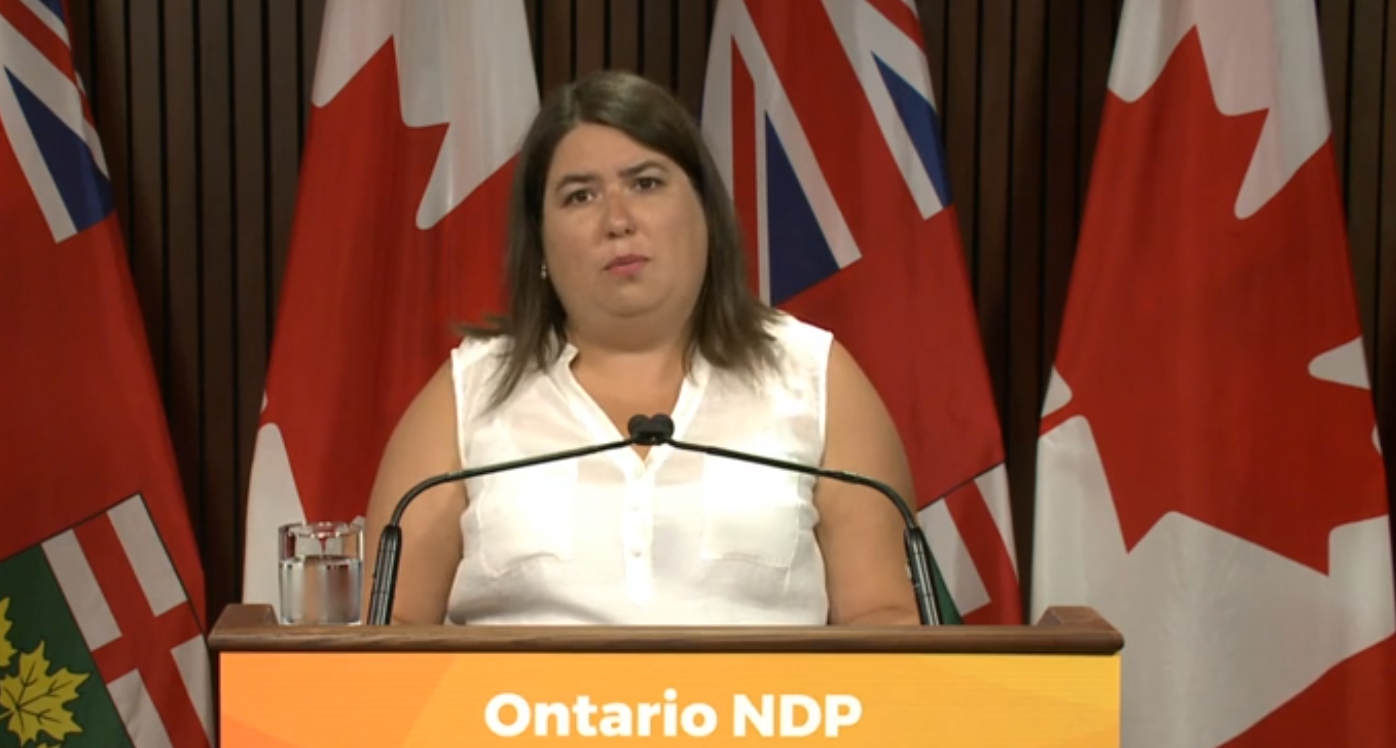 Suze Morrison, the Ontario NDP's critic for tenant rights, pleads with the Ford government to extend an eviction moratorium on July 31, 2020. Screengrab from NDP supplied video
Previous story
Next story

The Ontario NDP pleaded Friday for the Ford government to extend a pandemic-related ban on rental evictions that is due to expire on the weekend as critics fear a looming expansion of Toronto’s housing crisis.

Advocates warn lifting the moratorium on hearings at the Landlord and Tenant Board (LTB) will lead to a massive wave of evictions and allow developers and corporate landlords to hike rental rates — especially in Toronto where demand is strong and supply is tight — after Ford previously removed rent control on vacated sites.

It won’t be quite as quick as Morrison suggests; eviction orders that were in process before the pandemic will now be acted on, and non-urgent eviction hearings will start in mid-August, Tribunals Ontario said this week.

But whether it is tomorrow or some time in August, the body responsible for ordering a sheriff to remove someone’s belongings from their home in Ontario will soon be considering the cases of tens of thousands of people who lost work when COVID-19 shuttered the economy.

“People who have never missed a rent payment or car payment in their entire lives are now terrified of being evicted,” Morrison said.

The province has not offered renters any specific assistance since March, when restrictions on social interactions led to the loss of large numbers of retail and hospitality jobs, and the federal assistance available does not cover an average Toronto rent.

Younger renters are particularly vulnerable to eviction given many are employed in precarious or part-time work that has been lost to the pandemic and related shutdowns.

“It's the responsibility of the province to step up and make sure that folks are able to stay housed... and instead the premier rolled out an eviction bill to make it easier for landlords to throw people out on the streets,” Morrison said.

Morrison is referring to Bill 184, a housing bill that Ford and his government introduced to the legislature near the start of the pandemic and toughened along the way. She and other critics say the bill makes it easier for landlords to bully tenants into signing bad repayment plans during the pandemic and then evict them without a hearing.

Spokespeople for the premier and Housing Minister Steve Clark did not respond when asked if they would extend the moratorium or put a direct support plan in place for renters unable to make full payments because COVID-19 stripped them of income.

Geordie Dent, the executive director of the Federation of Metro Tenants’ Association, said tenant advocates were fighting to slow the process and protect renters' rights on a number of fronts.

He said some were pushing the attorney general’s office to create guidelines for the LTB to follow, and others were focused on efforts to convince Toronto’s mayor to use emergency powers to stay evictions in the city.

The City of Toronto voted on Wednesday to challenge Bill 184, arguing that it breaches rules around “procedural fairness and natural justice.”

“We're mostly trying to push the government on financial support, or to mimic B.C.'s plan to mandate long repayment plans for a year,” Dent said.

British Columbia has been providing rental relief of between $300 to $500 a month directly to landlords and is requiring landlords work out rent repayment agreements that span a reasonable period of time.

The Landlord and Tenant Board is gradually resuming services in August, Tribunals Ontario said in an emailed response to questions.

Tribunals Ontario said on Thursday that the LTB would begin issuing pending eviction orders starting Aug. 1, and begin to schedule hearings for non-urgent evictions for mid-August and into the fall.

Spokesperson Rebecca Ganesathas was not immediately able to say how many L1 (non-payment of rent) eviction applications the board had received since the moratorium.

In April, the last month the LTB had provided data, the board had received 1,405 such applications. That was down from the roughly 2,500 to 3,000 range seen in the previous two months and the equivalent three-month period a year ago.