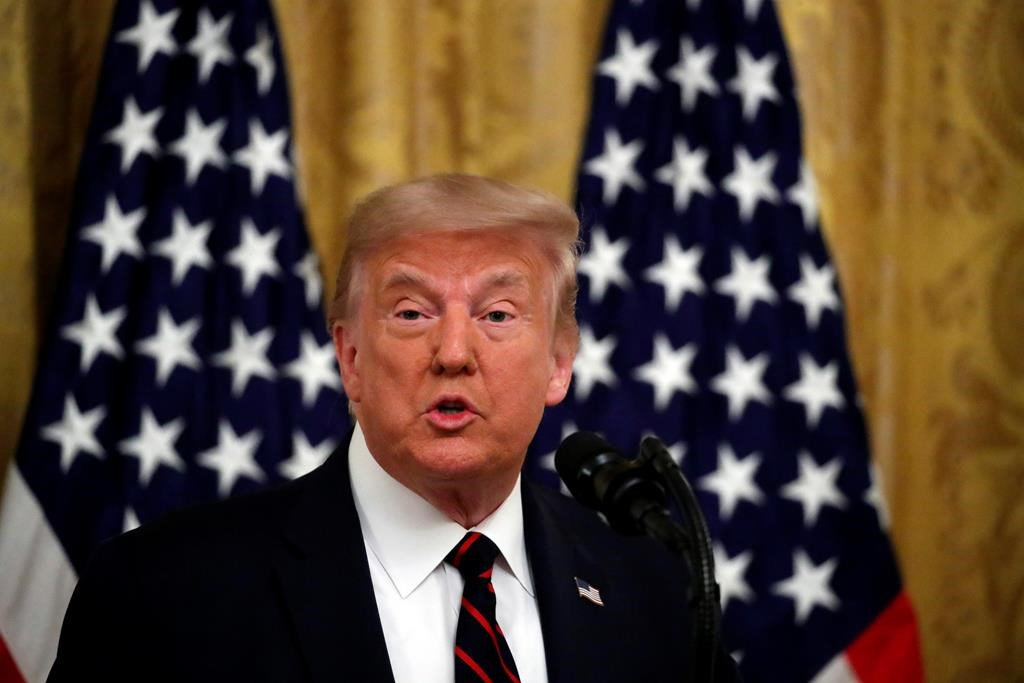 President Donald Trump speaks during a signing ceremony for H.R. 1957 – "The Great American Outdoors Act," in the East Room of the White House, on Tuesday, Aug. 4, 2020, in Washington. File photo by The Associated Press/Alex Brandon
Previous story
Next story

The potential sale of social-media platform TikTok to Microsoft is leaving Canada with a sense of deja vu.

Experts say the country is once again being pressured to take sides in a debate about digital technology that seems driven more by politics than by policy.

Microsoft has emerged as a potential buyer for the popular video-sharing app, seeking to acquire its presence in the United States, New Zealand, Australia and Canada.

Michael Geist, an expert in internet law at the University of Ottawa, says the issue feels like a replay of the debate over whether to allow Huawei technology into Canada's 5G wireless data networks.

The federal government still hasn't ended that debate with a decision, while Huawei executive Meng Wanzhou awaits possible extradition to the United States after being arrested in Vancouver and two Canadians, Michael Kovrig and Michael Spavor, have been detained in China for more than 600 days.

Geist says Canada is once again uncomfortably pressured to take sides in an emerging global digital tech battle and may try to not get too involved in the TikTok talks.

"At this stage, I'm not convinced that the Canadian government has clear policy on the area," Geist said, "meaning our likely response is to stay on the sidelines and let the issue unfold without much input or engagement."

A report earlier this year from We Are Social, a global agency that tracks social-media use, found that TikTok was the sixth most-downloaded app in Canada in 2019, but used by only nine per cent of Canadian internet users aged 16 to 64.

The potential sale of social-media platform TikTok to Microsoft is leaving Canada with a sense of deja vu.

Trump has framed his concerns around a Chinese company having access to Americans' personal data, echoing concerns that earlier this year led a Chinese gaming company to sell Grindr, a gay dating app, to an American company for over US$600 million.

Trump's push comes amid escalating rhetoric towards Beijing over trade and the novel coronavirus pandemic.

"The recent TikTok developments in the U.S. appear to be driven far more by politics than policy," Geist said. "There is little difference in the data collection practices of TikTok and the large U.S. social-media companies."

A decision late last month from the Court of Justice of the European Union highlighted what it saw as the inadequacy of U.S. privacy laws, saying the U.S. government could have unchecked access to user information through its own surveillance laws.

So while bringing TikTok's user data to U.S. servers might alleviate concerns about Chinese spying, it doesn't eliminate concerns of U.S. agencies doing the same to an American-owned platform.

"When Europe passed the strongest privacy regulation in the world, Microsoft decided to offer those protections and rights to everyone — even though they weren't required to by law," said Lauren Reid, president of privacy consultancy The Privacy Pro.

"At the end of the day, Microsoft is a U.S. company and is subject to the U.S. government surveillance programs, which allow unchecked access to the personal information held by private companies."

On Monday, Trump told reporters he would ban TikTok in the U.S. unless Microsoft or another American company bought the app by Sept. 15, with a portion of the sale going to the U.S. treasury.

Christopher Parsons, a senior research associate at the University of Toronto's Citizen Lab, said Trump's actions to force a sale would be a fairly substantive break with the way governments ordinarily treat internet companies.

In effect, the president's actions suggest that each country should have its own branches of social media companies, Parsons said.

A question for Canadian policy-makers is what they would do if a country demanded part of a domestic tech darling — Parsons used Ottawa-based Shopify as an example — be hived off for similar reasons Trump has for TikTok.

"If Canada were to be involved, I think that it may be less around concerns about there being two TikToks ... and more around are these the kinds of norms we want to be propagated," he said.

As a subscriber, I want to

As a subscriber, I want to voice that this article was a waste of time to read. The headline of this article is misleading - the article itself reveals that Canada is not involved in this sale at all. Furthermore, while Geist is a respected expert in e-commerce issues, his comment about there being little difference between China's privacy policies and that of the US is framed in such a way to leave the reader believing that is the end of the issue. However, it is very obvious that the Chinese government does not respect human rights (most recently in the extradition and dissent policies enacted for Hong Kong in July), executes mass censorship (Great Firewall of China), and uses it's advanced public surveillance to silence 'dissenters'. At what point to we hold China accountable for its egregious abuse of human rights? I don't think it does anyone any good to minimize China's abuses of human rights, nor their record of unscrupulous business policies. Please do not waste our time with articles like that that deliver little information while actually obscuring the issues that most desperately require investigation and public discussion (Canada's relationship with and policies regarding China).