By Adina Bresge | News, Politics
#827 of 1611 articles from the Special Report: Coronavirus in Canada 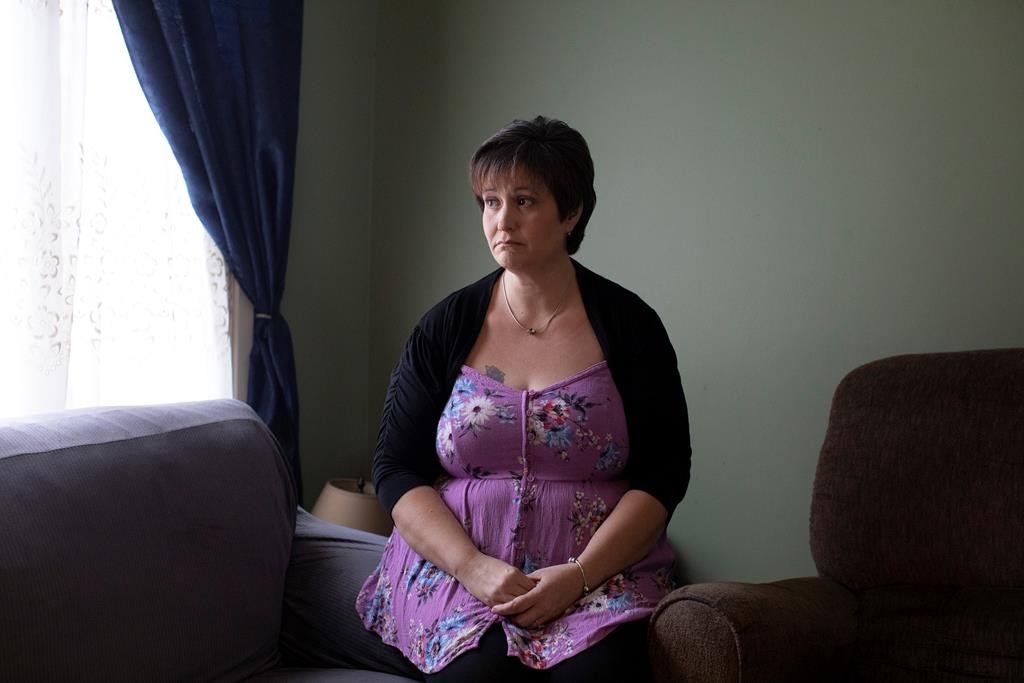 Karyn Keith, who receives CPP disabilities benefits, poses for a portrait in her home in Brampton, Ont., on Monday, January 27, 2020. File photo by The Canadian Press/Chris Young
Previous story
Next story

Karyn Keith says she isn't asking for much. All she wants is the same support she'd receive if she was out of a job because of the pandemic, rather than unable to work because of her disabilities.

The 44-year-old mother in Brampton, Ont., said she lives with constant pain and fatigue from multiple chronic conditions, including trigeminal neuralgia, a debilitating nerve disorder characterized by searing spasms through the face.

She was forced to leave her career in supply chain and logistics management in 2013 when her health deteriorated after the birth of her daughter. Since then, she's received $1,150, plus $250 for her child, every month in federal disability benefits based on her contributions to the Canada Pension Plan.

Even with her husband's income as a mechanic, Keith said most of her family's spending is geared towards "survival."

Still, some essentials fall through the cracks.

There's a molding hole in her ceiling that's needed repair since 2014. Her husband's teeth are breaking because they can't afford to fill his cavities. Every month, they have to dip into their dwindling savings to pay the bills.

Now, with the added financial strains of COVID-19, Keith says she's doesn't know what else they can live without. "We're on the precipice, and literally, it's going to take one thing to kick us off the edge."

Keith says these shortcomings have become starker as the federal government doles out $2,000 a month to millions of out-of-work Canadians under the Canadian Emergency Response Benefit, while she's supposed to make ends meet on a little more than half that amount.

"If people who work need this money to survive on, what about people who can't?" Keith said. "Don't we deserve a standard of living?"

Many advocates point to CERB as a concession that Canada's disability assistance rates have failed to keep up with the costs of living in much of the country, and in some places, fallen below the poverty line.

Karyn Keith says she isn't asking for much. All she wants is the same support she'd receive if she was out of a job because of the pandemic, rather than unable to work because of her disabilities.

But for a number of Canadians on disability assistance, CERB has also come to symbolize the extent to which their lives are devalued, even during a pandemic that puts them at disproportionate physical and financial risk.

"For some, it's just reinforced the profound sense of cynicism of how they've been treated for much of their life by the government," said Michael Prince, a professor of social policy at University of Victoria.

Prince said COVID-19 presents a case study in the pitfalls of Canada's motley patchwork of disability income programs, and a model for how a unified nation-wide support system like CERB could fill these holes in the social safety net.

Shortly after the pandemic hit, Ottawa rolled out the $82-million emergency benefits package to offer workers who lost their jobs $500 a week.

The government's latest figures show $62.75 billion in benefits have been paid to 8.46 million people. Last Friday, federal officials announced that CERB will wind down in coming weeks as the government shifts many people over to a revamped employment insurance system.

Prince said the speed and simplicity of CERB marked a bitter contrast for many disability assistance recipients who must navigate a Byzantine set of eligibility requirements and rate calculations before their benefits kick in.

In late July, Parliament approved a one-time $600 payment for people with disabilities facing additional expenses during COVID-19, including the increased costs of food, medication, support workers and personal protective equipment.

Prince commended the government for including an estimated 1.7 million Canadians across a range of disability support programs, and giving people 60 days to apply for the disability tax credit, which would qualify them for the one-time payment.

Unlike CERB, the payment is tax-free and non-reportable, Prince noted, so it won't be subject to clawbacks or offsets at the provincial level.

Minister of Employment, Workforce Development and Disability Inclusion Carla Qualtrough said in a statement that the government remains committed to a "disability inclusive" pandemic response.

But Prince hopes this resolve will extend beyond the immediate crisis to address the long-standing lapses in the system that have forced so many Canadians with disabilities to live in poverty.

Andrea Hatala, recipient co-chair of the ODSP Action Coalition, said the discrepancies between provincial support rates and CERB have galvanized calls to make $2,000 a month the new standard for disability assistance.

"Now we have more of a basis for what adequacy is," she said.

Under normal circumstances, Hatala said the Ontario Disability Support Program's maximum individual rate of $1,169 a month leaves many people without secure access to food, shelter and other basics such as winter clothing.

Many people with disabilities have compromised immune systems, she said, so they face a higher risk of COVID-19 complications, and extra expenses to keep themselves safe.

The pandemic has restricted several services that low-income people rely on, such as food banks and public transit, Hatala said. In addition to retail markups on groceries and other goods, she said the high costs of delivery and private transportation have pushed many to their financial limits.

"There has been more light shining on these things," noted Hatala.

"It doesn't just happen magically. People have to try to make society better."

In 2017, more than a quarter of Canadian adults with disabilities — or 1.6 million people — said they couldn't afford a required aid, device or prescription medication, according to Statistics Canada.

The study also found that 28 per cent of people with severe disabilities aged 25 to 64 live below Canada's official poverty line, compared to 10 per cent of their counterparts without disabilities.

In a report on welfare incomes in Canada in 2018, the anti-poverty foundation Maytree found that annual incomes for individuals on standard disability assistance ranged from $9,800 and $12,500 in most provinces. Ontario had the highest rate at $14,954, followed by British Columbia at $14,802 and Quebec at $13,651.

At these levels, the organization says many provincial programs don't cover the costs of living in their biggest cities.

According to the government's "market basket measure," the poverty threshold for a single person in Calgary was $20,585 in 2018 — double Alberta's standard disability rate of $10,301. Even at the higher end of the spectrum, B.C.'s support payments fall $5,882 short of the $20,684 poverty threshold in Vancouver.

Vancouver activist romham gallacher, who spells their name with lower-case letters, is part of the grassroots group called 300ToLive that's pushing B.C. to extend its $300 supplement to disability assistance beyond the COVID-19 crisis as part of a broader effort to bring benefits in line with basic standard of living.

Even as the pandemic has exacerbated the desperate circumstances for many on disability assistance, gallacher said the $300 supplement has shown how a modest increase can have momentous impacts on people's quality of life.

In an informal survey of 285 people who received the supplement, 300ToLive found that the overwhelming majority of respondents said they spent the money on healthy food.

Gallacher was particularly touched by one woman who said the supplement ensured that she didn't have to choose between paying rent and feeding her one-year-old daughter, and even buy a new bedsheet and underwear for the first time in years.

A spokeswoman for B.C.'s Ministry of Social Development and Poverty Reduction said the supplement, which is due to expire after this month's cheque, is an "extraordinary measure" meant to relieve the compounded pressures on assistance recipients who already live in poverty.

But gallacher said the government's insufficient supports betray its indifference towards the plight of people with disabilities.

"It says what much of society says: that our lives and contributions aren't as important, we're disposable," gallacher, who has a hearing condition, said by email.

"The federal government decided that $2,000 was the amount per month that folks across the country needed to live during this pandemic, so why are we still being forced to live well below that, while often having significant expenses? Do our lives count for less?"