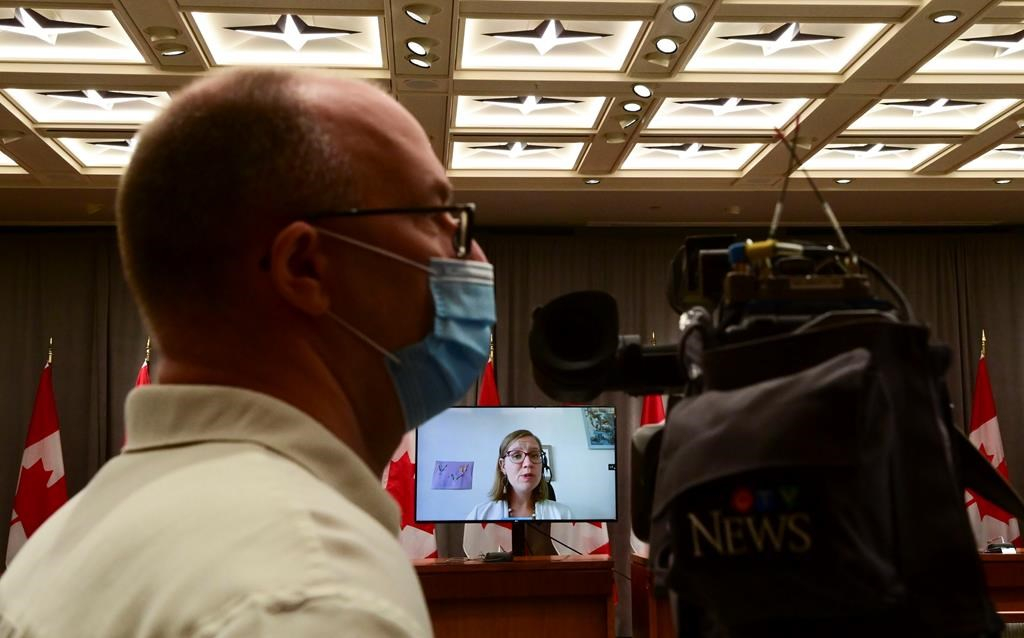 Karina Gould, Minister of International Development, holds a press conference via videoconference on Parliament Hill in Ottawa on Aug. 6, 2020, regarding Canada’s humanitarian aid to Lebanon following the explosion in Beirut. Photo by The Canadian Press
Previous story
Next story

The federal government will match all individual donations from Canadians to humanitarian relief efforts in Lebanon following this week's deadly explosion in Beirut.

International Development Minister Karina Gould says Canadians can help the Lebanese people who have lost loved ones, been injured or lost homes from the explosion by giving generously.

"Concerted humanitarian action is required to meet the immediate needs of people impacted by the blast, including health care food, shelter and water," she said.

"My message to Canadians is this: the best way that you can help is to donate money, and for your contribution to be matched by the government of Canada, donations must be made to the humanitarian coalition or one of its partners."

Donations made by Canadians before Aug. 24 to the Humanitarian Coalition — a group of 12 established aid organizations working on the ground in Lebanon — or to one of the coalition's members will be matched by the federal government, up to a maximum of $2 million.

This matching fund is part of $5 million in emergency aid pledged by Ottawa earlier this week after Tuesday's blast in Lebanon's capital. Another $1.5 million of aid has been earmarked for the Lebanese Red Cross.

Canada is directing all of its aid for this crisis directly to humanitarian organizations, not the Lebanese government, to ensure the assistance goes to those in need, Gould said.

"What we are focused on right now is responding to the emergency at hand, working through trusted NGOs and international partners that are operating on the ground to make sure that we're getting the assistance to the Lebanese people in need, the most vulnerable, so that we can save lives, so that we can protect the vulnerable and make sure that we are helping them get through this crisis as fast as possible."

Earlier this week, Gould told reporters any direct aid to the government of Lebanon would only come with "significant fiscal and political reforms" in light of widespread domestic and international concerns about corruption and poor governance in the country.

The country is led by a political ruling class, made up mostly of former civil war-era leaders, and it is now being blamed for incompetence and mismanagement that contributed to Tuesday’s explosion.

This has sparked protests of anger, which led to clashes between security forces and demonstrators Saturday in central Beirut.

The federal government will match all individual donations from Canadians to humanitarian relief efforts in Lebanon following this week's deadly explosion in Beirut.

The blast is believed to have happened when a fire touched off a stockpile of 2,750 tons of highly explosive ammonium nitrate that authorities left sitting in a warehouse for years - despite years of repeated warnings from officials that it posed a danger.

The Aug. 4 explosion has left at least 150 people dead, and thousands injured. More than 300,000 people have lost their homes.

Bill Chambers, president and CEO of Save the Children, one of the Humanitarian Coalition's member organizations, says he hopes Canada's matching fund program will encourage Canadians to seize the opportunity to double the size of their donations.

"This horrific incident could not have occurred at a worse time and has hit communities that were already suffering from the impact of COVID-19 and the economic deterioration in Lebanon," he said.

"Over 100,000 children are now homeless and in need of immediate care."

Even before the explosion, thousands of people were struggling to feed themselves and their families due to an economic and financial crisis in the country. The explosion has only worsened the situation on the ground for the most vulnerable, Chambers said.

"What is needed in the immediate emergency to keep these people alive is funds, dollars that can be, first of all, matched by the Canadian government and can be put to the most urgent needs in the moment, on the ground," he said.

Gould says Canada has so far received 64 requests for assistance from Canadians in Lebanon, but due to privacy concerns she could not share details except that these requests have included inquiries about consular support.

"Canadian-based and locally engaged staff in Beirut are regrouping and the embassy will be open again on Monday, Aug. 10," Gould said.

This report by The Canadian Press was first published Aug. 8, 2020