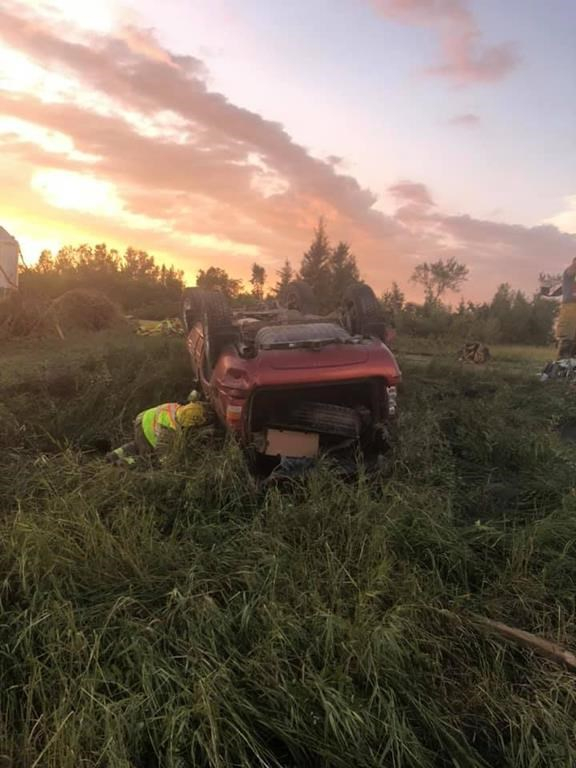 A first responder checks on an overturned vehicle at the scene where a tornado touched down, uprooting trees and overturning two vehicles near Virden, Man., in a Fri. Aug. 7, 2020, handout photo published to social media by The Wallace District Fire Dept.
Previous story
Next story

A tornado that killed two teens when it threw their vehicle more than a kilometre into a Manitoba farm field surprised even those in the area who are accustomed to violent weather, as well as a stormchaser, with its destructive strength.

"A lot of people just can't comprehend how wind can pick up a piece of machinery in a yard that weighs thousands of pounds and throw it half a mile across the highway onto another piece of property," said Murray Wright, mayor of Virden, after visiting the farm where the twister touched down south of the community on Friday night.

"It's a terrible thing."

Police said they arrived at the farm near Highway 83 south of Virden shortly after 8 p.m., local time. They said the property was extensively damaged and two vehicles had been thrown into a nearby field.

A search of the first vehicle, found closer to the highway, located a 54-year-old man from the Sioux Valley Dakota First Nation, who was taken to hospital with serious but non-life threatening injuries.

But officers located the second vehicle over a kilometre away, and they along with other first responders found a man and a woman, who were both 18 and from Melita, Man.

Police believed the pair were ejected from their vehicle, and they were pronounced dead at the scene.

Officers along with EMS continued to search the area for other possible victims but none were located.

Misheyla Iwasiuk, a local storm chaser, said it was the biggest storm she's seen in her life.

"It was a pretty bad scene ... This storm was large, very violent and it wasn't anticipated," she said. "We were assisting a gentleman whose vehicle unfortunately was flipped over and he was trapped inside of it."

A tornado that killed two teens when it threw their vehicle more than a kilometre into a Manitoba farm field surprised even those in the area who are accustomed to violent weather, as well as a stormchaser, with its destructive strength.

She said multiple people stopped to help before emergency crews arrived and extracted the man from the car, which landed on top of downed power lines.

Iwasiuk said farm buildings in the area took extensive damage after taking a direct hit from the storm. She also said emergency responders were assisting people in the fields who were hit by the storm while in farm equipment.

The Wallace District Fire Department noted in a Facebook post that there were no injuries to anyone in the farmyard.

The government agency said a damage survey will be completed Saturday with the help of a team from the University of Manitoba.

"There's still people in the field and they're still doing an assessment," Pederson said, noting that anyone with video or information about damage from the storm should reach out to Environment Canada.

In 2018, a 77-year-old man was killed when a powerful tornado touched down in Alonsa, west of Lake Manitoba, lifting several homes off their foundations and sweeping one vehicle into the lake. The RCMP said the man was found dead outside what remained of his wrecked home.

That tornado was estimated to have had wind speeds up to 280 km/h. Trailers in a campground disappeared, presumably into nearby Lake Manitoba.

Wright, meanwhile, said dozens of people came out to help clean up the area near Virden on Saturday, using machinery to move broken trees and grain bins scattered across the ground. Those who couldn't help with the physical labour were providing food to the workers.

"With a farming community everybody helps out in a time of tragedy. This is what's going on today," he said.

The majority of people also have their power back on after Manitoba Hydro crews worked around the clock, the mayor said. The debris will be cleaned in the coming days.

This report by The Canadian Press was first published Aug. 8, 2020.

—By Kelly Geraldine Malone in Winnipeg, Salmaan Farooqui in Toronto and Rob Drinkwater in Edmonton