Feds to join assessment of Teck coal mine expansion in B.C. 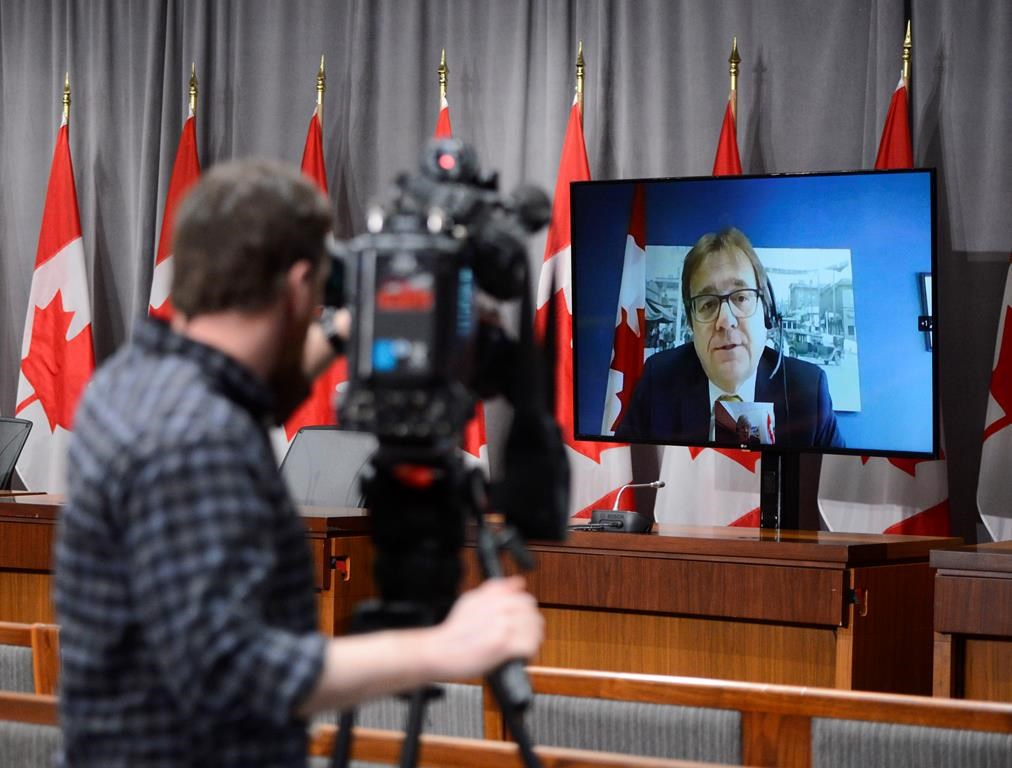 Minister of Environment and Climate Change Jonathan Wilkinson speaks via video link during a press conference on Parliament Hill in Ottawa on May 14, 2020. File photo by The Canadian Press/Sean Kilpatrick
Previous story
Next story

The federal government will join an environmental assessment of a major expansion to a proposed southern British Columbia coal mine.

"The potential for adverse effects ... may not be mitigated through project design, the application of standard mitigation measures, or through existing legislative mechanisms," says an analysis from the Impact Assessment Agency of Canada.

He had already reversed an earlier ruling and announced that Ottawa would take part in a review of the proposed Vista coal project in Alberta. Several other companies have made known their plans to mine coal in that province.

Teck is planning an expansion to its network of coal mines in the Elk Valley area of southeastern B.C. The Castle project would increase the area being mined by about one-third and allow the company to maintain production of steel-making coal at 27,400 tonnes a day.

The review involves fisheries, First Nations and international relations — all areas of federal jurisdiction. The mine expansion would also produce significantly more coal than the threshold required for a federal review.

"The Castle project has already been proceeding through a rigorous provincial environmental review process," he said in a statement.

"We will work with the B.C. Environmental Assessment Office and the Impact Assessment Agency of Canada to ensure a co-ordinated review and seek to avoid duplication."

Wilkinson was not available for an interview.

The federal government will join an environmental assessment of a major expansion to a proposed southern British Columbia coal mine.

"I appreciate that they understand and have committed to working within provincial timelines while they review matters of federal jurisdiction, such as trans-border issues," he said in an email.

Lars Sander-Green of Wildsight, one of the groups that asked for a federal assessment, thanked Wilkinson for the decision.

"If Teck can’t show how they can reduce selenium pollution downstream of their mines in the long term ... then no reasonable environmental assessment should approve this mine,” he wrote.

The decision also has implications for Alberta, where the government has said it hopes to increase the province's production of steel-making coal.

"The federal process is a more open, accessible process" — especially compared with Alberta's, he said.

Urquhart said Ottawa had little choice but to step in.

Teck's Pederson said the Castle project is "part of the existing Fording River operations and is necessary to maintain the associated jobs and economic activity."

The company's existing mines in the area are responsible for significant problems with selenium, an element toxic in large amounts. Reports on concentrations in area waterways show levels up to four times B.C.'s maximum for drinking water. Monitoring stations near the mines have reported levels 50 times what's recommended for aquatic health.

Teck's own research has reported the near-disappearance of rare cutthroat trout from a 60-kilometre stretch of the Fording River downstream from the company's four mines.

That water flows into the cross-border Koocanusa Reservoir. The reservoir drains into the Kootenai River, which flows about 200 kilometres across Montana and Idaho.

That contamination was a main concern of eight interveners who asked Ottawa to assist British Columbia in reviewing the expansion.

Those interveners included five First Nations on both sides of the border, 34 environmental organizations and the U.S. Environmental Protection Agency.

"Direct and cumulative impacts from coal mining in the Elk Valley have resulted documented impacts to Lake Koocanusa and the Kootenai River water quality, fish and fish habitat in the U.S," says the protection agency's submission.

Urquhart suggests Wilkinson's Teck and Vista decisions are a warning to the Alberta government, which recently revoked a decades-old policy restricting coal development in the province's foothills and mountains.

"The issue this creates for Alberta is just how difficult it is, even with changes to the coal policy, to have as much control over coal development as (cabinet ministers) would like the province to have."

This report by The Canadian Press was first published Aug. 19, 2020

On a climate scale of 10, thermal coal is right at the top with metallurgical coal only slightly less egregious at ~7.5. There is no longer any justification for burning thermal coal to generate electricity anywhere on the planet given the cost effective, clean renewable alternatives. To continue to do so is merely a bottom line, ideological decision.

However, steel is a vital material. Having acknowledged the great utility of steel, anthracite should now be classified as nothing less than a temporary transition fuel and source of carbon for steel making until emerging low emission metallurgical technologies are developed to maturity, hopefully catalyzed as a climate change mitigation priority.

One such process uses electrolysis with zero emission electricity in place of combustion in a furnace. MIT, under the direction of Canadian scientist Dr. Donald Sadoway, has developed this technology in a high-temperature furnace located in their lab. They went on to form a company named Boston Steel to market this tech. The team also developed a high-capacity, scalable and long-lasting liquid metal battery using common, cheap materials, a marriage made in heaven for intermittent wind, solar and tidal power. This group is clearly on the leading edge and should be given priority funding and field test opportunities by governments and the private sector.

So, how about it Mr. Wilkinson? Will the federal government not only give the coal expansion projects a serious environmental review that places climate change at the top of the list, but also use the rumoured upcoming green pandemic recovery response to put very promising technological projects and job creation strategies like these near the front of the line, right after transit, conservation and renewable energy?