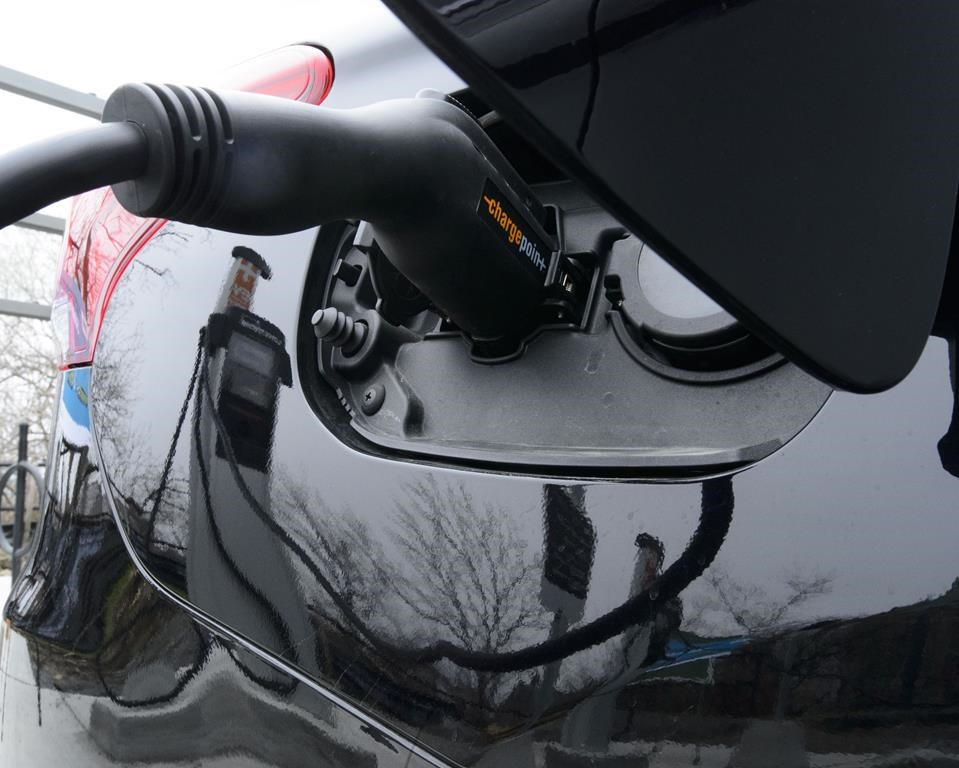 A car is charged at a charge station for electric vehicles on Parliament Hill in Ottawa on Wednesday, May 1, 2019. File photo by The Canadian Press/Sean Kilpatrick
Previous story
Next story

Transport Canada data obtained by The Canadian Press this week shows 75 per cent of the $300-million program has already been spoken for, just 15 months into its three-year mandate.

"It's no surprise to me," said Daniel Breton, president of Electric Mobility Canada, a non-profit agency pushing for the electrification of transportation.

Electric car sales, as a share of overall vehicle purchases, have steadily grown from two per cent of all sales in 2018 to three per cent last year, and to almost four per cent in the first three months of 2020.

But the rate of uptake is heavily concentrated in just three provinces. Quebec and British Columbia, which have sales quotas for electric cars and provincial rebates on top of the federal one, together account for 86 per cent of all the rebates.

Ontario, which had a provincial rebate until 2019, accounted for another 12 per cent, with the remaining two per cent divided among the other seven provinces and the territories.

Breton said the additional provincial rebate makes buying electric cars more attractive in Quebec and B.C. but car makers are also shipping more electric cars there because their dealers have quotas for sales. Availability of electric models is limited, and many drivers have to wait weeks or months for one.

Electric Mobility Canada wants Ottawa to expand the program to include used cars and to increase the maximum purchase price of the cars that qualify for a rebate. SUVs and pickup trucks, which are more expensive, are set to come onto the market. In 2019, almost three in every four passenger vehicles sold were SUVs and pickups.

Cara Clairman, CEO of the non-profit advocacy group Plug'n Drive, says she hopes Ottawa will provide more money for rebates when the current allotment runs out because they are making a difference.

"I think we do need a few more years of it," she said. "You have to look at it as a climate-change program."

Breton is also looking for the rebates to be extended to used electric and hybrid vehicles, which are now more easy to find than new ones in many cases. A 10-per-cent rebate on the purchase of a used electric car was mentioned in the mandate letter for Innovation Minister Navdeep Bains last fall but has not yet been announced.

Transport Minister Marc Garneau was instructed in his mandate letter to do more to make the electric car sales quotas. Before the pandemic, he indicated he was looking at what more to do, including extending or expanding the rebate program. Something was expected in the March federal budget, delayed by the COVID-19 pandemic.

Garneau's spokeswoman was noncommittal Thursday when asked if the rebate program would be expanded.

"This specific program continues and consumers are able to make use of the incentive," Livia Belcea said in an email. "Any changes in funding for the program would be reviewed at the appropriate time and as needed."

This is your opportunity

This is your opportunity Minister Garneau, to make a difference. An extension plus additional rebate for used vehicles will signal Canadians that the Liberals can take the Climate File seriously.

An extension is a great idea.

An extension is a great idea. Rebate for used vehicles? Why, are people currently failing to sell their used electric vehicles? I bet they aren't. No point subsidizing something if it's happening at max capacity already. Better to use that money to increase the rebate for new electric vehicles. The savings'll probably get passed on when it's resold used anyway--nobody's going to buy a used vehicle for more than what the person paid for it new.

A subsidy on replacement

A subsidy on replacement batteries for old electric vehicles, to be paid when the old battery is recycled, now that might be worth doing.

Big mistake.
EV rebates subsidize the rich. EV rebates are a very expensive and thus inefficient way to reduce emissions.
The most efficient solution is to price carbon.

But EV's pose a far bigger problem.
Electric cars are not remotely green. EVs have a huge footprint. And car culture drives urban sprawl. Neither is remotely sustainable.
With their huge footprint, EVs wouldn't be green even if they ran on fairy dust. Much of that footprint is embedded in mining and manufacture of materials. About half of the energy used over the lifespan of a car is expended during its production. Using two tons of metal to transport a 150 lb human being is an ecological non-starter.
Canada boasts the worst fuel economy in the world. Why? Because Canadians prefer large vehicles and trucks.
But large EVs have a bigger carbon and ecological footprint than smaller ICE cars.
The larger the range, the bigger the battery, the heavier the vehicle, and the worse for our environment.
Halving our emissions but doubling the number of cars (in developing world) gets us precisely nowhere.

In perpetuating sprawl, EVs exacerbate the problem and delay real solutions. A one-Earth footprint cannot accommodate an energy-intensive lifestyle where people drive everywhere they go -- or an urban model relying on millions of cars to transport millions of people.
EVs support the unsustainable urban model underlying our high energy/resource consumption. We cannot solve the paradigm problem simply by replacing internal combustion engines with electric motors.
In promoting EV cars, we are still going down the wrong road. Never mind the EV detour. Let's go straight to the solutions. No time to lose.
Sprawl makes efficient public transit impossible. Transit use in many cities is dismal and going down.

No solution to sprawl except to hit the brakes. The decisions we make now set the blueprint for generations to come.
We need to redesign our cities for people, not cars. Invest massively in public transit, cycling and pedestrian infrastructure — and smart urban design that allows people to live close to their place of work and amenities.
The automobile lifestyle will never be green. No car is compatible with a one-planet ecological footprint.
An EV car future is a costly commute away from sustainability goals.