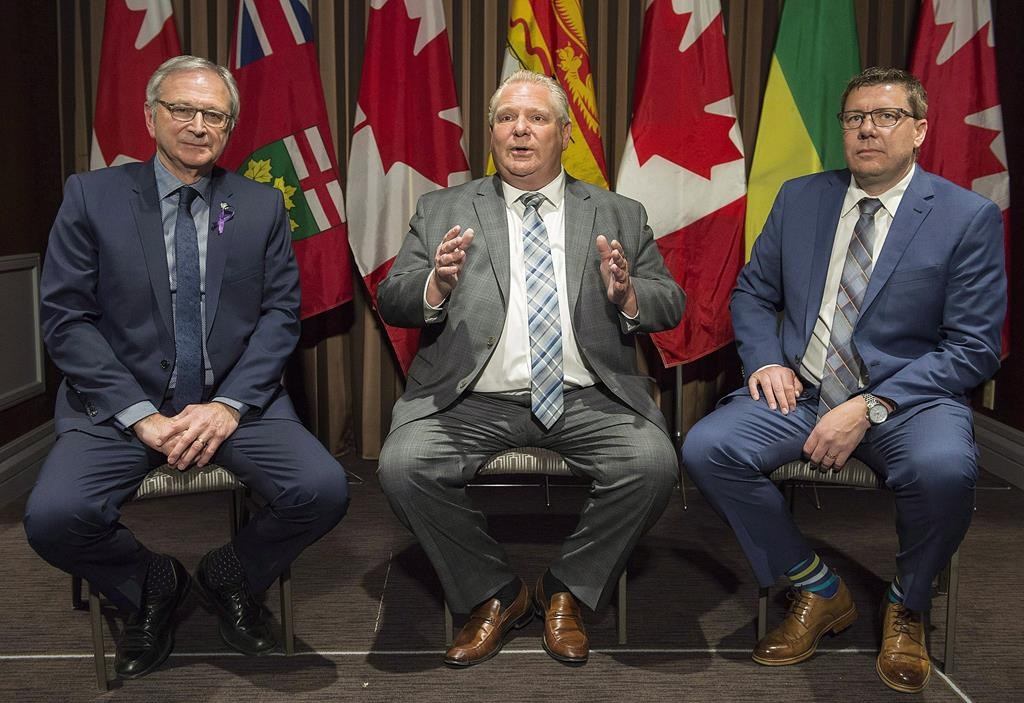 Canada’s leading nuclear industry players announced an inter-provincial corporate partnership Thursday to support the launch of a research centre that will work on developing small modular reactors (SMRs) for use in Saskatchewan.

Saskatchewan Premier Scott Moe said nuclear power is a critical part of the solution to climate change and will help rural and remote communities as a new base for the electrical grid.

The partnership between Cameco and Bruce Power will also research developing infrastructure for hydrogen technologies and cancer-fighting isotopes.

This agreement comes on the heels of Saskatchewan announcing a nuclear secretariat to make way for reactors.

“That technology is a long ways away and a lot of it’s going to depend on... the court of public opinion, whether or not people want that in their own backyard, and that’s the whole issue anywhere in the world," Brooke Dobni.

“The deployment of small modular reactors in Saskatchewan will require collaboration with several partners to fully encompass the benefits Saskatchewan could see in way of jobs, enhanced value chains for Saskatchewan’s uranium, and our made-in-Saskatchewan climate policy,” Environment Minister Dustin Duncan said in June.

No timeframe or SMR sites were included in the announcement, but the government’s plans already have some northern residents raising alarms.

Committee for Future Generations outreach co-ordinator Candyce Paul of La Plonge at the English River First Nation told Canada’s National Observer that they haven’t been consulted on any aspects of the plan, but all signs point to the north as a site for the reactors.

“When we informed the communities that they were looking at planning to bury nuclear waste up here in 2011, once they learned what that entailed, everybody said no way. Eighty per cent of the people in the north said no way, absolutely not. It didn’t matter if they worked for Cameco or the other mines. They said if it comes here, we will not support it coming here,” she said.

Paul said she sees small modular nuclear reactors as another threat to the environment and to human safety in the region.

She noted that even with SMRs under 300 megawatts, nuclear waste is a byproduct.

“Even if they’re not burying nuclear waste here, they could be leaving it on site or hauling it through our northern regions and across our waterways,” Paul said.

Paul said the intent behind installing SMRs is anything but green and that the real goal is to prop up Saskatchewan’s ailing uranium industry and develop oilsands in the northwest.

Paul said that communities around Canada, and especially in the Far North, have long been pitched as sites for SMR development and have refused.

A 2018 brief from Pangnirtung Hamlet Council in Nunavut concluded “any Arctic-based nuclear power source should be an alternative energy choice of last resort.”

SMRs have been pitched in the north as a way to move away from reliance on diesel fuel, which can be costly. Paul said any benefits of that remain to be seen.

She said companies would need to do environmental impact assessments for smaller reactors even though the exclusion zone around SMR sites is smaller.

“I’m not feeling confident in this at all, Canadian nuclear laboratories saying that it would only be a small radius exclusion zone. Well that’s our territory. That’s our land, our waters, our wildlife.

"It’s not their backyard, so they couldn’t care less.”

Brooke Dobni, professor of strategy at the University of Saskatchewan’s Edwards School of Business, told Canada’s National Observer that any development of small reactors would take a long time.

He said nuclear reactors face bigger challenges because of public concerns about the environment and that the high cost of building infrastructure and then containing nuclear fallout and radiation are all concerns before they can go ahead.

The court for that is the court of public opinion, whether or not people want that in their own backyard, and that’s the whole issue anywhere in the world.”

SMRs are anything but a

SMRs are anything but a climate solution. They're still in the research stage, meaning they're decades away from deployment. Every year matters during a climate era, so wasting decades on an unproven technology means wasting years and resources that should be used to roll out renewables. Renewable technologies create more jobs, are ready to deploy today, are a fraction of the cost of nukes, create no deadly radioactive waste, and don't have the potential to poison countless generations with radioactive fallout. Go 100% renewable today!

Renewables are great, but

Renewables are great, but will only produce a modest portion of global energy needs over the next 50-100 years, then maybe technology will have improved enough that we can rely on renewable sources. Nuclear is probably our only hope to save the planet in the meantime. Not a perfect solution, but it doesn't emit carbon, and the newest generation of reactors are vastly safer, produce very little waste, some even burn nuclear waste.

The technology is already

The technology is already there to take us to net-zero by '50.
But not at the rate we're going, handing over trillions to oil companies, building pipelines, opening up coalmines in Canada to Australian companies, and on and on it goes, sucking up to the OilSands while they're planning on continued increase of net emissions -- with no plans in the offing to even start counting what they've failed to do so far.
All I can say about distributed nuclear is ... hooray! Now we can have radioactive waste scattered all about the country. Welcome to Canadistan.

This is the stuff that makes people roll their eyes when a news organ says that "our news and editorial functions are completely separate". There was literally 12 times the space given to the opponents as the proponents.

The nuclear waste issue has been well-covered for six decades. What's different and safer and so forth about these new proposed reactors is almost unknown to the public. The history of coverage would ordinarily have suggested that the proportions be reversed: that the problems of nuclear waste disposal could have been covered with a few paragraphs and some links to the long-existing articles on it, whereas the new technology could have used the 691 words to introduce its differences.

There are very few NO news articles that are not also opinion articles. They should be read with that in mind.

More than one navy use small

Where and how are they

Where and how are they disposing of these?

With interest rates below 1%

With interest rates below 1% it appears to be a great opportunity to advance. I don't see this group developing their own designs more than likely they will pick a Westinghouse design from the US and put it forward. Also, I don't agree with the sizes. Westinghouse puts out a popular 750 MWe plant and China has a robust business going worldwide on 1000 MWe units which would be worthwhile look at. Alberta's electrical market is about 16000 MWe. Smaller units are used to replace lines for a remote industry like oil in which case there would be very little left over for export. The plan needs another look and Consumers have to keep their feet to the fire.

It is baffling that ON

It is baffling that ON Premier Ford entertains entering into this partnership while he has cancelled many green Energy projects (including the wind farm in Prince Edward County) costing taxpayers hundreds of millions of dollars to break contracts and to dismantle!

Perhaps some attention should be given to the loss of our ability to produce nuclear radiopharmaceuticals required for Nuclear Medicine testing, once a staple of the Chalk River site. As Mr Harper decided not to invest in the Chalk River site nor in the creation of a new Canadian site we have been importing radiopharmaceuticals from Europe, South Africa and others who are able to ship to Canada, the home of the Candu reactor!
The irony is bitter as we did not lose our place in the world due to competition but by the lack of vision or interest or knowledge.

We can disagree about the use of nuclear energy but how do we inspire the young creators to promote new technology when this is how we treat our world renowned existing tech?

Our place as what? Rapists

Our place as what? Rapists of the planet? I assure you, we are still punching way above our weight on that score.
I have some sympathy for those who demanded that turbines be taken down. They were sited such that farmers were then told they had to keep themselves and their animals off great swaths of their own land: those are farmers who never consented to have them placed on their properties.
It sounds to me like they were improperly installed, or perhaps defective in the first place. But good grief: there's *tons* of space to put up turbines, without interfering with people's use of their own land. Not to mention the harm it's caused their animals, and in some cases, the residents themselves.
There seems to be some sort of attitude amongst our so-called "leaders", that they need to follow the demands of Big Companies, to the letter ... and need not consult individuals. Or indeed, others with claims to the land they decide they can do with as they will.

Shipping container size nuclear electricity molten salt generators would be a great benefit. I don't believe big business with other priorities ( oil or big nuclear) will let our politicians get small fail safe reactors off the ground. Like the US our Canadian leaders especially at the provincial level are to beholden to big donors, and then that provide to money make the decisions. Look at Pharmacare or lower drug prices. Look at Harper's rewrite of the NEB act and decimation of Canada's environmental regs. Look at our cell phone rates.