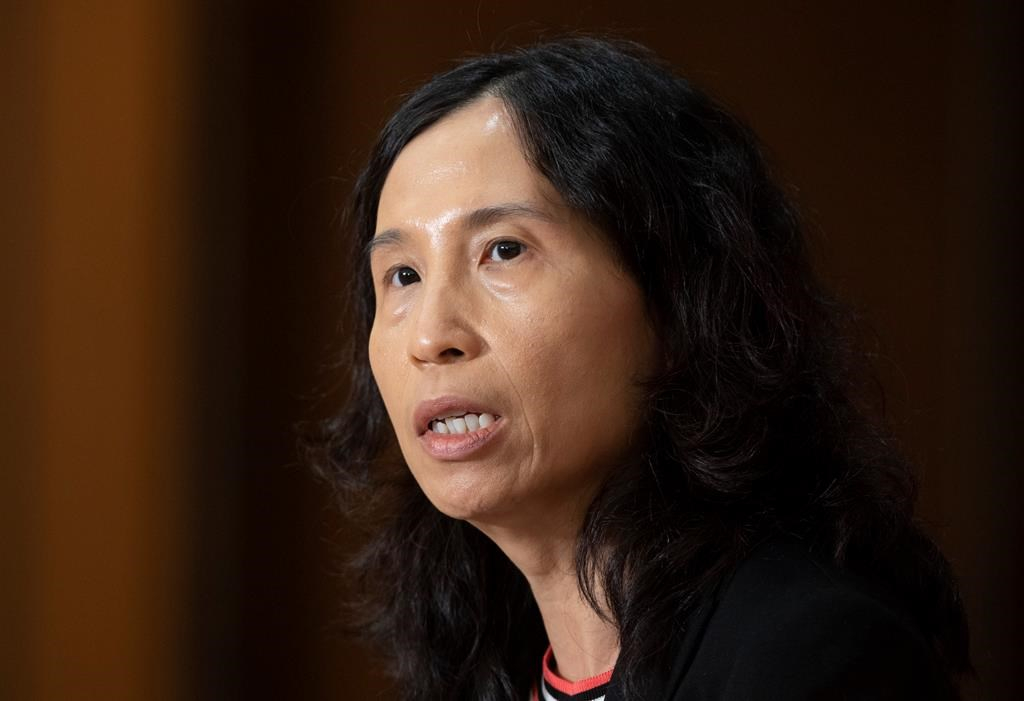 Chief Public Health Officer Theresa Tam responds to a question during a news conference on Tuesday, August 25, 2020 in Ottawa. Photo by The Canadian Press/Adrian Wyld
Previous story
Next story

Canada's chief public health officer is warning against the spread of online untruths about vaccines, as a new survey suggests some Canadians are worried about getting inoculated against COVID-19.

Dr. Theresa Tam made the comments during a news conference Tuesday while responding to the Statistics Canada survey, which found nearly one-quarter of respondents unlikely or unsure whether they would get a COVID-19 vaccine.

Many experts and political leaders have touted the successful development and widespread rollout of a vaccine as essential for an eventual return to normalcy, including the full reopening of economies and ending physical distancing.

More than 76 per cent of respondents in the Statistics Canada survey indicated they would likely get inoculated if and when a vaccine is ready. Yet 14 per cent said they were somewhat or very unlikely to do so. Nine per cent remained unsure.

Those who indicated they were unlikely to get a vaccine were asked to identify the reasons for their reluctance. More than half cited a lack of confidence in its safety while a similar number said they were worried about potential risks and side effects.

About one-quarter of respondents, who were allowed to give more than one answer, said they did not consider it necessary to get the vaccine while about 10 per cent indicated they did not believe in vaccines at all.

More than one-third said they would likely just wait until the vaccine seemed safe.

The survey also indicated younger Canadians and those who don't have a university degree are more likely to be hesitant or nervous about a vaccine than those who are older and more educated.

The crowd-sourced survey of around 4,000 Canadians was conducted between June 15-21. It cannot be given a margin of error because the participants do not represent a random sample.

Asked about the survey, Tam underscored the importance of "vaccine confidence," describing it as integral to the successful rollout of vaccine.

Canada's chief public health officer is warning against the spread of online untruths about vaccines, as a new survey suggests some Canadians are worried about getting inoculated against COVID-19.

She went on to promise that regulators won't take any shortcuts with safety despite the government agreeing to several changes to the clinical-trial process to get a potential COVID-19 vaccine developed faster.

"Just because it's an accelerated process to get vaccines for Canadians does not mean we're going to shortchange anything on safety and effectiveness," Tam said. "I do have confidence in our regulatory system."

Tam also took aim at the spread of falsehoods about vaccines online.

"I do think social media and internet companies do have responsibilities in terms of their role in the space," she said.

"So I would look towards different partners, different government departments also coming together to look at how we better address some of the misinformation that's in that space."

She is not the first to speak out on this issue, as some have blamed the growing number and influence of anti-vaccination groups online for a resurgence in childhood diseases such as measles.

Facebook announced last year that it would be cracking down on so-called "anti-vaxxer" groups, which included labelling posts deemed as containing false information about vaccines. The social media giant now being sued by one such group in California.

Josh Greenberg, a communications professor at Carleton University who has been studying Canadians' attitudes towards a COVID-19 vaccine, said safety concerns aren't unexpected, given the pressure governments and industry are facing to get something working fast.

Yet he said it is essential that Ottawa push back against misinformation campaigns, which have been growing in numbers and influence even as governments around the world have been slow to react.

"When you look at issues like COVID-19 and the campaign to ready or prepare the public for the eventual release of a vaccine, you're talking about a battle for both hearts and minds," Greenberg said.

"It's not just an information battle of trying to make sure that people have accurate information, but that you are persuading them in such a way that they trust the veracity of the information you're providing and they also trust the source of that information."

While the world is rushing to find a vaccine for COVID-19, new reports of several people having been reinfected with the novel coronavirus after testing positive once before raise concerns that it might be a moving target.

Deputy chief public health officer Dr. Howard Njoo said the cases in Hong Kong, Belgium and the Netherlands highlight ongoing questions about immunity to COVID-19 and the need for an effective vaccine.

This report by The Canadian Press was first published Aug. 25, 2020.

It is essential that ALL the

It is essential that ALL the data from tests of any vaccine be made freely available to the public before anyone is vaccinated. There must be double-blind placebo-controlled studies with al procedures and results made public.