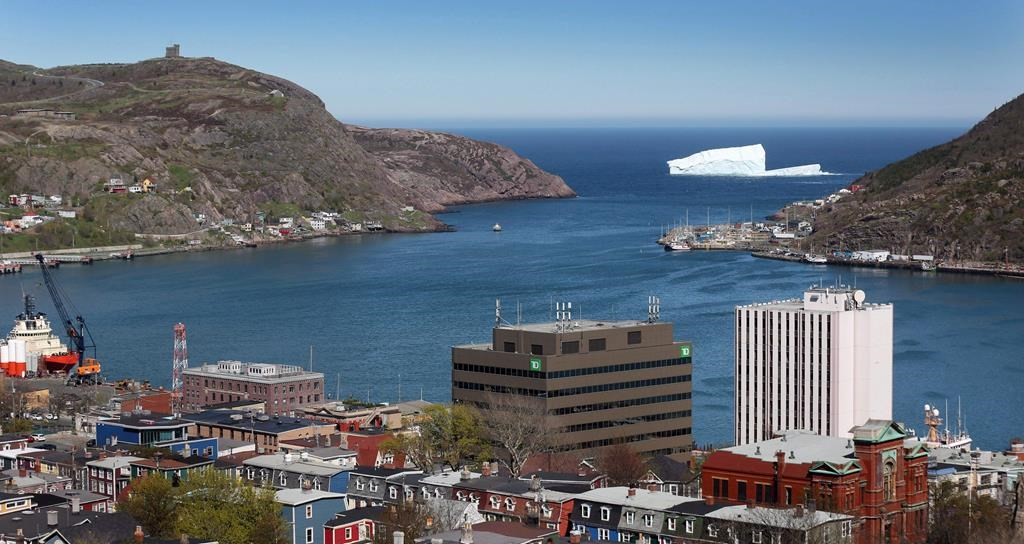 An iceberg is seen just outside of the Narrows of St. John's Harbour on Friday, June 13, 2014. File photo by The Canadian Press/Paul Daly
Previous story
Next story

St. John's is making changes to city infrastructure in preparation for a wetter, warmer future with more intense storms.

A report on climate models for the coastal Newfoundland and Labrador capital was presented at city hall earlier this month, predicting rainier winters, warmer summers and more frequent storms leading up to 2050. The report also predicted sea levels to rise through the end of the century.

The data will be used to inform a formal sustainability plan due next summer, but Coun. Ian Froude said Tuesday some actions are already underway.

"We've been doing earlier actions, but it's a comprehensive look at what the key risks are going to be for the city of St. John's due to climate change," Froude said. "It gives us the lay of the land."

Stakeholder groups will be set up next month to review the findings and "narrow our focus" on actions the city should take to adapt to and mitigate the effects of climate change, Froude said.

He pointed to an ongoing capital works project on Kenmount Road that is increasing the size of the stormwater pipes under the street to prepare for more rainfall. That project, he said, has slowed traffic along the busy road this summer and is one example of the costly, disruptive but necessary changes the city must make.

Froude, council lead for the Public Works and Sustainability Department, said adapting to climate change is challenging for an older city such as St. John's, whose aging infrastructure was not built for the increased volume of water expected in the coming years.

According to the city's climate profile outlined in the report, which draws from federal and regional research by climate scientists, "the amount of precipitation is projected to increase overall."

"St. John's will be almost four times more likely to see a storm with approximately 133 millimetres of rainfall over 24 hours by mid-century," the report reads, citing work by Memorial University of Newfoundland scientists. It also notes that freezing rain events are projected to increase overall.

Less precipitation is expected to fall on the city during the winter, but weather events will have greater intensity. Less snow is also projected, meaning "it is likely that more winter precipitation will be freezing rain or rain."

St. John's is making changes to city infrastructure in preparation for a wetter, warmer future with more intense storms.

"Most storm events are projected to increase in frequency and intensity, specifically events with durations over 30 minutes," the report reads.

St. John's residents are familiar with the impacts of an intense storm event and heavy precipitation following last winter's a blizzard, which required the help of the Canadian military to clean up. The city was under a state of emergency for eight days after the Jan. 17 blizzard buried streets in more than 76 centimetres of snow in a single day.

Although scientists maintain that individual storms cannot be linked to climate change, climate scientists told The Canadian Press at the time that the snowstorm highlighted the need for better preparedness for increasingly severe weather events.

Froude said it's tricky to prioritize infrastructure upgrades. He said some projects require more funds than the municipality has available.

The city, he said, is looking into placing berms or water-retaining walls along Rennie's River in preparation for potential flooding from more frequent high-intensity storms. But Froude warned St. John's has to think about making changes without disrupting fish habitats or the popular trail along the river.

"We have to make sure that solutions don't create other problems," he said of the ongoing project. "It's finding a balance where we protect those natural assets, those social community assets, while addressing some of these issues."

This report by The Canadian Press was first published Aug. 25, 2020.