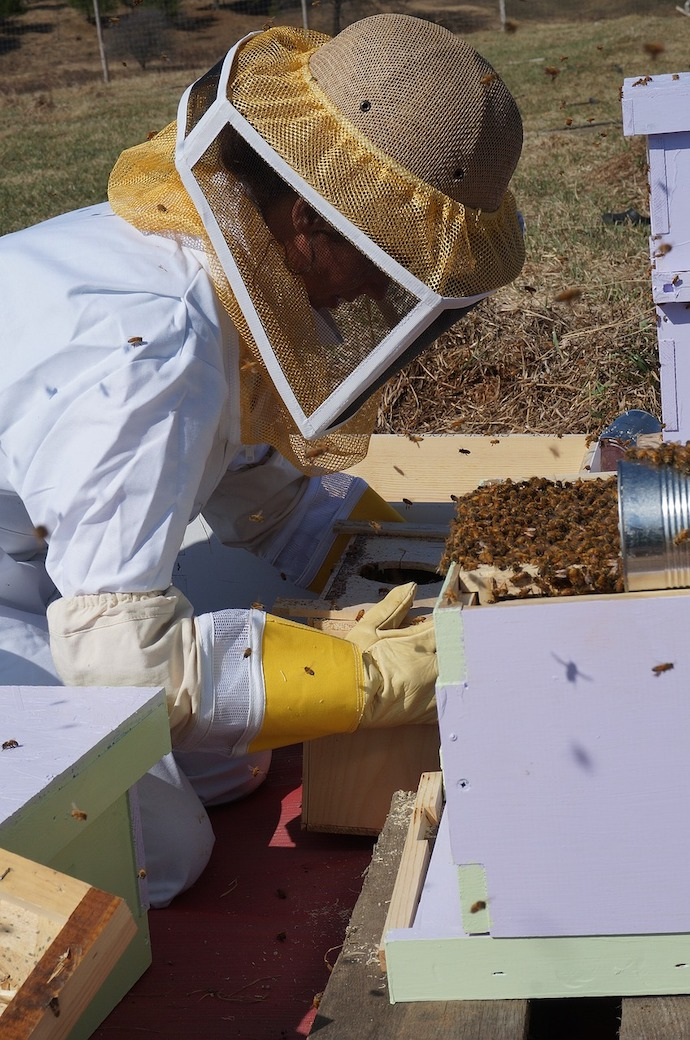 There are about 10,000 beekeepers in Canada managing more than 750,000 colonies. Most import queen bees annually to kickstart production. Photo by pellegrinifarmgirl/pixabay
Previous story
Next story

Flying 250,000 bees across the Pacific is complicated. Especially in a pandemic.

It’s a challenge Rod Scarlett knows well. When most international flights stopped in March, thousands of queen bees were stranded abroad, and Scarlett, the executive director of the Canadian Honey Council, had to figure out how to get them to Canada before the spring thaw.

“The early spring is when we really need queens from an area that can provide them. That is, Australia, New Zealand, the U.S. and Chile,” he said.

Bees are essential to B.C.’s agricultural sector — the province’s $370 million blueberry, raspberry and tree fruit crops depend on them — and contribute an estimated $538 million to the provincial economy overall.

It’s a contribution that has become even more important over the past several decades.

Habitat loss and pesticides have decimated native pollinator populations — for instance, bumblebees (a key native pollinator) have seen their relative abundance crash by 97 per cent, with the sharpest decline occurring in the past 30 years.

Beekeepers lose roughly 20 per cent of their colonies during the winter, Scarlett explained, and the colonies that aren’t killed can emerge from the season weakened — a major issue for Canadian beekeepers, and the farmers relying on them to pollinate crops early in the season.

“You have to have queens early in the year so that you have a productive colony,” Scarlett said.

Flying 250,000 #bees across the Pacific is complicated. Especially in a #pandemic. Bees are key to #BC $370 million #blueberry, #raspberry, and tree fruit crops and contribute about $538 million to the provincial economy. #AAFC #COVID19 #food

They’re built from bee larvae and fed a special diet by the colony to become sexually mature. Once they reach maturity, the young queen will fly out of the colony and mate, before returning to lay eggs for several years. Those eggs become worker bees, who leave the colony each day to collect pollen and nectar, the ingredients for honey and the queen’s exclusive meal: royal jelly.

Without a strong queen, worker bees won’t leave the colony in search of pollen. That search leads to plant pollination — the sole purpose for the third of Canada’s commercial bee colonies used for commercial crop pollination. These beekeepers need to know their colonies will be searching for pollen when the crops they’re hired to pollinate are flowering.

And so, Canada import bees — queens, or two-pound packages of worker bees and queens — from warmer (and bee-disease free) places.

“We get a majority of these queens from a quarantined area in Northern California and from Hawaii,” Scarlett said — a problem when the pandemic hit.

It was an emergency for beekeepers and farmers across the country: How would several hundred thousand bees cross the Pacific?

There weren’t many options, especially because bees need to travel in climate-controlled cargo holds. FedEx and UPS couldn’t deliver Hawaiian bees across the Canadian border. Chartering a plane to the U.S. state — let alone other bee-producing regions such as Australia, New Zealand and Chile — was prohibitively expensive.

And Air Canada, usually the main bee transporter, stopped flying all animals because of the pandemic.

“As COVID-19 began to reshape our reality, there was a real possibility that the bees would not be imported,” wrote Marie-Claude Bibeau, the federal Minister of Agriculture and Agri-food in an op-ed. “The outlook was grim.”

Some good news to highlight about our favorite pollinators and honeymakers!🐝#Beesinflight #CdnAg https://t.co/6JcBTN2rRt

Scarlett agrees. “It was a stressful two weeks,” he said.

The situation was serious enough that the federal government stepped in, coordinating an exemption for honeybees from Air Canada’s zoological travel ban that allowed bees to be flown into — and across — Canada.

About 202,000 queen bees had entered Canada as of Sept. 1st, compared to 236,000 last year, according to Agriculture and Agri-Food Canada.

Fewer packaged bees made it into the country, with 68 per cent less packages arriving this year than last.

Scarlett isn’t concerned by these lower numbers. After all, the situation could have been much, much worse: Had the bee supply chain broken, roughly $2 billion worth of crops Canada-wide would have failed.

That's a lot worse than shelves emptied of toilet paper.

So now's the time for Bee

So now's the time for Bee Associations to encourage beekeepers to grow their own queens. My father some 40 years ago, overwintered one super from each hive, in the northern interior of BC. His only problem there was keeping the bees from flying before there were enough flowers but he found they fed on trees, on evergreens till the
The pine honey was amazing, the color of dark maple syrup, and very strongly flavored: like wild aster honey on steroids!
I would suspect that lack of flowering plants in early season wouldn't be an issue for much of Canada now, given the earlier springs.
He had chatted in his travels with a European farmer from northern Ontario, who'd adapted the Old Country methods for the northern winters. If bee associations are interested, I might be able to point them to someone who'd be willing to consult as to the methods he used.

"His only problem there was

"His only problem there was keeping the bees from flying before there were enough flowers but he found they fed on trees, on evergreens till the ..."
Not sure what happened there: it should hav read " ... till the deciduous trees and early spring flowers blossomed."

This is an insane operations

This is an insane operations model. Use pesticides that kill the bees they need to pollinate their crops and then import bees to do the job the bees they are killing could do. Farmers feed cities!

Isn't globalism wonderful.............who needs local bees when you can fly them in cheaper. I didn't even read the damn article.........but in our garden, the bees are local, prolific, and free.

What in the name of all that's holy have we been thinking these last 30 years? Foreign temporary workers for everything............including pollination?