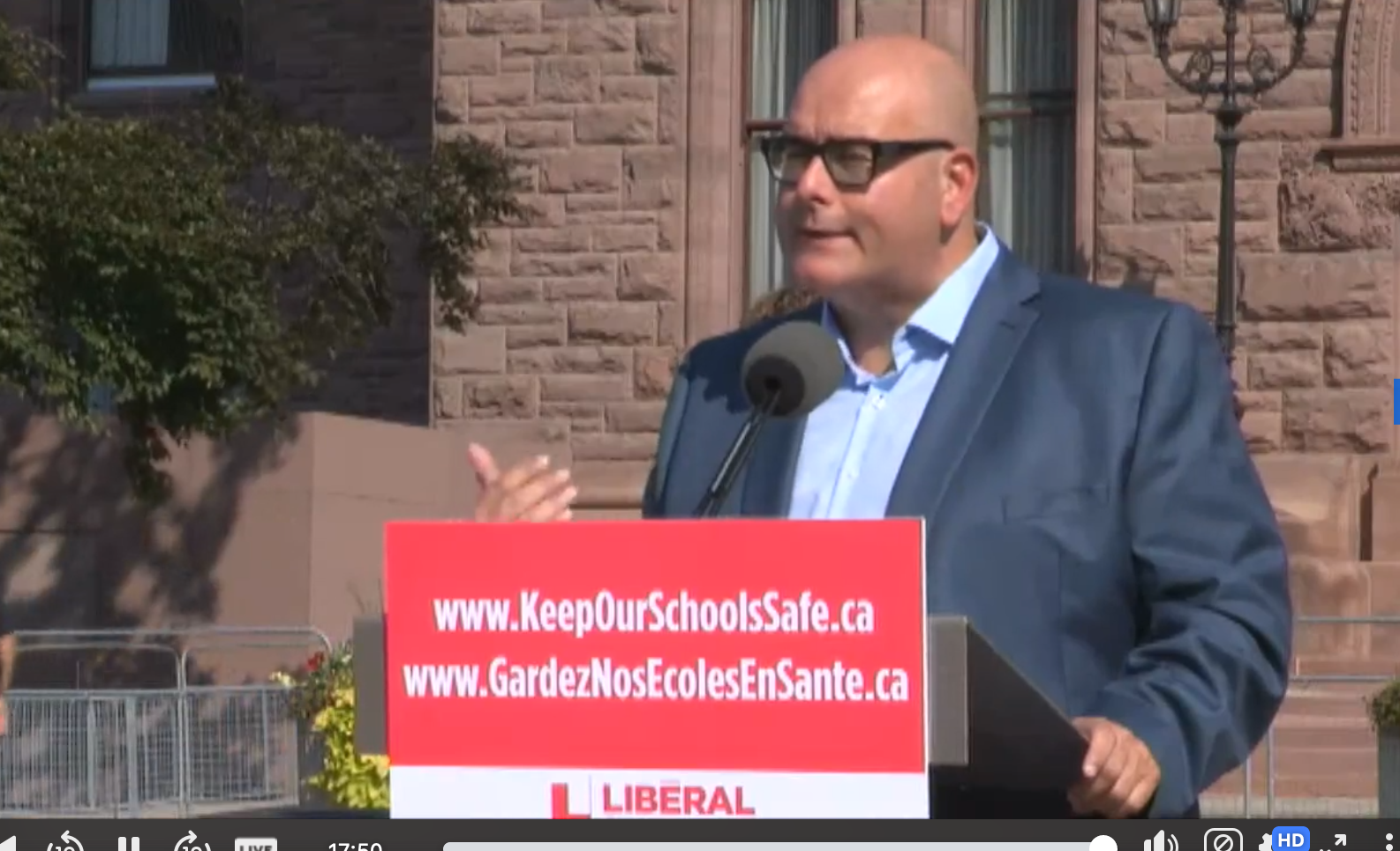 He wants to hear the good and the bad, Steven Del Duca says. But mostly the bad.

Standing outside Queen’s Park with a selection of concerned archetypes – the parent, the senior high school students, the teacher, the bus driver, the retired trustee – the leader of the province’s Liberals asked Ontarians to get in touch.

“We want to be one, as part of many, opportunities for people to give voice to their concerns and anxieties,” he said, pointing people to the Keep Our Schools Safe website the Liberals launched Tuesday.

“We want to hear from Ontario families, from educators, from everybody in the system, good stories and bad,” he said.

The fight over Ontario’s education system that raged before the pandemic has turned increasingly political as schools across the province prepare to re-open. The Liberals are duelling with the official Opposition NDP to land the heaviest blows on Doug Ford’s Progressive Conservative government.

The Liberal site requires that submissions include a post code and email address and permission for the party to stay in touch.

Asked directly by Brian Lilley of the Toronto Sun whether this was mostly about collecting data of potential voters, Del Duca said he’d happily share the insights gleaned from the website with the government, presumably without the names and contact details.

“I hope the premier, I hope Doug Ford will listen to us and, more importantly, listen to them,” he said.

Steven Del Duca and the @OntLiberal want to collect the contact details of parents, teachers and others concerned about @fordnation's back-to-school plan

“The disclaimer information is very clear individual Ontarians can provide the information to us anonymously,” he said, adding that the party always respects someone who does not want to receive any more information from them.

And then he turned to the school-themed one-liners, the sound bites Del Duca would no doubt hope to get in the heads of voters ahead of the next election, due in mid-2022.

“Doug Ford didn’t start his homework on this in March,” when schools were first ordered closed for an unknown amount of time, he said.

“He is trying to cram for an exam the night before, and our kids and our system and our families deserve better than that.”

Del Duca did not survive the Liberal Wynne government’s rout in 2018, and so has less opportunity for relevance when parliament is in session.

But with summer break extended for parliamentarians, his party and the NDP have been touring schools to highlight the problems they have with the plan Ford and his education minister, Stephen Lecce, unveiled in late July.

Just ahead of the release of the government’s $309-million budget for the reopening plan, Del Duca put out his party’s estimate that suggested a safe reopening would require a $3.2 billion investment.

Ford and his ministers have meanwhile also fanned out for funding photo-ops and to present their message of having done all that they can to make the re-opening safe.

Ford and Lecce and provincial health officials toured a school in Toronto Tuesday to see a new outdoor learning space, a wellness space that can turn into an isolation space, and modified teachers’ lounge and other changes implemented as part of the plan they say is the safest in the country.

The party said in a statement that the Liberals were collecting personal information for use in fundraising campaigns and said the website "raises serious ethical and privacy concerns."

Interesting article. Very evident what the Liberals are looking for when he stresses "Especially if they're bad". The wording pretty much stresses they want to hear the bad. It's no wonder we have people pissed off. Seems to me it is time to look for both comments placing more emphasis on "bad" does nothing to help the situation, it just fuels the opposition parties attach on the government.

I'd love to hear the "good"

I'd love to hear the "good" stories about our schools reopening.