Canary in the coal mine: Birds predict change in Sask. boreal 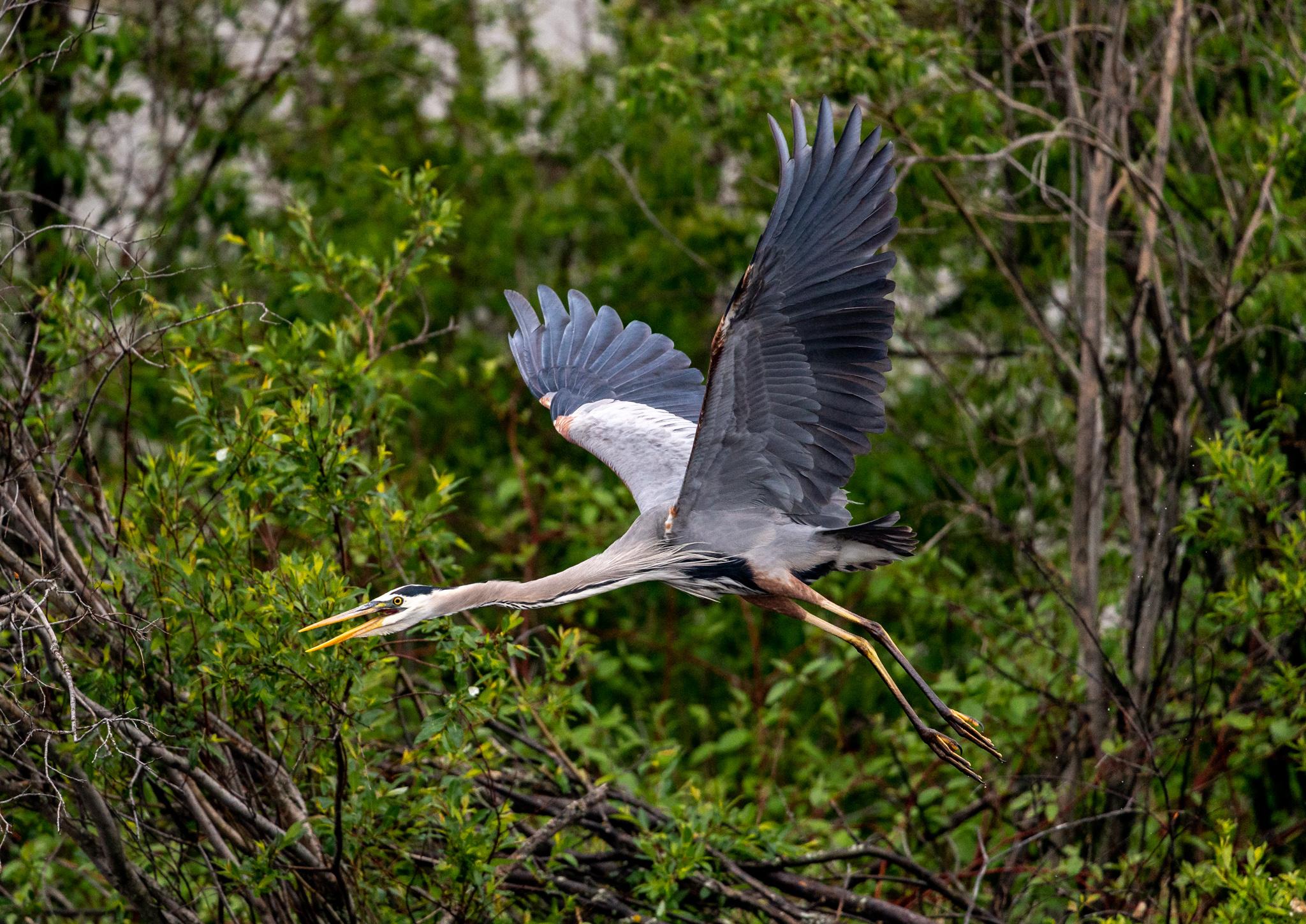 Years of arduous fieldwork are starting to come together, with just one summer left before the project is complete.

The atlas is a five-year project by Birds Canada, a non-profit that engages volunteer citizen scientists to help map the distribution and relative abundance of breeding birds over a geographic area.

And the resource will help researchers further understand the impacts of pollution and climate change on the environment.

When it's complete, the project aims to publish an open-access and comprehensive digital account of the status of breeding birds in the province.

Birders and nature lovers don't just have to sit around and wait for the project to wrap up, though — they can get involved. Anyone can report sightings to the atlas project and play a part in the science behind it.

Having the atlas will allow for a better understanding of what’s going on in our environments, if not exactly why.

“This really is going to be part of Saskatchewan’s ornithological legacy. It’s our first comprehensive breeding bird atlas in the province,” LeeAnn Latremouille.

And this goes well beyond birds. That’s because birds respond quickly to environmental stressors and habitat change, so they are good indicators of environmental health.

Bird atlases are used in environmental impact assessments by industry or conservation planning by governments and ecological groups.

It’s a Canada-wide movement. Atlases for Saskatchewan, Ontario and Newfoundland are in the works, while British Columbia, Manitoba, the Maritimes and southern Quebec have published atlases.

“Atlases are the go-to source for bird information because of the rigour behind it and the way it’s designed,” Latremouille said.

She said atlases are repeated every 20 years so that scientists can see the changes over time.

“That’s really the beauty of a project like this. It's not just a static range map, it gives us more fine-scale information.”

While northern Saskatchewan might be small in population, it's big in the bird world. One billion to three billion birds from at least 300 species depend on Canada’s boreal forest for their breeding grounds.

Bird populations are in sharp decline around the world and the health of the boreal forest has a ripple effect across the globe.

Northern Saskatchewan is an especially important breeding habitat for migratory bird species, such as belted kingfishers, bufflehead ducks and nighthawks.

Sandhill cranes, great blue herons, loons and pelicans can be found near lowland rivers and lakes where they nest. Bald eagles, osprey, red-breasted mergansers, and great grey owls depend heavily on forest and aquatic habitat in the area.

“There's been 500 million boreal forest birds lost since 1970, which is a 33 per cent decline in populations. Pretty severe for the boreal,” University of Saskatchewan biology professor Christy Morrissey told Canada’s National Observer.

La Ronge-based videographer Brandon White has been observing bird species in northern Saskatchewan since returning to the region after getting a bachelor of science in biology at the University of Saskatchewan.

White, who worked under Morrissey for a time, said he has seen a decline in breeding birds in the region, which he said needs to be taken seriously as a reflection of broader changes in the environment — changes that will impact other species, including humans.

He said a good analogy is the “canary in the coal mine,” where the health of the planet represents the mine and birds, fittingly, act as the canary.

“There are many bird species that are canaries in our industrialized globe — the coal mine, in this example. It's all of our beloved bird species on this planet Earth as we undergo the increased industrialization of this Earth. We need to look at these declines seriously and ask, 'Are these canaries?”'

For Morrissey, that’s an emphatic "Yes."

Morrissey is an expert on the impact of environmental contaminants, such as pesticides, and industrial pollutants, on bird migration.

“The neat thing about birds is that there's a bird for every habitat, for every environment. No matter how harsh it is, there are always birds.”

She said that by studying a group of birds, you can address problems going on in virtually any ecosystem. Morrissey said understanding declines in the bird population gives a heads-up on the health of the environment due to climate change, industrial pollution and other factors.

If you’re looking for variety, head north with some binoculars. Approximately 30 per cent of all shorebirds (seven million) and 30 per cent of all land birds (one billion to three billion) that breed in the United States and Canada do so within North America’s boreal.

The boreal region has its own set of unique challenges compared to the Prairies.

“In the boreal, we have threats, too. We're losing forest area, we have oil and gas and other mining activities that are destroying habitat at a rapid rate,” Morrissey said.

She said expansion of projects and encroachment into habitats that were once contiguous and pollution from industry are concerning.

In the Prairies, bird habitats are especially impacted by pesticides used in agriculture.

“Saskatchewan is the most intensive agricultural region of Canada in terms of land area that's under crop, as well as chemical use,” Morrissey said.

Morrissey said climate change compounds the effects of pollution, especially in places where temperatures are becoming unpredictable, such as the Arctic and boreal forests.

She said that despite the importance of boreal ecosystems, there’s a lack of research on boreal birds. That's partly because those regions are more remote, difficult to access.

Latremouille said while the project is a long wait, it’s worth it. Once finished, Saskatchewan’s Breeding Bird Atlas could be a big part of the solution for the province.

Fascinating as it may sound, Latremouille’s job might not be for everyone. She spent the summer doing point counts, which means standing in one place and counting birds based on sightings and sounds.

“Point counts help us to get information about relative abundance of the birds and this requires that you know your birds really well by song,” Latremoille said while doing fieldwork near Leader.

“So you’re standing somewhere and listening and you're counting all the birds in a five-minute period really early in the morning. Depending on how far of a drive I have, I’m up between 3 and 3:30 in the morning. I get dressed, coffee, drive out to point count locations and count all the birds that you’re able to detect by ear and by sight.”

This year, the pandemic made fieldwork in the north impossible.

Latremouille was in La Ronge last year and talked to high school students about bird identification. She also set up bird-song monitors along traplines in the winter to capture boreal species that are harder to access in the summer.

“This winter, they had a snowmobiling trip up the trapline and placed a bioacoustic recorder along the trapline. We introduced students to the concept of bioacoustics,” Latremouille said.

“It’s the ability to make a recording of bird songs. You put out this box that sort of works in the same way as a trail cam would, except this is set up … to sample the bird community. It records and then you’re able to retrieve it.”

This year’s point count is over and next summer will be the last chance to pull out your binoculars and get involved for the first edition of Saskatchewan's bird atlas.

“I think it’s a lovely way for people to connect with nature,” Latremouille said.

“The cool thing about a project like this is that it asks you to take a little time and look at the bird’s behaviour. If you see a bird carrying food for its chicks or if you see it carrying nesting material, you've just confirmed breeding.”

Right now, most birds in the boreal have finished their breeding season and are preparing to moult and migrate south, so make sure to tune in as spring 2021 approaches.

Birds Canada also does training for newbie birders, but expect some changes due to the pandemic. For more information and to learn how to be part of the project, email sk.birdatlas.ca or Tweet them @BirdsCanada.

How birding helped a northern journalist cope with isolation

'Nothing we can do:' High water threatens lakeside homes