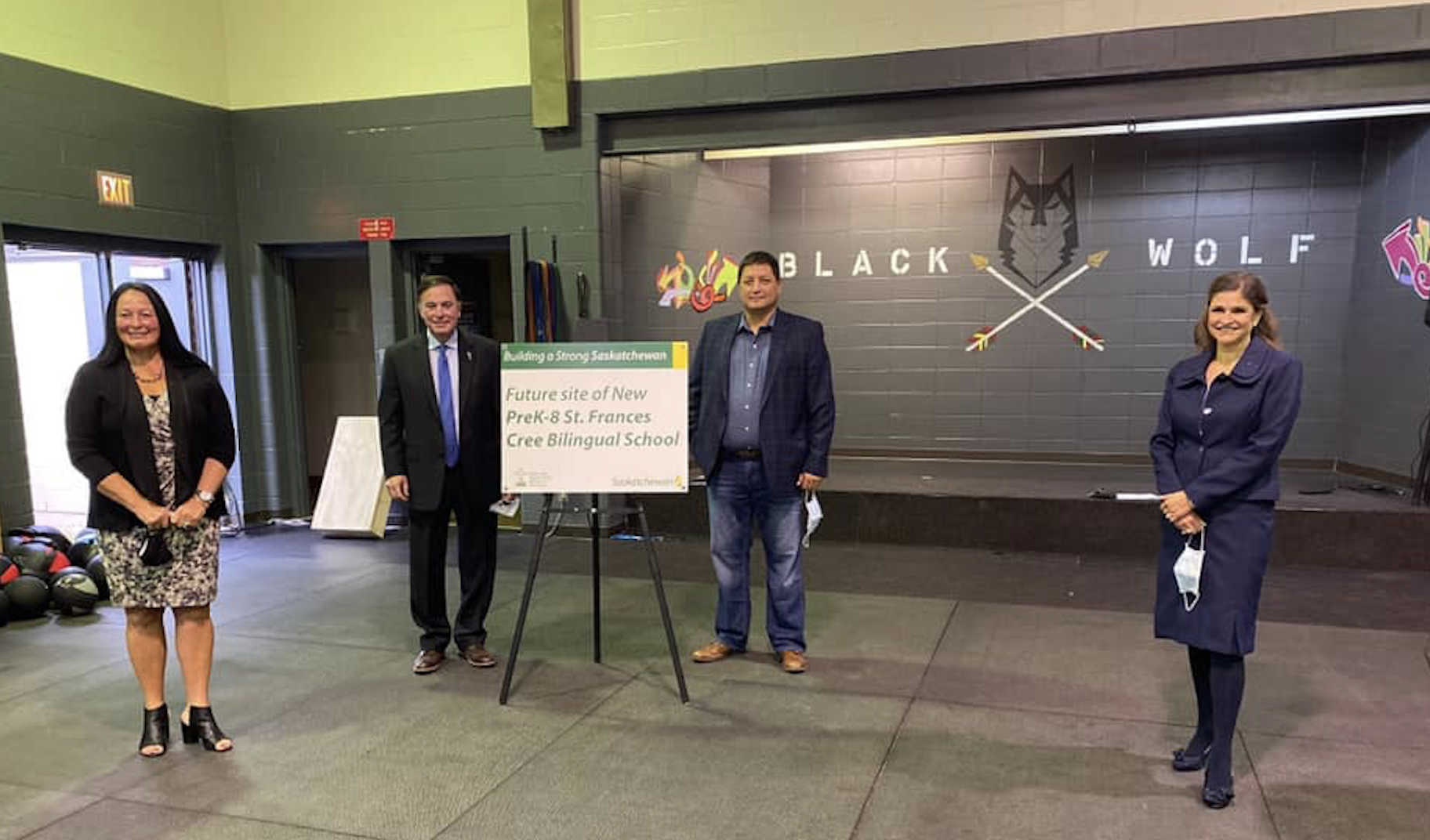 Cree language learners have something to look forward to in Saskatchewan — a permanent site for St. Frances Cree Bilingual School in Saskatoon.

There are roughly 20,000 Cree speakers in Saskatchewan, where it is second to English as the most spoken language at home.

More than half the First Nations in Saskatchewan are Cree and the Lac La Ronge Indian Band, boasting around 11,000 members, is the largest First Nation in the province.

Deputy premier and Education Minister Gordon Wyant was joined by representatives from the Greater Saskatoon Catholic School Division, Saskatoon Tribal Council and parents of St. Frances students to announce $34.5 million in funding for the school on Sept. 2.

“The new facility will provide space for approximately 700 students to support the growth and development of the families and students in Saskatoon’s St. Frances community for years to come,” Wyant said.

“The new St. Frances Cree Bilingual school will continue to ensure an equitable and inclusive system that benefits all learners.”

Right now, St. Frances Cree Bilingual School operates out of two separate locations as a temporary solution to its enrolment growth since it was established in 2007.

The new facility will be at 2010 7th St. East in Saskatoon, the site of the former Sion Middle School.

It is expected to provide space for 700 pre-kindergarten to Grade 8 students, which the government said will reduce enrolment pressures on the growing St. Frances Cree Bilingual School.

“Although colonization has negatively impacted our ability to access our language and culture, we continue to move forward with great perseverance and resolve,” Saskatoon Tribal Council Chief Mark Arcand.

“There are a lot of smiling faces knowing a new St. Frances Cree Bilingual School is that much closer to becoming a reality,” Greater Saskatoon Catholic Schools Board of Education chair Diane Boyko said.

“It has been a long journey for students, families, staff, and for our board to get a school facility that is representative of the learning that happens inside and out. Longer still is the journey of reconciliation with the Indigenous community, and this is a very tangible indication of our commitment along that journey.”

While planning and design for the new facility is still underway, the education ministry said it is working with the school division, Saskatoon Tribal Council, parents and community members to ensure that a shared vision is incorporated into an inclusive design for all learners.

“Our elders have taught us that to fully understand our traditional culture, we must begin by learning our inherent languages,” Saskatoon Tribal Council Chief Mark Arcand said.

“For the past 14 years, the seven member communities of Saskatoon Tribal Council have collaborated with Greater Saskatoon Catholic Schools to provide leadership and direction at St. Frances Cree Bilingual School,” he said.

“Although colonization has negatively impacted our ability to access our language and culture, we continue to move forward with great perseverance and resolve,” Arcand said.

“Our young people are the fastest-growing population in Saskatchewan, and a new St. Frances Cree Bilingual School will offer a long-overdue solution to the space issues that have been created as a result of our success.”

Since 2007, the province has committed more than $1.9 billion toward school infrastructure projects, which include 85 major school capital projects and numerous smaller projects, such as portable classrooms and preventative maintenance and renewal.

Cree is the most widely spoken of Canada’s First Nations languages with an estimated 75,000 speakers, including dialects in Quebec, British Columbia and the Northwest Territories.

I am beyond happy. My

I am beyond happy. My indigenous friends' languages, on the brink of extinction in some cases, are reviving, and not one minute too soon. Grandfather Commanda, Ojigkwanong, was fluent- but very aged, and has died since I met him.
As a descendant of settlers, I never ever learned the true history of our relations until I supported an Anishinaabe community when their land was threatened by a mining company. What an education! Devastating- I never looked back. In school I learned only more English, and then French- the colonists' tongues.
The beauty I can see from glimpses of indigenous languages inspires me. Someday I hope my grandchildren- settler descendants- have a chance to learn the deep beauty of feelings and ideas that don't exist in their present language.