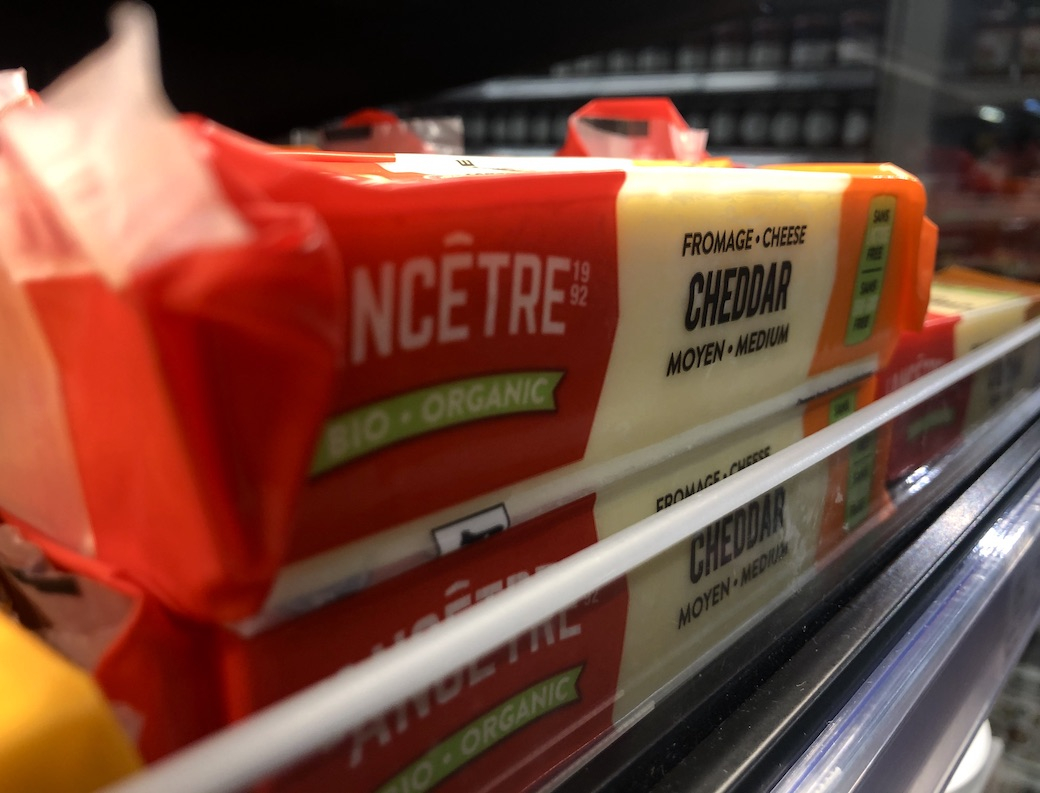 Canada produced roughly 3.2 kilograms of cheddar per Canadian in 2015 — even though it's no longer Canadians' preferred type of cheese. Photo by Marc Fawcett-Atkinson
Previous story
Next story

That’s not unusual. The sharp, hard cheese — a statistical benchmark for the federal government — has a long history in Canada’s almost $7-billion dairy industry. A history that’s key to understanding modern-day dairy politics.

“You need to go back to the farm level and the pricing of raw milk used to make cheese,” Al Mussell, an economist and research lead for Agri-Food Economic Systems, said.

Canada made roughly 515 million kilograms of cheese in 2019, costing on average $15.14 per kilogram.

About 31 per cent this was cheddar, while the remainder was what Statistics Canada calls “variety cheeses” — a group that includes everything from mozzarella to camembert.

These cheeses are by far preferred by Canadians: Their production and consumption has more than tripled since 1980. Cheddar consumption remained relatively stable during the same period.

It wasn’t always like this: Cheddar was once Canada’s most coveted dairy product at home and abroad.

“Cheddar cheese was a huge item that was exported to Great Britain during the war,” Mussell explained.

Canada, along with other Commonwealth countries such as Australia and New Zealand, was a key supplier of food to Britain during the Second World War. By 1945, more than 325 million kilograms of cheddar had been sent across the Atlantic to support the war effort.

#Canada had extra #cheddar in July. About 42,000 tonnes extra cheddar. That’s not unusual. The sharp, hard cheese — and a statistical benchmark for the federal government — has a long history in Canada’s almost $7 billion #dairy industry.

That demand transformed the Canadian dairy industry, boosting the volume of milk farmers could produce and the amount of cheese and other dairy products made in the country. It was a boom for Canadian farmers, one that many expected would continue after the war, Mussell explained.

It didn’t. Demand for Canadian cheese and dairy tumbled, leaving farmers with too much milk on their hands and unsustainably low prices.

“We languished for decades under these chronically low milk prices,” Mussell said.

The federal government took a few different tacks to help dairy farmers through the 1950s, including import controls and subsidies to keep the industry afloat. These subsidies ended up costing hundreds of millions of dollars, Mussell explained, essentially to offset surpluses.

It wasn’t a sustainable solution, so the federal government developed a policy to cap the number of subsidies a farmer could receive with the goal to reduce the overall supply of dairy.

From there, it was a relatively easy shift in 1965 to capping the volume of milk farmers could produce — giving them milk production quotas, in other words. It was the start of a supply management system that endures today.

Canadian dairy farmers each own a milk quota, which only allows them to produce a set quantity to prevent milk flooding the market, while milk prices are controlled to reflect farmers’ costs of production. Both mechanisms are managed by the Canadian Dairy Commission.

Milk and dairy imports are also strictly controlled, with high tariffs applying to all dairy imports above a set threshold — a major sticking point between the Canadian government and the Trump administration in the recent NAFTA renegotiation.

It’s an approach that’s not without critics.

“A straightforward approach to improve the quality of life for all Canadians is to eliminate the quota system and restore a competitive approach to pricing our basic food inputs,” states a 2017 report by the Fraser Institute, a Vancouver-based right-wing think tank.

The supply management system, it argues, results in Canadians paying unnecessarily high prices for dairy products. Prices that could be lowered in an unregulated dairy industry similar to the one in the U.S.

It’s a model with no guarantee of success: Dairy products are not significantly cheaper in the U.S. For example, in December 2018 the average price of American cheese was $15.60 per kilo — 46 cents more expensive than in Canada. Meanwhile, American dairy farmers deal with significant price fluctuations, exacerbated by COVID-19, that put intense pressure on farms’ financial viability.

For Mussell, those arguments hold minimal appeal — especially when the supply management system is put into context.

“What I see is decades of misery (in the 1950s and 1960s) and a search for a policy approach that could work to deal with this issue and the government stumbled on it,” he said.

Cheddar might not be on many Canadians' dinner plates — but its legacy lives on.

Bringing a diverse and varied

Bringing a diverse and varied set of opinions to a subject is a crucial part of solid journalistic work - but maybe we should all agree to stop quoting the Fraser Institute - there has to be a less tainted source to go to for counter argument.

Yeah. Beyond just being

Yeah. Beyond just being utterly predictable right wing ideologues, they're known for falsifying statistics and ginning up arguments for anyone who will pay. If there's an unsavory side to an argument, from tobacco on to the present, they've been in there pitching for it--often using distortions, downright lies, and strikingly poor research. Surely there still have to be some right wing ideologues out there to quote who are basically sincere scholars rather than crooked mercenaries.

Hear, hear on the Fraser

Hear, hear on the Fraser Institute. Total idealogical B S

"in December 2018 the average price of American cheese was $15.60 per kilo — 46 cents more expensive than in Canada."
And don't forget currency exchange rates, which would make American cheese not only a few cents, but several dollars more expensive than Canadian.
The real tragedy of allowing US dairy into Canada is that we used to be able to be sure that Canadian dairy products were free of rBST bovine growth hormone. But even with the tariffs, a Canadian mozarella producer in Alberta imported concentrated milk from the US, because he couldn't get it in Canada.
So we now have our own cheese products contaminated with all the substances that Dr. Shiv Chopra "saved us from."
I'm not a fan of cheese: it's far too fat and has a too-high sugar content to be healthy for human consumption, even if everything else is hunky dory.
We also, for some time, "resisted" ractopamine additives in Canadian animal feed (for beef and pork: maybe it's used for milk cows as well, I don't know) ... but eventually gave in because the US does it and gosh, we hadda make all our jellybeans the same size, eh, boyz? (During the 3 amigos "talks" aimed at "harmonizing" regulations between the NAFTA countries, Harper passed it all off as "standardizing the size of jellybeans" ... i.e., nothing to get excited about. But those same "harmonized" regulations have "forced on us" the druthers of Big Ag: i.e., the piggy-greedy corporate farms and distribution companies have cowed our government into accepting even more things that are very bad for human health.
One more reason to avoid meat and dairy.

. . . because there are no toxic substances or Big Ag involved in the production of plants? Sorry, you can't avoid your way to a healthy agricultural sector, and unless you're particularly well off you can't even avoid your way to personally healthy food. We need to take on the Big Ag directly. Canadian (well, world really) agriculture needs to be fundamentally transformed.
But not, I think, by giving up supply management.

This was a good article, but

This was a good article, but now I'm left curious: What exactly is the connection between cheddar overproduction, the supply management system, the rise of non-cheddar production relative to cheddar, and the continuing use of cheddar as a benchmark? I can sort of imagine but I don't think it ever pulls the threads together.

I regularly check milk prices in the USA. Very close to our price in equivalent dollars. The Fraser Institute and Former MP Bernier want to eliminate supply management to increase competition. Certain products like fluid milk are not good candidates. Our Canadian system gives us a stable priced milk supply at NO GOVERNMENT SUBSIDY. No taxes supporting dairy farmers. Wisconsin in the USA has more dairy farms than all of Canada and state and federal governments pay millions. So Fraser Institute, suck it up and leave dairy alone. Your imagined perfect market is a joke. In the 1950s the price of milk varied so much my parents never knew what to budget and therefore we did without bottled milk when the price rose. I prefer this system vs a fallible ideological neoliberal system that has left most Canadians much poorer over the last 4 decades. Buy your cheese on sale. Paying more than a $1.10 per 100 grams is too high for cheddar and about $1.75 for others.

It wasn't until the last

It wasn't until the last comment that mention was made of the U.S. subsidization of their dairy industry. One report (yes, Canadian in origin) suggests that subsidy is greater than 20 billion dollars, and that over 70% of U.S. producer's profits are attributable to those subsidies. The Canadian dairy industry is healthy without government subsidy (i.e. re-routed tax dollars). The industry is borne by its consumers, as it should. Unfortunately, I am no longer a dairy consumer, having developed an intolerance. I miss milk and cheese in all their forms.

I stand to be corrected if I

I stand to be corrected if I am wrong. I understand under the new NAFTA agreement, negotiated by our current government, Canada agreed to take a larger percentage of milk from the United States, I believe it was 3 or 5 percent. As a result of this the Canadian government now has to subsidize Canadian Farmers in Quebec and no doubt other parts of the Country because we have an over supply. Also, these negotiations could have included a provision that Canada would not accept any American milk that had the growth hormone which is banned for use in Canada. As Canadians we lost big on the new NAFTA in general (I understand about 17 Billion per year over the previous agreement)) and we lost on dairy not only in terms of production but also we are now being forced to consume a substance banned in Canada