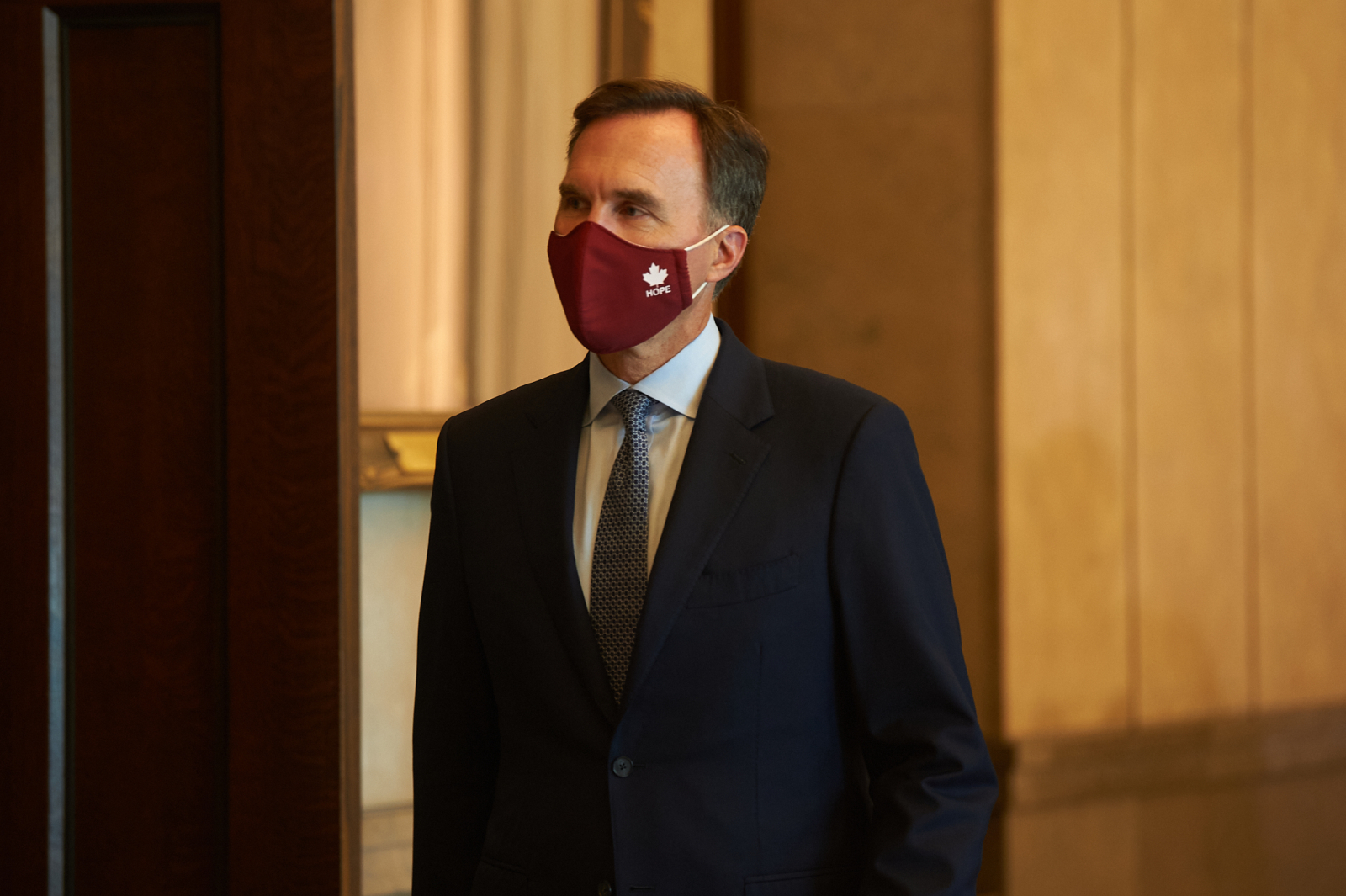 The events happened in the summer of 2019, in the run-up to the 2019 federal election. In response to the commissioner’s findings, Morneau signed an undertaking, or agreement, to pay a $300 fine and post a link to the ruling on his website and social media accounts for 30 days.

“Ministers are prohibited from using public resources and funds from their departmental budgets for partisan purposes,” said Commissioner of Canada Elections Yves Côté, an independent officer, in a ruling posted online Thursday.

Morneau resigned his place in cabinet and his seat in Parliament last month. He said he had never intended to stay until the next election, but the former finance minister was also under fire for his role in the WE scandal.

“In this case, as soon as the undertaking was finalized and signed by both Mr. Morneau and the commissioner, the information was made public,” Croussette said in an email.

The events examined by the commissioner were a Chamber of Commerce meeting in Oakville, Ont., on July 29, 2019, and a tour of a Caledon, Ont., business on Aug. 27, 2019. In both cases, Morneau appeared in his official capacity as finance minister and promoted Liberal candidates.

The “known quantifiable costs” of the events totalled $1,661, the election commissioner found.

“Introducing and promoting prospective (Liberal Party of Canada) candidates at the events promoted the LPC's electoral prospects in these electoral districts,” wrote Côté.

“This caused the expenses related to these events to benefit the LPC.”

In the ruling, Côté noted that the Liberals had paid the government back for the expenses. Morneau and his staff also co-operated with the investigation and Morneau’s staff had been given training to ensure it doesn’t happen again, Côté said.

“There is no indication that Mr. Morneau intended to use public resources for directly partisan purposes,” Côté wrote.

“Nor is there any indication that Mr. Morneau personally participated in planning any of the tours in question.”

The Prime Minister’s Office directed a request for comment to the office of Dominic LeBlanc, Minister of Intergovernmental Affairs and the President of the Privy Council.

In a statement, Corinne Havard, a spokesperson for LeBlanc's office, said the government accepts Côté's decision. She also noted that the Liberal government strengthened Canada's election rules prior to the 2019 election.

"During the last Parliament, we strengthened the Canada Elections Act to increase transparency and accountability," Havard said in the statement. "We respect the Office of the Commissioner of Canada Election, who operates independently to ensure compliance with the act."

This story was updated to include more information from the Office of the Commissioner of Canada Elections, and to correct the last name of the election commissioner.

This story was updated to include comment from the government.

Let's face it, the guy's gone

Let's face it, the guy's gone already. The fixation of Canadian media on exposing Liberal scandals while the World literally burns around us, is ludicrous.

Let's face a lot of things

Let's face a lot of things normally swept under the carpet. Intitlement makes a certain portion of our population simply assume that they can do no wrong............since their intentions are so pure. The article is factual, acknowledges Morneau likely was simply a bit stupid about what constitutes a violation of election rules, but minimizing that kind of personal use of one's public office is exactly why we get scandals like SNC and We.

He's gone already? Seems to me he remains as a Liberal MP.........and that may not be 'gone' enough for some of us. Twice now, he's exhibited his privilege in public..........let's not minimize that into a third time down the road.

Absolutely, Mary! Having participated in election campaigns - squeakingly HONEST ones - I can attest to all the mind-boggling efforts to keep track of campaign spending EXACTLY according to the rules - which are NO SECRET!! It can be done! The discrepancies were most likely carried out by Mr. Morneau's minions, BUT he is still ultimalely responsible!
The other egregious issue here is the nature of Morneau's plans, according to this article, which states that "he had never intended to stay until the next election". In real life, this indicates a goal of beefing up one's resume for only as long as it makes one look good - pretty much the essence of "what's in it for me?"!!
By the way, the article also states Morneau resigned BOTH his cabinet position AND his seat in parliament. If this is the case, then, Mary, he seems to be truly gone... maybe doing as the party seems to be doing - exit before they have to face the nasty music!
A further point is the answer to the question to the Elections Commissioner's office about what took so long for the investigation findings to be made public. The fact that information can only be revealed after the investigation is completed, and only if the commissioner chooses to take action, rather smacks of in-house protectionism...

Again, it's his responsibility to know the rules, and to act within them.

The point was not what

The point was not what intention was, but what was done.
You've heard the old saw, about the road to hell being paved with good intentions. It's applicable.
As for whether he personally participated in planning, he's responsible for the activities and actions of his people. And the words came out of his own mouth. How is that "unintentional"? An individual with his level of responsibility is certainly expected to be able to control his own mouth. He certainly does so when he's been coached to stick to talking points.