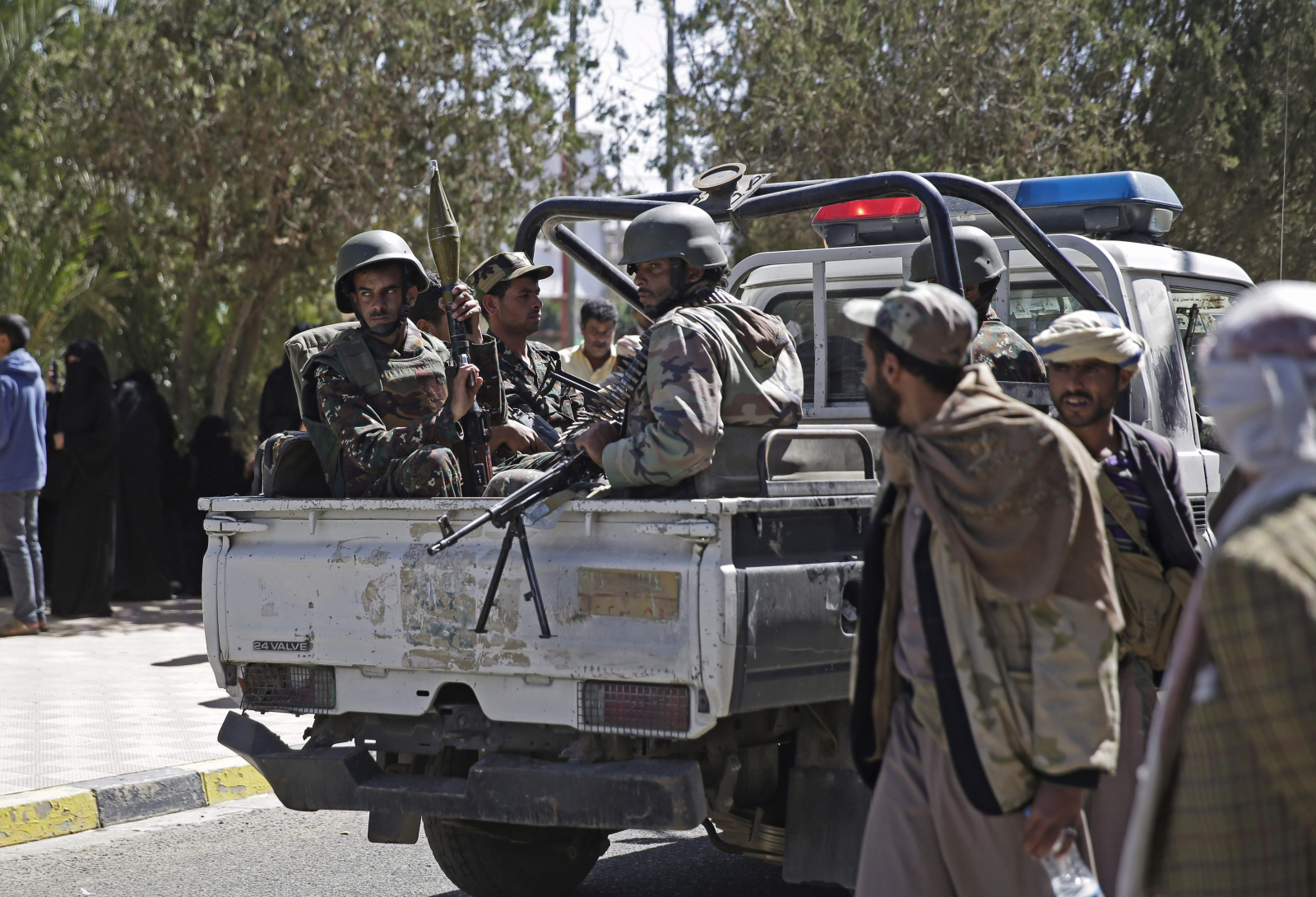 Yemeni soldiers secure Sanaa Airport ahead of arrival of Houthi prisoners after being released by the Saudi-led coalition in the airport of Sanaa, Yemen, on Nov. 28, 2019. (AP Photo/Hani Mohammed)
Previous story
Next story

A United Nations report listing Canada as one of several countries who helped support the war in Yemen by supplying arms to Saudi Arabia will stain its reputation in the international community, according to a political analyst.

Anthony Fenton, a doctoral student at York University who tracks Canada’s relations with Gulf-Arab states said the latest UN report, which named Canada alongside countries like France, Iran, the United Kingdom and U.S. as perpetuating the brutal war in Yemen through arms deals, is sure to “ruffle some feathers in Ottawa.”

The UN report is one of three that have been published since the onset of the Yemen conflict which began in 2015. Each report has consistently concluded that all parties involved in the conflict have committed human rights violations. The latest report, which was put together by a group of experts in the region including Canadian professor Ardi Imseis, was the first to name Canada as a perpetrator of war.

Saudi Arabia has consistently been supplied with arms from the Canadian government, since signing a $14 billion deal in 2014. In 2016, Trudeau’s government approved export permits to ship over light armored vehicles (LAVs) made by General Dynamics Land Systems, a London, Ont.-based manufacturer.

Fenton said there have been several contracts running concurrently that have either provided new LAVs to Saudi Arabia or to upgrade LAVs previously distributed to the state.

“We never know 100 per cent which orders have been fulfilled,” said Fenton, who is researching the political economy of Canada and the Gulf states for his dissertation. “We just know the bulk dollar amount of what’s been shipped by virtue of Statistics Canada.”

The most recent figures from the data agency show that as of July 2020, Canada had exported another batch of LAVs worth $866-million to Saudi Arabia.

The Canadian government has been previously criticized for their arms deals with Saudi Arabia. In 2019, footage from Yemen showed what looked like Canadian LAVs being captured and destroyed by rebel forces.

The federal government reviewed their contracts with Saudi Arabia afterwards, but said in a memo for then Foreign Affairs Minister Chrystia Freeland, that there was “no credible evidence” linking Canadian military exports to human rights violations committed by the Saudi government.

Fenton anticipates that Canadian officials might push this justification when it comes time to discuss the “embarrassing” findings of the report within the international community. But he said that justification misses the mark.

For the first time, Canada was named a perpetrator in the Yemen war for providing arms to the Saudi Arabia-backed coalition forces by the @UN. #cdnpoli

“The point is that on the whole these weapons, provided by foreign Western governments in particular, are fueling the war in Yemen,” he said. “By no means should we be selling weapons to Saudi Arabia, not only because they may be used in Yemen, but they may also be used against Saudis.”

“The longer the war goes on the worse it is for the people of Yemen, no doubt about that,” he added.

How far Canada has fallen as peacekeepers & defenders of human rights around the world.

Under @JustinTrudeau, Canadian shipments of military goods to Saudi Arabia hit a record high in 2019, while Yemen men, women & children die as a result. #cdnpoli https://t.co/S6YpspE1L1

As the conflict has dragged on for four years, Yemen has been divided —- Houthi rebel forces, who oppose the rule of Yemini-president Abdrabbuh Mansur Hadi, have taken control of the western side of the country which encompasses the country’s capital Sanaa. Hadi’s forces, which are backed by Saudi Arabia, where he currently resides, still hold control over most of the country.

UN reports on the conflict have always maintained that all parties have shown “no regard for international law or the lives, dignity, and rights of people in Yemen.” The latest report cites instances of murder, torture, rape and inhuman treatment of Yemeni civilians as well as reports of children under the age of 15 being recruited to fight.

The country has also been faced with an ongoing famine as a result of the war. A UNICEF report estimated that 2.4 million Yemeni children could be severely malnourished by the end of the year.

“Yemen remains a tortured land, with its people ravaged in ways that should shock the conscience of humanity,” said Kamel Jendoubi, the head of the Group of Experts who penned the latest report.

In the past, when Prime Minister Justin Trudeau had been pressed on canceling the Saudi contracts, he said pulling out of the deal could cost Canada a penalty in the billions of dollars. In 2018, the federal government was once again pressured to pull out of the deal after the assassination of journalist Jamal Khashoggi on Saudi soil.

But in 2019, instead of backing out of the deals, Canada announced in April 2020 that the contract had been renegotiated to include a more ”robust” permit-review process for the LAVs.

“Under our law, Canadian goods cannot be exported where there is a substantial risk that they would be used to commit or to facilitate serious violations of international humanitarian law, international human rights law or serious acts of gender-based violence,” said the statement from Minister of Foreign Affairs François-Philippe Champagne.

Fenton said, in a way, Canada is economically locked into lending arms to Saudi Arabia, the world’s biggest oil exporter.

Fenton says Canada, like most Western governments, are looking to get a cut of the Saudi oil market amongst other things. On the federal government’s page outlining relations with Saudi Arabia, it states “Canada is seeking to diversify its relations with the Saudi Kingdom.”

And so, Canada is in a position where arms deals might open the “floodgates” to the rest of the Saudi market.

“Then we can get our fair share of the hand-over-fist petrodollars that all Western governments want and have wanted for decades,” he said.

The latest UN report, the first where Canada is explicitly named, could force the Canadian government to come to terms with the consequences of the arms deals or, Fenton said, it might push back with plausible deniability that Canadian products were not directly involved with the atrocities of the Yemen war.

“It's a stain on their reputation because other people read these reports in Geneva, where these things are discussed,” said Fenton. “There are going to be some embarrassing conversations.”

Too often, when we look

Too often, when we look beneath the surface rhetoric, Canada's international reputation is something other than what Canadians want it to be. Our role in Haiti was shameful as well, though few know it. Trading with Saudi of course is another level of corrupt, since as the article states............we want those petro dollars.

Still: if we pay attention to our role in foreign affairs, we shouldn't be surprised we lost that seat on the Security Council.........the UN doesn't need one more American stooge with veto rights.

When we have the courage and the ethics to pursue an independent foreign policy, based on our rhetoric of respect for human rights, self determination, etc. etc., we'll have better luck. Until then, Canadian hands have Yemeni children's blood on them....deny it as we will.

Yes indeed. Also there is

Contracts are made, and

Contracts are made, and contracts can be broken. The question revolves around acting on the ethical reasons for ‘illegally’ cancelling a contract to a nation that does not respect Canada and the rule of law. Action to cancel can be based on the proof that the LAVs have been used to blatantly violate human rights in a neighbouring country.

Anticipating and budgeting in advance for the repercussions would be good planning. It could, if the politicos had their act together, lead to establishing better rules for future contracts which should be instantly cancelled under certain clauses if the use of Canadian-made military equipment was discovered to be used to abuse human rights and wage unjustified wars on other nations.

I believe purposely breaking this contract will be supported by the majority of Canadians as long as GDLS can be supported to continue to employ Canadians and not encounter any loss of business. Pulling an export permit would mostly harm the contracted company without that support. Where support is given, it would likely consider that a sale is a sale no matter who the customer is, but also be put on notice that future contracts will be different. Why not quickly negotiate a replacement contract with GDLS for the undelivered LAVs for use by the Canadian army, possibly with a portion sold to our democratic allies at cost plus, and cover any legal costs the company may experience for breaking with the Saudis.

Who gives a fig about Saudi Arabia? It does not respect Canada. It will not be damaged in any way if it did not receive the balance of these military vehicles. It’s rich and can sue, but Canada is rich too and has an exceptionally professional legal system with expertise in international law to defend the decision to cancel the contract based on human rights violations. Not long ago the Saudi’s sent a hit team to Canada to assassinate one of its former intelligence officers who is hiding out here with his family, most of whom are under Canadian protection. Border Services became suspicious and barred the majority of the hit men from entering. This was weeks after the Saudi leader ordered the murder of journalist, democrat and critic of the Saudi regime, Jamal Khashoggi on foreign soil.

Breaking the contract will likely lead to a Saudi boycott of Canadian goods and services (such as they are), and for exports of oil to the Irving refinery in New Brunswick from the Kingdom. Big deal. In an age when oil has entered decline trends on multiple fronts, this may be an ideal time for the federal Liberals to connect their overly-abundant rhetoric to real action on a green recovery plan, and also to recover their moral centre. The future is electric. And Canada has that in abundance ready for the domestic land-based economy. Under no circumstances should this idea be misinterpreted as an opening for the resurrection of the Energy East pipeline when eastern energy is already saturated with hydro power.

Please pull that export permit, Justin. You’ll be completely justified in calling it an ethical decision.