The science of light and California's orange skies 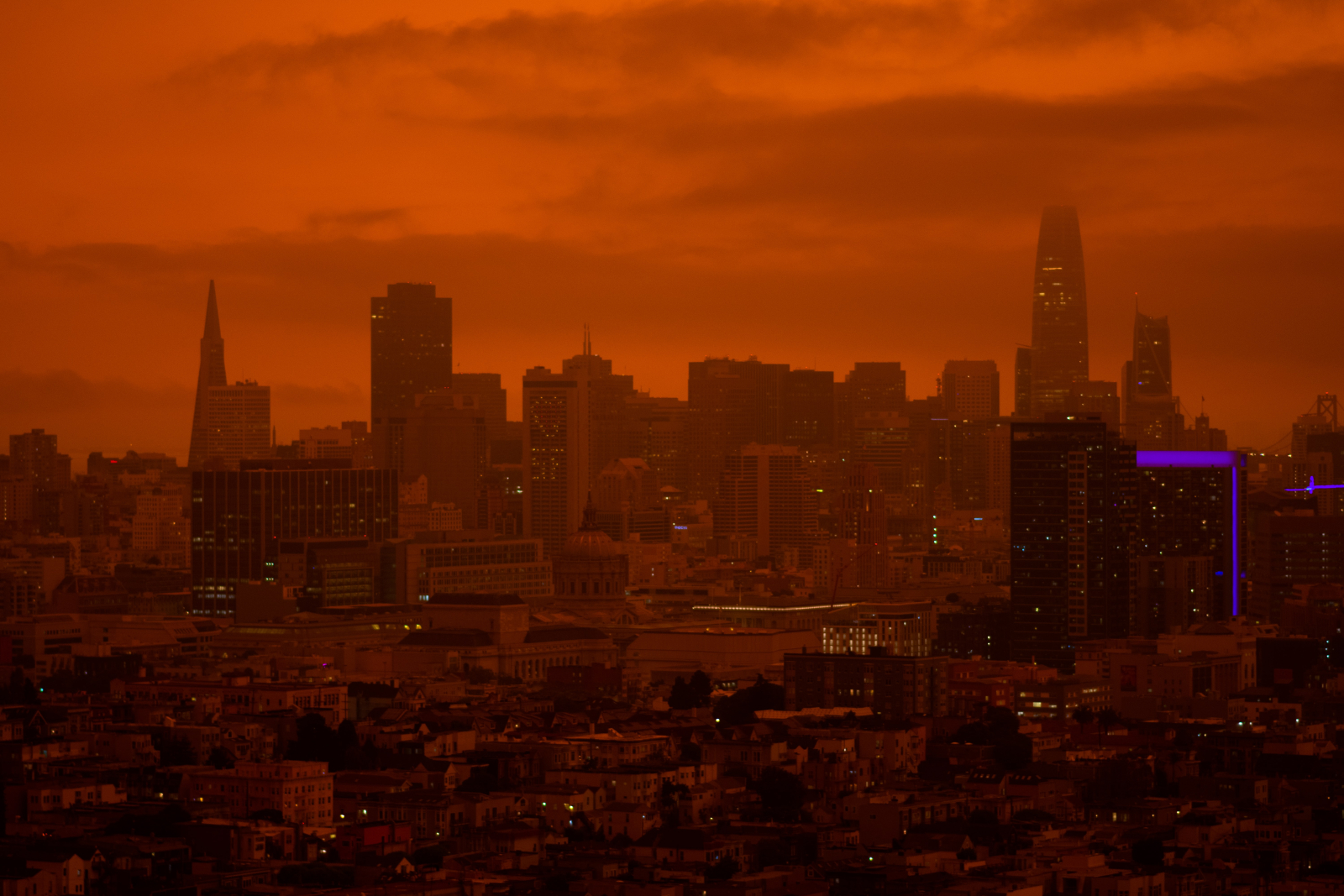 Fire is causing a sunless sky the color of the Golden Gate Bridge in the California Bay Area . Photo by Patrick Perkins on Unsplash
Previous story

The sky above San Francisco was the color of television, tuned to the president.

To be fair, I stole that punch line from Twitter, and nerd-lit snark about Donald Trump’s apparent choices in his alleged makeup won’t fix climate change and the worst North American fire season on record. Nearly 100 fires are burning across the West, driven by lightning sieges and dry wind blasting through drought-parched, beetle-eaten forest and chaparral. So far flames have consumed 3.4 million acres, including entire towns and more than 1,000 homes.

But none of that explains what happened to the sky.

Residents of California’s Bay Area didn’t think it was funny to wake up Wednesday morning to a sunless sky the color of the Golden Gate Bridge. Street lights didn’t turn off; the massive Sutro broadcast antenna poked through the haze like a mechatronic Eye of Sauron; and an angry-magma glow suffused everything, like being caught in just one stripe of a fabulous sunset. Amid despondent half-jokes about plagues of darkness, twilight at noon, and a city cosplaying Blade Runner 2049, westerners wondered: No but really, why is the sky that color?

The reason for the orange—and for the wan yellows and sickly grays that followed—is a combination of atmospheric chemistry and the physics of teeny-tiny things.

More proximately, the cause was, duh, fires. Many are so big and so hot that they create pyrocumulonimbus clouds, or “fire thunderstorms,” that send soot and smoke all the way up the atmospheric column, 50,000 feet into the stratosphere. The heat also generated unusual winds that carried smoke from the Sierra Nevadas to the coast.

All that gunk literally blocked out the sun. At least, some of the sun—the devilish hue was in the details. “I’ve never seen anything like that. I’ve been to polluted cities, but you never get that deep orange, ominous color,” says Sanaz Vahidinia, a physicist at NASA Ames Research Center who studies aerosols and light scattering. “Usually in polluted cities, it’s this mucky color, more like the sepia color I’m seeing now, maybe a little dimmer. It was really fascinating.”

First, the chemistry side. Smoke is what’s left after something burns, reduced to particles; that might be hydrocarbon molecules or soot, which is just straight-up black carbon. Now, the thing to remember here is that even though unfiltered noontime sunlight looks roughly whitish or whitish-yellow, it actually contains a roughly equal amount of every wavelength of light, from the reddish end of the visible spectrum to the bluish, all mixed up in a subatomic pointillist spray. And even though you’re likely to associate carbon-heavy things like oil or coal with the color black—absorbing light from across the visible spectrum—carbon atoms actually have a preference. They absorb and also scatter more longer-wavelength red hues than shorter-wavelength blues. “The soot particles are absorbing the blue light from the sun, and we don’t see it,” says Mark Marley, a researcher at NASA’s Ames Research Center who studies the atmospheres of planets outside Earth’s solar system. Those particles absorbed or scattered back the blue—but let that Mordorish red-orange through.

That smoke wasn’t the only layer in the sky. A marine layer of moist air slid beneath it—San Francisco’s famous Karl the Fog, creeping in like steamed milk beneath the foam of a third-wave latte. Here’s where some physics creeps in as well.

Unlike carbon, water vapor typically absorbs more on the red-orange side of the visible spectrum. But those water molecules, just two hydrogens and an oxygen, are also bigger than most particles in smoke. And in the physics of light scattering, size matters. Down at the scale of a molecule or two, some hundreds of nanometers, light might refract and change direction around a particle or bounce off it and head back the way it came depending on its wavelength. Which is to say, different-sized particles interact differently with different colors of light.

"It wasn’t the end of the world, but it makes sense that it looked like it—after all, these intense fires were driven by drought and climate change." #CaliforniaFires

In fog, “those are bigger particles, so they scatter at all wavelengths,” Vahidinia says. “Normally that layer would’ve been a diffuse gray.” Bay Area standard, in other words.

But on Wednesday, the smoke acted like a filter, so Karl the Fog couldn’t play the blues. “You get a filter on top of the blanket of the marine layer, and that marine layer is multiply scattering whatever is coming to it,” Vahidinia says. “It’s not coming directionally. It was an orange haze all over the place.” That’s why the orange light seemed so omnipresent, so there.

Some folks said that the effect was like being on Mars, but the red light there (if there is any) comes from rusty dust blown into the thin atmosphere—aerosolized Martian regolith, if you’re a planetary scientist or a marooned astronaut. But well actually, Downtown Frisco, as no one is supposed to call it, probably looked more like Saturn’s moon Titan. Its thick atmosphere is full of blue-scattering hydrocarbons. The earthly airborne orange event was less The Martian, more The Expanse.

It was also just plain gross. Something about the light was pallid, an ill wind. Vahidinia thinks that gloomy lack of intensity might have been because of the sheer height of the smoke cloud—the stratospheric column of particles the light had to pass through before reaching the ground. That’s what put the light into the twilight zone. “The thickness of the column, that will play a role in dimming. If it’s pretty high and pretty thick, then it’ll play a role in how subdued the light is,” she says. “It won’t be vivid. Like if you’re looking at a sunset, the light has to go through more. It has this longer path, so it has more chances to scatter.”

So, why so orange? Smoke gave the specific hue. The ubiquity came from diffusion by the marine layer, and the wan desaturation was probably from the height of the cloud. The result: A photonic pachinko game that stopped at the light receptors of the human retina. (That’s a whole other thing.)

It wasn’t the end of the world, but it makes sense that it looked like it—after all, these intense fires were driven by drought and climate change. Unless people stop coughing so much carbon into the atmosphere, well, sometimes things look apocalyptic because they are.