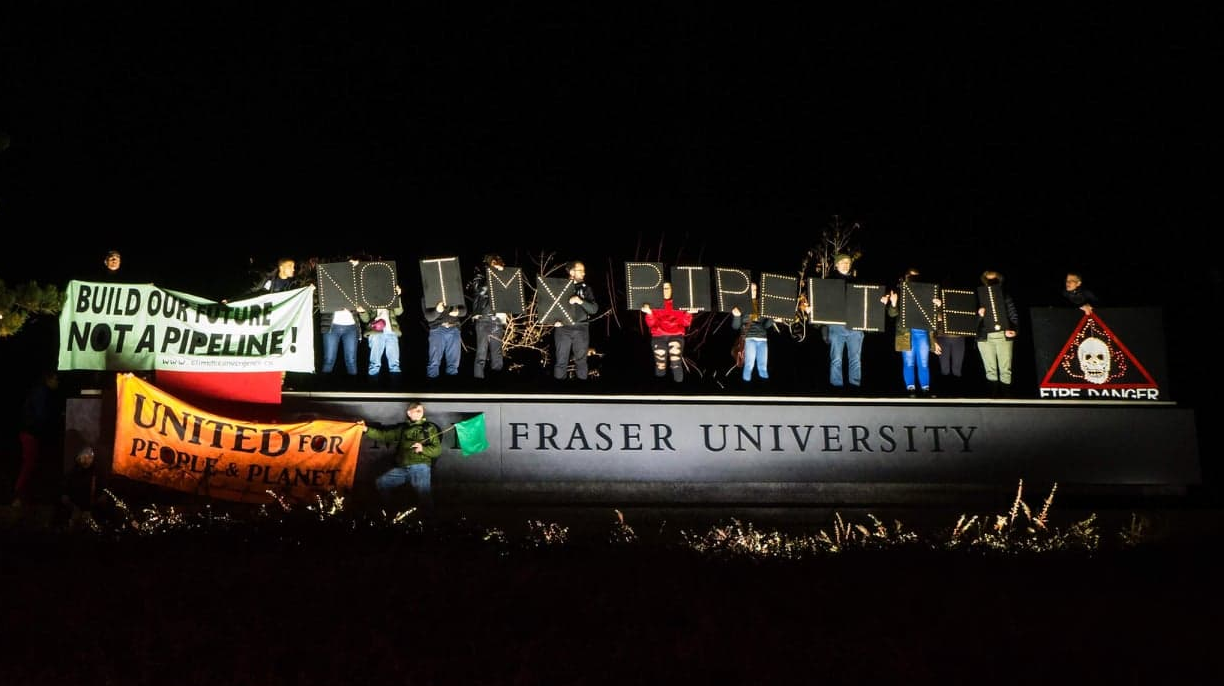 In an open letter signed by student unions from schools in Canada and the United States, the youth urged Trudeau to invest in Indigenous-led green infrastructure instead of pipelines. The letter comes as the government appears to back off from its initially lofty promises of a green recovery.

“We want Justin Trudeau and the federal government to commit to the green economy principles they promised us, and the climate action that they promised (in the last federal election),” said Christina Kachkarova, 21, a spokesperson for Justice, No Pipeline, a Simon Fraser University-based student group that organized the campaign.

“We want to know that we will have a safe future.”

Justice, No Pipeline is a subgroup of SFU350, a university club that’s connected to international environmental organization 350.org. Simon Fraser University is in Burnaby, B.C., near the endpoint of the Trans Mountain pipeline.

The open letter was backed by a litany of Indigenous, environmental and advocacy groups on both sides of the border. Kachkarova said American student groups chose to sign on because much of the oil flowing through Trans Mountain is bound for refineries in Washington state.

The Trudeau government bought Trans Mountain and the expansion project (TMX) in 2018. In the letter, the students said they are concerned about the project’s impacts on carbon emissions, opposition to the project from First Nations whose traditional territory it would run through, the risk of spills off the coast of B.C., impacts on marine wildlife and estimates that it could take hours for firefighting equipment to reach a Trans Mountain tank farm on Burnaby Mountain.

“We call on the federal government to direct funds towards green job-retraining initiatives,” the letter reads.

“It is not only workers who are directly involved in the fossil fuel industry who struggle in the wake of the downturn in oil markets, but those who are involved indirectly, many of whom belong to marginalized groups.”

The letter also pointed to questions about whether the pipeline will be profitable, and whether it’s a good investment at a time when the world is increasingly shifting away from fossil fuels.

In an open letter, students urged Trudeau to invest in Indigenous-led green infrastructure instead of pipelines. The campaign comes as the government appears to back off from its initial lofty promises of a green recovery. #cdnpoli

“Is the federal government ready to accept responsibility for putting the safety of thousands of people at risk, including those of young children, for a dirty pipeline that is not only unprofitable, but that counteracts efforts to mitigate climate change?”

Government plans to be outlined in throne speech next week

The open letter comes at a time when everyone from provinces and lobbyists to chambers of commerce to environmentalists are doing their best to sway the government ahead of the throne speech.

The throne speech will happen on Sept. 23. In it, the Liberal government is expected to outline its plans for the continuing economic and health crisis caused by COVID-19.

The speech also prompts a confidence vote. Since the Trudeau government holds a minority of seats, it must win the support of at least one major opposition party to avoid an early election.

When the prime minister prorogued Parliament last month, setting the date for the throne speech, he hinted at plans to fund green infrastructure as a way to help Canada’s economic recovery from shutdowns caused by COVID-19.

But that was last month, when COVID-19 was under control. In recent days, new case numbers have been rising again in what experts say appears to be a second wave.

The government’s tone has also shifted, with ministers saying COVID-19 is top priority.

“First and foremost, we have to be sure that we’re doing the things with our provincial and territorial counterparts to try to stem the rise and to ensure that Canadians will be safe,” Environment Minister Jonathan Wilkinson told reporters Wednesday.

“That being said, what the throne speech is intended to do is to outline sort of the broad parameters and the themes that will be important for the government over the course of the coming session of Parliament. Certainly in that context, the work to address the climate crisis is very important.”

“I guess it’s a little disappointing to hear, given that Canada is warming at twice the rate of the rest of the world,” she said, referring to the government’s rhetoric.

“It’s concerning to see how these policy changes and what they want to invest in will affect us long into the future.”

In a statement, Ian Cameron, a spokesperson for Natural Resources Minister Seamus O’Regan, pointed to investments the government has made this year to clean up aging wells in Western Canada and reduce emissions from oil and gas. He also pointed to investments in programs aimed at helping Indigenous communities use less diesel power, and to increase energy efficiency across Canada.

“Lastly, we will use the revenues from TMX — a project that is creating good, middle-class jobs today — to invest in a clean economy that will create jobs and attract investment,” Cameron said.

“We’re going to continue to work with our natural resource sectors and all sectors of the economy to build back better, cleaner and more resilient."

We have a government that

We have a government that invests billions in old fossil fuel infrastructures that have to run for at least 50 years to make any economic sense, and then drops a few million on Green community projects and student 'awareness' campaigns...........and no one on National Observer has anything cogent to say about that???

Makes me wonder two things. Are we all as afraid of CAPP and other Right Wing lobbies as we are of the Israeli lobby? Or do we not really understand the urgency of our situation. Still no money for universal good day care so the workers who are actually 'essential' can do their jobs; but we have billions to 'invest' in a technology we all admit has to be winding down? Furthermore, a technology that IS winding down, inspite of all the dirty money we can throw at it?

Why aren't we enraged by the waste? Saving our energy and rhetoric for attacking those safe injection sites?
We should be supporting our young people and working hard with them to ensure they have a liveable future. Piping raw bitumen to the States isn't it.