The faces and voices at a COVID-19 era climate protest 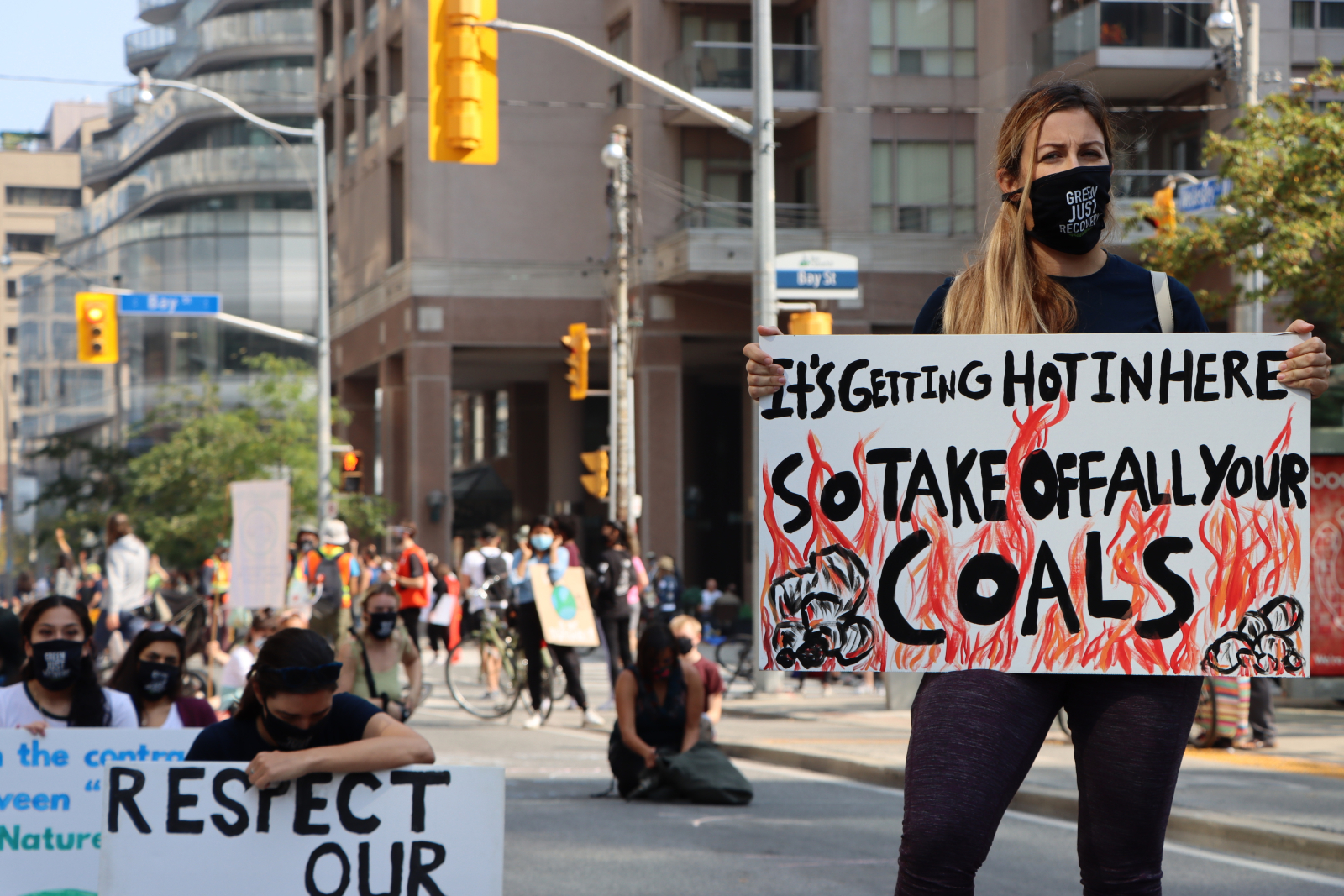 A young climate protester stands with a sign in Toronto on Sept. 25, 2020. Photo by Morgan Sharp
Previous story
Next story

Crowds of mostly young climate protesters took to the streets of Toronto, as well as cities and towns across Canada and the world, for the first time since the COVID-19 pandemic Friday. The co-ordinated actions inspired by Swedish teen activist Greta Thunberg were much smaller than last September's massive demonstrations due to constraints imposed by the pandemic, but participants say the need for them is more urgent than ever.

Here are some of the voices and (masked) faces of Toronto's climate protest movement.

“To me, it doesn't feel any different. Recognizing that we all have different access, different privilege, and we have to keep each other safe, whether in the streets physically (when) there's five of us or 500 of us. To me, it's just knowing that we stand for everyone.”

“My own friends, even in terms of what we're all posting about on social media, we’ve shifted our focus to more of a community-based focus and figuring out how we can help people.”

“I can't sit behind social media anymore. I think you have to show up for things you believe in. It's better than sitting behind a screen." Adam Kreeft #climatestrike

“COVID was a wake-up call for a lot of us to see, to have the time to see the different ways that people are facing injustice and inequity.”

“I can't sit behind social media anymore. I think you have to show up for things you believe in. It's better than sitting behind a screen."

“I just don't think being a vegetarian for 15 years is enough anymore, or making sure that my T-shirt is eco-friendly. Performative environmentalism is a dangerous concept and I think it's (more) about being here with the community than it is sitting isolated thinking ... what you're doing is helping.”

“It's a question of: ‘If we're all not here for this, what are we doing?’ If we're not worried about the environment, our everyday life is meh, you know?”

How do climate protests fit with other social justice movements?

“I'm an architecture student, and sustainability, especially in architecture, is near and dear to my heart. And I truly believe that we are the generation that is going to have to walk at the crossroads between a sustainable future and destruction.”

“Yes, but unfortunately in the coming years these crises are only going to get worse. And as they continue to get worse, it is going to be an even harder decision to make. I'd rather make that decision now while I'm still young and comfortable with coming out today.”

“It is incredibly difficult. Every person who can show up is a voice to be heard, but, unfortunately, I don't believe that it will have the same impact. But all we can do is try.”

“I wanted to show my support for something I'm really passionate about. I would rather be here than at school right now, I think it's really important to show up to things like this and support it.

“I feel like a lot of the politicians say they're going to do stuff and then they don't end up following through with it. Since last year, there have been a lot of broken promises that were made. Justin Trudeau was marching last year in Montreal and was promising all these things and didn't end up following through, so I think it's really important to hold our leaders accountable.”

“I'm here today because I believe it's important to stay educated on these topics, especially as a person who's going to be directly affected by these politicians and their broken promises. I think it's important to hold them accountable for their decisions and to prioritize the rights of Indigenous people and people of colour.

“I feel like COVID has brought some sort of melancholic unity to everyone and I feel like it's made them realize that we're all in this together and what we do collectively to do with climate and all these political issues it is all coming back to us.”

“As a matter of fact, we had to leave our apartment today because a landlord purchased us a new oven. This oven has such volatile organic compounds in it that we cannot be in our apartment. It's interesting that were I to be rich, I could hire someone to off-gas it for me, or I could buy a better oven. But for some reason, the rules are rigged such that people can make businesses based on harm. I'm here to protest that.”

“Not really, because we feel like we can identify who might be unwell, and we took out time to arrive here on an uncrowded streetcar, so as urban-savvy people, we felt safe doing this. There are so many cases in our public schools right now, so that's not exactly the place to be either.”

How does climate protest relate to COVID-19?

“I think that human pathogens and animal pathogens can only be really solved by intact habitats, and we must work extra hard to have clear air in order to stay healthy given the crises of this year.”

“Last year was more numerous, but this year I think the message is even more important with all the fires and the accumulation of urgency around us all the time.”

“To me, these issues are very closely related. It is always the people who are winning the so to speak game of life who are harming those lesser than them. Nature is voiceless, animals will never speak about extinction. It is much more readily available to us to speak about our fellow humans, and I do attend those protests too. They are no less important than climate.”

“I'm a big supporter of Fridays for Future, I've been coming almost every Friday ... A lot of momentum took place before COVID and our society can not be the same after COVID-19, after this pandemic. We have to have more opportunities to increase green energy jobs, a green way of life. We have to move away from fossil fuels, from plastics, we’re polluting our air. I want to give our future generations a world that is theirs.”

“Climate justice involves racial justice. We have to invest in our Black and Indigenous communities, start to defund the police. We should direct the funds that are going to the Toronto police right now, $1.2 billion, we should send it to our Black and Indigenous communities, the poor people who were marginalized and criminalized for years and years and years.”

“As a nation, we don't protest and we don't really engage. What will be the trauma that finally collectively brings us to the street? Is it going to be food shortages that are coming, whether they hit us this winter or next year?

“I'm optimistic in the sense that when pushed to a wall, we will react in a way that change will happen. My question to everybody is why is the wall so terrifying? How is this not everyone's breaking point?”

“We're all in a massive state of distress right now, and I think we are finding each other. I see more interconnectivity between queer people, Black Lives Matter, trans rights, returning the land, but we lack leadership. We do not have one leader of any political party who can tell a truthful Canadian story and engage us from a place of camaraderie.

“There is a vacuum of leadership in this country, so, yeah, I'm not hopeful because of that, but I groove on my neighbours, I think they’re good folk. Colonizers, but all right.”

Funny, I haven't seen a

Funny, I haven't seen a single protester come down with COVID19, and I've been protesting this BS in mask-free, non-social-distancing crowds of thousands in multiple cities since April.

The media is not your friend. There is no pandemic.

Nice to see everyone wearing

Nice to see everyone wearing masks.
We were all wearing masks at the Student Climate Strike in Halifax, NS yesterday too. Great turn-out !