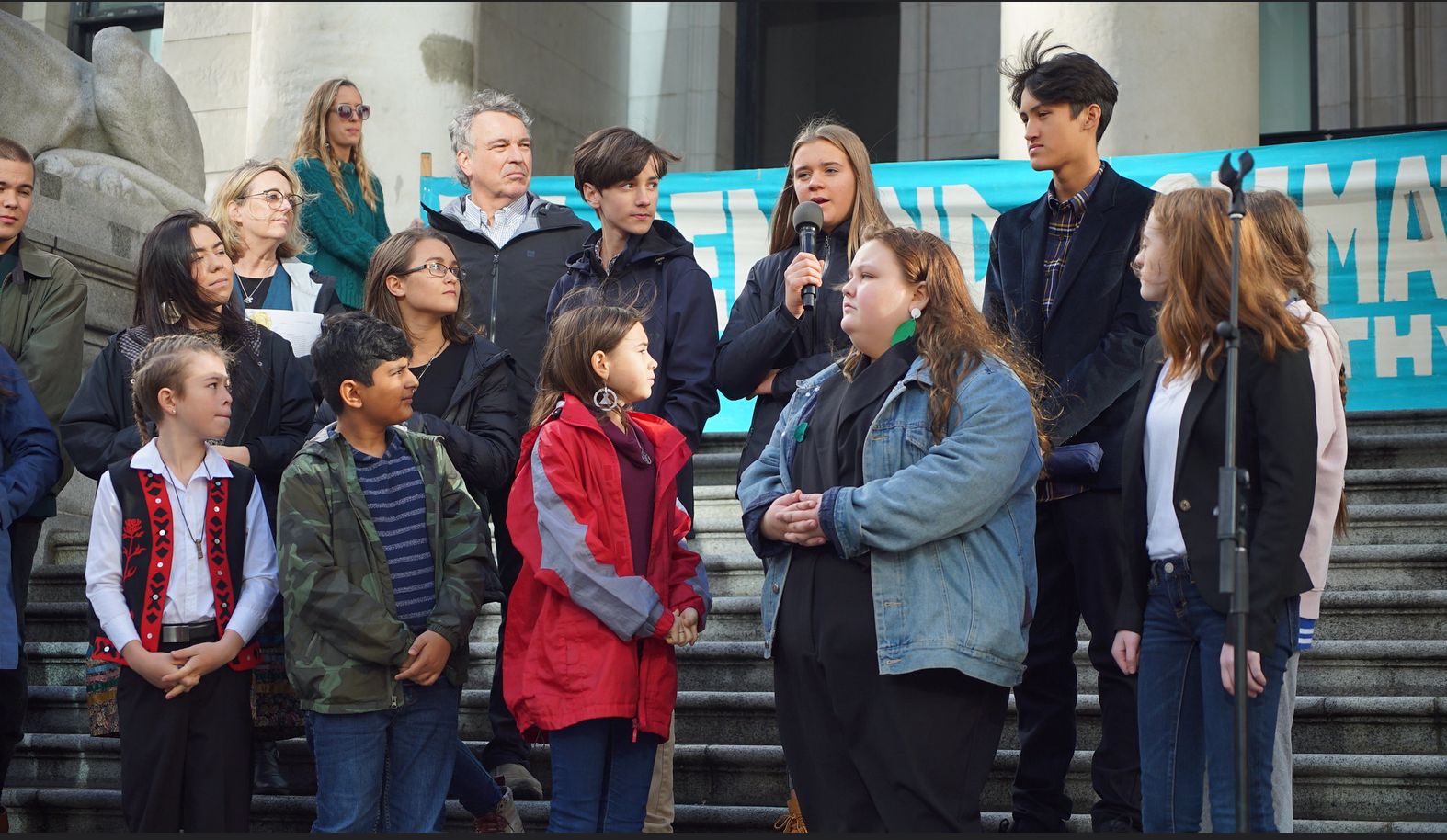 Some of the 15 young people suing the federal government speak to a climate protest in Vancouver on Oct. 25, 2019, the day they launched their legal challenge. Photo supplied by David Suzuki Foundation
Previous story

Lawyers for 15 young people from across Canada will plead with a federal judge this week to allow their legal fight for tougher climate action to proceed to trial.

The youngsters and their legal team argue that Canada’s actions, particularly its support of the country’s fossil fuel industry, have breached their constitutional rights to life, liberty, security and equality before the law.

They are also seeking to secure the concept of public trust doctrine in Canadian case law, arguing the federal government has a duty to protect natural resources, such as permafrost, for the benefit of the public.

The federal Liberal government will meanwhile seek to have the complaint dismissed, arguing that the plaintiffs’ arguments are “political, ideological and policy-oriented” and therefore not within the remit of the courts to judge.

The case is a key test of whether the climate policy decisions of government can be judged by the legal system. At question is whether Ottawa has breached the constitutional rights of the plaintiffs by not doing enough to limit the emission of greenhouse gases (GHGs).

“Our rights as young people, our rights as members of this country, are being infringed upon and the government is responsible for it, and they need to be held accountable,” said 16-year-old Cecilia La Rose, the lead plaintiff in the case.

“Dealing with climate change shouldn’t be left to politics. It’s not something we should allow to be used as a political weapon or pawn,” said La Rose, who lives in downtown Toronto and has had to quit competitive sport due to asthma.

For Lauren Wright, a Grade 11 student from Saskatchewan, increasingly extreme weather associated with climate change is making it more difficult for her extended farming family to earn a living.

“A huge part of our economy is based on agriculture and over the past couple of years, with all of the erratic weather we've been having, we’re seeing crops being lost and livelihoods being lost,” she said.

Colder winters and hotter summers are also directly hurting Wright, who is prone to heat stroke and severe sunburn and has Raynaud syndrome, which restricts her blood flow in cold weather.

Fifteen young people back by @DavidSuzukiFDN and @youthvgov want to sue Ottawa over its contribution to climate change. The feds want the case thrown out.

The plaintiffs’ legal filing argues that Canada contributes to overall GHG emissions by “promoting fossil fuel transport, export and import through interprovincial and international fossil fuel infrastructure, and by incentivizing fossil fuel exploration, extraction, production and consumption by way of industry subsidies,” pointing to the purchase of the Trans Mountain pipeline as one example.

That pipeline purchase has been a major disappointment for climate activists, some of whom heckled Prime Minister Justin Trudeau about it when he joined a massive climate march in Montreal last year.

“We’ve been forced to turn to the courts,” said 16-year-old plaintiff Ira Reinhart-Smith, calling the justice system the “only viable option right now.”

“We’ve tried the good old-fashioned way of protesting. We’ve tried all of the different ways,” he said. “The courts have the power to bring about change in Canada and that is what we need.”

The legal fight comes as Ottawa awaits judgment from the Supreme Court of Canada on whether it overstepped its jurisdictional authority by imposing a carbon price on provinces that do not have an adequate plan of their own to cap emissions.

The young people are not asking the court to tell the government what policies they should enact. They are instead seeking an order that Ottawa develop and deliver a plan to reduce emissions “consistent with Canada’s fair share of the global carbon budget” in order to help restore a “stable climate system.”

“This isn’t about policy, this is about government actions that affect, that have immediate, direct effect on the plaintiffs,” said Catherine Boies Parker, one of the lawyers at Arvay Finlay LLP who is representing the youths.

“Children and youth are particularly susceptible to the harms that manifest from climate change” given their still-developing physiology, she said. “And in addition, they are losing their childhood and their future in a way that everyone else has enjoyed.”

Future generations will also pay more of the higher longer-term costs of dealing with climate change, with delay only exacerbating those costs, she said.

The case is also being argued by Tollefson Law Corporation and backed by Our Children’s Trust and the David Suzuki Foundation.

The hearings are scheduled to begin in Vancouver on Wednesday and are expected to last two days.

In its written submission seeking dismissal of the claim, Ottawa says it is working hard to combat climate change, but that fighting it “requires an international effort engaging a multitude of complex policy and legislative considerations,” including geopolitics, energy, land use planning, transportation and other infrastructure, and the general state of the economy.”

The federal case mirrors a similar effort targeting Ontario’s provincial government, in which seven young plaintiffs are waiting to hear if they will get their day in court.

The young people in the federal case are looking to a Dutch example for inspiration, with the highest court in the Netherlands last year upholding a ruling that the country’s government must do much more to curb emissions.

A district judge in the United States in 2016 declined to dismiss a similar case, which also involved Our Children’s Trust, ruling that access to a clean environment was a fundamental right.

A circuit court later reversed the ruling, saying the youth should seek remedy from Congress and the executive rather than federal court. That decision is now the subject of an appeal.

One can hope the adult

One can hope the adult lawyers are better informed than the children they claim to represent, most of whom aren't remotely able to explain any of the statements they've been programmed to make. Using minors as props is probably one of the most unsavory practises of some branches of the climate action movement.